Effects of Nitrogen Content on the Structure and Mechanical Properties of (Al0.5CrFeNiTi0.25)Nx High-Entropy Films by Reactive Sputtering
Previous Article in Journal

Examining the Schelling Model Simulation through an Estimation of Its Entropy

John A. Marich and

The Schelling model of segregation allows for a general description of residential movements in an environment modeled by a lattice. The key factor is that occupants change positions until they are surrounded by a designated minimum number of similarly labeled residents. An analogy to the Ising model has been made in previous research, primarily due the assumption of state changes being dependent upon the adjacent cell positions. This allows for concepts produced in statistical mechanics to be applied to the Schelling model. Here is presented a methodology to estimate the entropy of the model for different states of the simulation. A Monte Carlo estimate is obtained for the set of macrostates defined as the different aggregate homogeneity satisfaction values across all residents, which allows for the entropy value to be produced for each state. This produces a trace of the estimated entropy value for the states of the lattice configurations to be displayed with each iteration. The results show that the initial random placements of residents have larger entropy values than the final states of the simulation when the overall homogeneity of the residential locality is increased. View Full-Text
Keywords: Schelling model; spatial analysis; entropy Schelling model; spatial analysis; entropy
►▼ Show Figures 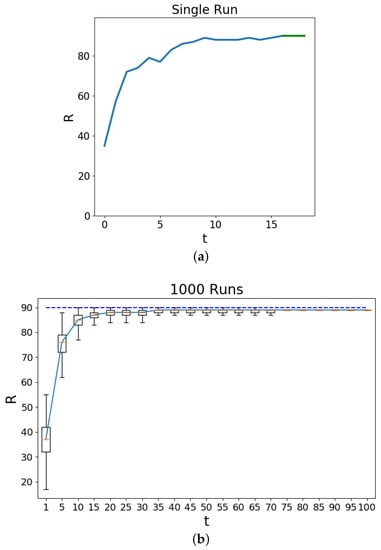