Criterion of Existence of Power-Law Memory for Economic Processes

Hierarchies can be modeled by a set of exponential functions, from which we can derive a set of power laws indicative of scaling. The solution to a scaling relation equation is always a power law. The scaling laws are followed by many natural and social phenomena such as cities, earthquakes, and rivers. This paper reveals the power law behaviors in systems of natural cities by reconstructing the urban hierarchy with cascade structure. Cities of the U.S.A., Britain, France, and Germany are taken as examples to perform empirical analyses. The hierarchical scaling relations can be well fitted to the data points within the scaling ranges of the number, size and area of the natural cities. The size-number and area-number scaling exponents are close to 1, and the size-area allometric scaling exponent is slightly less than 1. The results show that natural cities follow hierarchical scaling laws very well. The principle of entropy maximization of urban evolution is then employed to explain the hierarchical scaling laws, and differences entropy maximizing processes are used to interpret the scaling exponents. This study is helpful for scientists to understand the power law behavior in the development of cities and systems of cities.
Keywords: allometry; hierarchy; scaling; fractals; entropy; natural cities allometry; hierarchy; scaling; fractals; entropy; natural cities

Hierarchy is one of the basic characters of complex systems such as cities and networks of cities. A hierarchy can be mathematically described with a power law or a pair of exponential laws. In recent years, many scientists have been interested in the hierarchical structures of natural and social systems [1]. A fractal object is a self-similar hierarchy [2,3]. According to the ideas from fractal cities, a city or a system of cities can be treated as a hierarchy with a cascade structure [4,5]. A finding is that a self-similar hierarchy can be described with two or three exponential functions, from which it follows a set of power functions indicative of scaling [6,7]. This suggests that although the scaling in cities can be described with power laws, it can be understood through exponential laws. Scaling is a transformation that dilates (enlarges, increases) or contract (shrinks, diminishes) an object by a given scale factor. If the transformed result based on any scale factor bear the same structure with the original object, we will say that the process obeys scaling law [3,8]. The idea from scaling is very important to model scale-free phenomena. More and more scientists become aware of the importance of scaling analysis in urban studies [2,4,6,9,10,11,12,13,14]. Meanwhile, a number of puzzling issues arise from the research on scaling of cities [15,16]. Many questions are still pending and require much more studies before finding satisfying answers to them. Anyway, scaling laws often reveal the general principles underlying the structure of a physical problem [17]. Scaling analysis is an effective approach to urban spatio-temporal and hierarchical modeling. Scaling relations take on power laws, and a power law can be decomposed into two exponential laws based on hierarchical structure. Exponential laws can be derived by using the method of entropy maximizing [7], and this implies that the principle of entropy maximization can be utilized to interpret the power laws and thus explain the scaling behaviors of cities.
The hierarchical scaling laws are associated with many mathematical laws of cities. The models are found and reconstructed by Chen [6], who once explored the relationships between Zipf’s law [18], Christaller’s central place hierarchy [19], Beckmann’s city hierarchy model [20], Davis’ 2n rule [21], and Berry-Woldenberg’s analogy between rivers and central places [22]. Hierarchical scaling analysis can be employed to de-noise city rank-size distributions and reveal the regularity of urban evolution. This paper is devoted to revealing and describing the deep structure of systems of natural cities using the hierarchical scaling relations. We agree with Pumain [1] who once argued that the analysis of the hierarchical organization of complex systems such as cities can provide new insight for understanding systems’ evolution and emergence of order. The main contents of this paper are arranged as follows. In Section 2, to make it easier for readers to understand this work, the mathematical expressions of exponential laws and power laws for hierarchical structure are illuminated. In particular, the principle of entropy maximization is employed to explain the power law behaviors of natural cities. In Section 3, three hierarchical scaling laws are applied to the data sets of natural cities from the U.S.A., Britain, France, and Germany, and the results are illustrated with the ideas from hierarchical scaling. In Section 4, the main points are summarized, and the related questions are discussed. Finally, we reach the chief conclusions of this study.

The urban hierarchy with cascade structure can be described from two complementary angles of view. The longitudinal distributions can be described with exponential functions, and the latitudinal relationships can be described with power functions [7,23]. Considering a geographical region with n cities, we can organize the cities into a hierarchy comprising M classes according to the generalized 2n rule [7,24]. Based on the top-down order, the cascade structure of the urban hierarchy can be modeled by a set of exponential functions such as: where m refers to the order number of city class (m = 1, 2, …, M), Nm denotes the number of cities of order m, correspondingly, Sm and Am represent the average population size and average urban area at the mth class. The parameters are as below: N1 denotes the number of the top-class cities, S1 and A1 are the mean size and mean area of the first-class cities, rn = Nm+1/Nm refers to the interclass number ratio of cities, rs = Sm/Sm+1 to the city size ratio, and ra = Am/Am+1 to the urban area ratio. Generally speaking, N1 = 1, but for the three-parameter Zipf’s distribution, N1 > 1 [25]. Equations (1)–(3) compose the mathematical expressions of the generalized 2n principle [7], which is based on Beckmann-Davis models [20,21]. Davis find the 2n rule that says that if the cities in a geographical region are organized into a hierarchy by means of a fixed size ratio rs = 2, the number ratio of the cities at different levels will be 2, that is, rn = 2 [21]. This principle can be generalized to the following statement: if the cities in a region are organized into a hierarchy with cascade structure by means of a fixed number ratio rn = 2, the size and area ratio of the cities at different levels will range from 1 to 3, respectively, that is, 1 < rs < 3, 1 < ra < 3. The is called generalized 2n rule of hierarchies of cities [7,24].
Among this set of exponential functions, the first equation represents the number law, the second equation represents the size law, and the third equation represents the area law of urban hierarchies [6]. The three exponential laws can be derived by using the method of entropy maximizing [7]. For a self-similar hierarchy, if rn = 2 as given, then it will follow that rs→2, and if rs = 2 as given, then it will follow that rn→2, where the arrow denotes “approach”. If rn = rs = 2, the generalized 2n principle will return to Davis’ standard 2n principle. In this instance, we will have Tm = NmSm = N1S1 = S1, where Tm denotes the total population at the mth level. This suggests a property of hierarchical conservation of size distributions, which is consistent with the standard 2n rule of cities. If a hierarchy of cities complies with Davis’ 2n rule, the total population size at each level of the hierarchy is theoretically a constant.
A set of Zipf’s models is hidden behind the three exponential laws. This suggests that Zipf’s distributions can act as an indication of the self-similar hierarchy. From Equations (1)–(3) we can derive Zipf’s laws of population size distribution and area size distribution. The city size can be measured by both population quantity and urbanized area. The former is termed population size, and the latter is called area size of a city. Where population size distribution is concerned, three types of Zipf’s models can be derived [26]. If rn = rs, we can derive a one-parameter Zipf’s model, S(k) = S1/k, where k refers to rank, and S1 is a parameter indicative of the largest city [27,28]. The one-parameter Zipf’s model is termed pure Zipf’s law in literature [29]. If rn ≠ rs, we can derive a two-parameter Zipf’s model, S(k) = S1/kq, where q is the second parameter indicating scaling exponent. If rn ≠ rs and the largest city cannot influence the whole geographical region, we can derive a three-parameter Zipf’s model, S(k) = C/(k + h)q, where h is the third parameter indicating translational factor, and C denotes proportionality coefficient [26]. Where there are rank-size distributions of cities which follows Zipf’s law, there is a hierarchy of cities with cascade structure, and vice versa [6,7].

The following are available online at https://www.mdpi.com/1099-4300/20/6/432/s1, File S1: Zipf’s law, hierarchy, and power law (XLSX). This MS Excel file is used to show how to transform a Zipf’s rank-size distribution into a self-similar hierarchy. According to the pure Zipf’s distribution, we generate a standard rank-size sequence such as 1, 1/2, 1/3, … Then according to the generalized 2n rule, we organize the rank-size sequence into a hierarchy with cascade structure. From the results, we can obtain three geometric sequences: the number of cities at the mth class, Nm, the total population of cities at the mth class, Tm, and thus the average population size at the mth class is Pm = Tm /Nm. The power law relation between Pm and Nm represents one of the hierarchical scaling laws. File S2: Datasets processed for hierarchies of natural cities (XLSX). This MS Excel file is used to show the original datasets on the natural cities of U.S.A., Britain, France, and Germany, and to illustrate how to organize the city size and urban area sequences into hierarchies with cascade structure. Using the results, we can verify the size-number scaling relation, area-number scaling relation, and the size-area allometric scaling relation.

Y.C. conceived, designed, and performed the experiments; Y.C. analyzed the data; J.B. contributed reagents/materials/analysis tools; Y.C. wrote the paper. Both the authors have read and approved the final manuscript.

This research was sponsored by the National Natural Science Foundations of China (Grant No. 41590843 & 41671167). The supports are gratefully acknowledged. Many thanks to the three anonymous reviewers, whose interesting constructive comments are helpful for improving the quality of this paper. 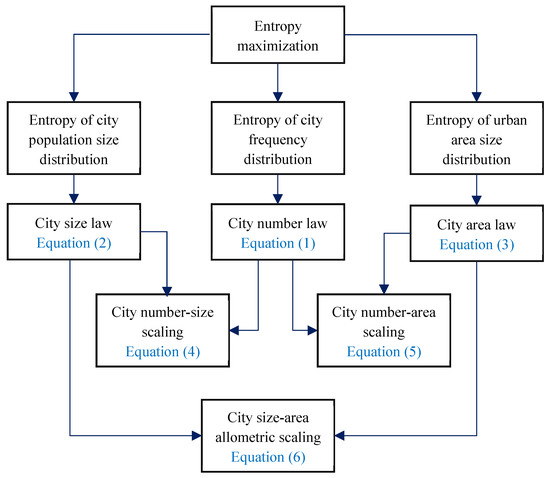 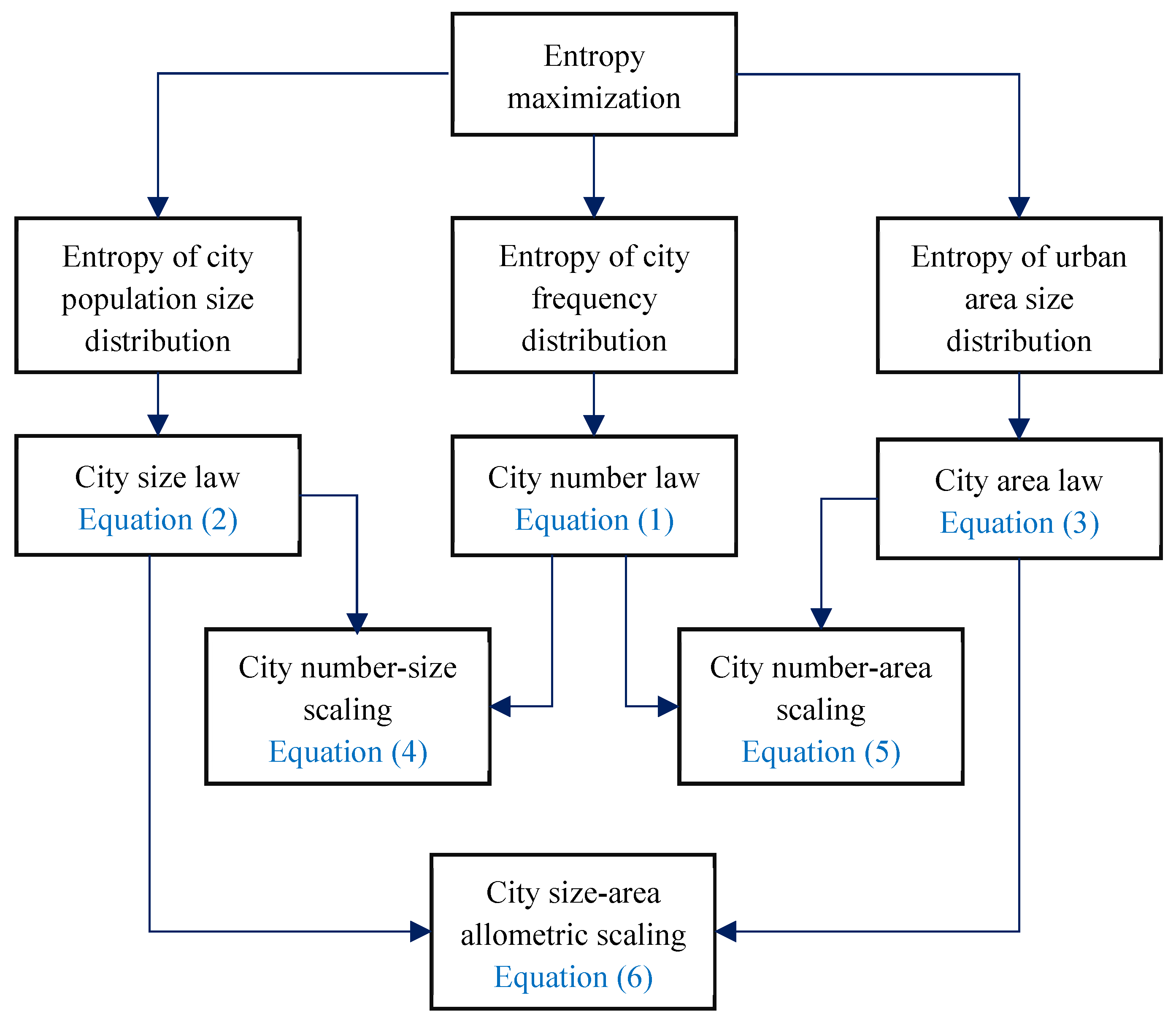 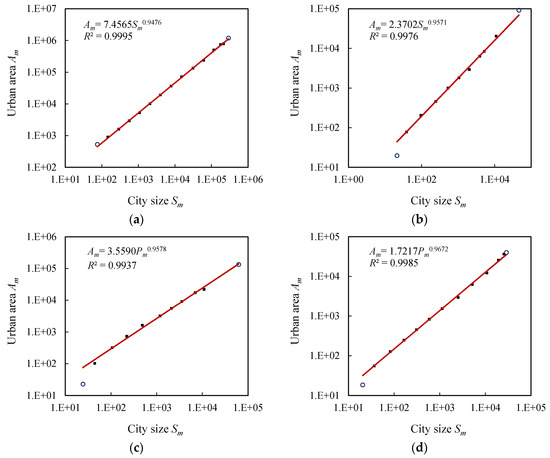 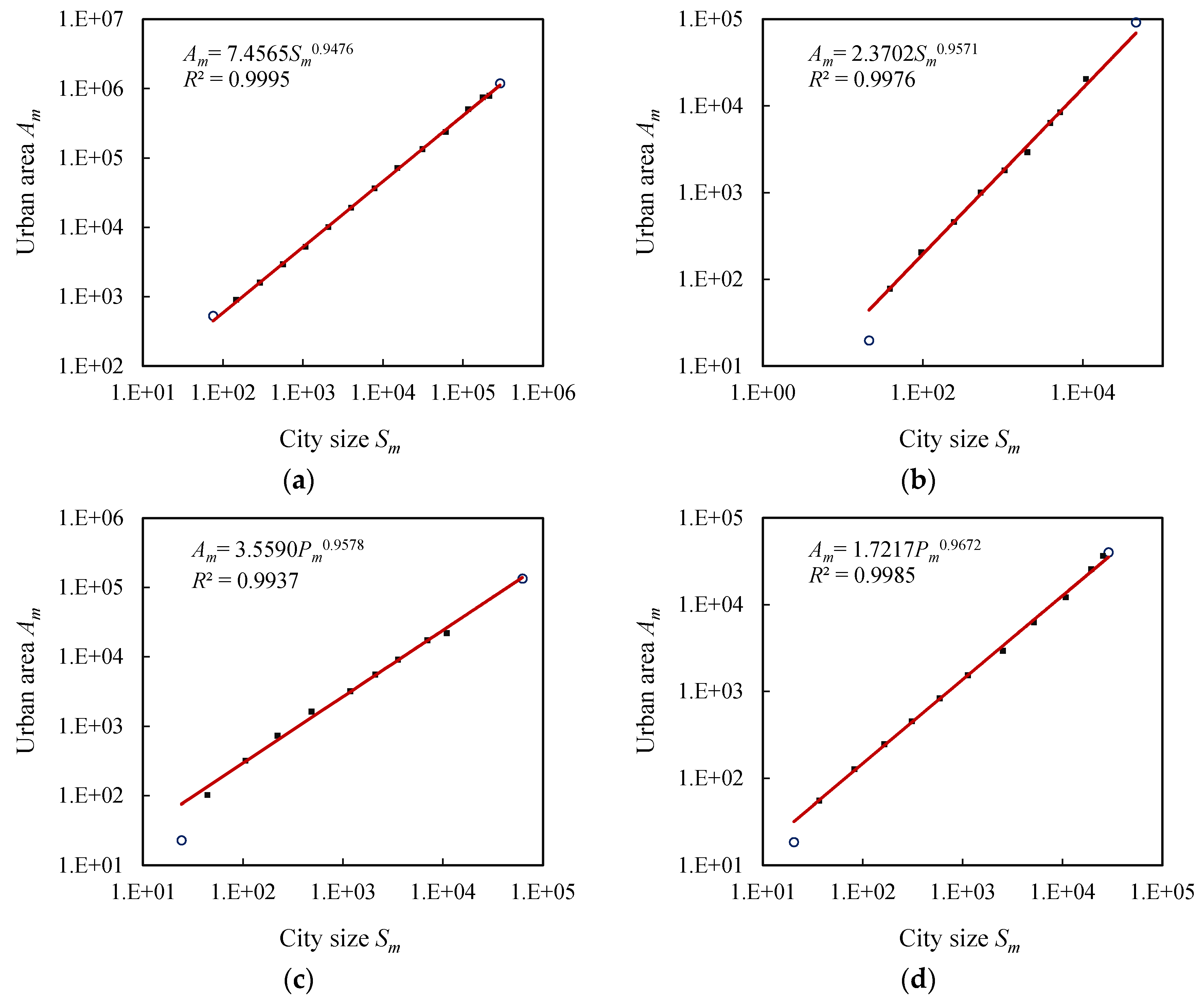