On a Dynamical Approach to Some Prime Number Sequences

We show how the cross-disciplinary transfer of techniques from dynamical systems theory to number theory can be a fruitful avenue for research. We illustrate this idea by exploring from a nonlinear and symbolic dynamics viewpoint certain patterns emerging in some residue sequences generated from the prime number sequence. We show that the sequence formed by the residues of the primes modulo k are maximally chaotic and, while lacking forbidden patterns, unexpectedly display a non-trivial spectrum of Renyi entropies which suggest that every block of size , while admissible, occurs with different probability. This non-uniform distribution of blocks for contrasts Dirichlet’s theorem that guarantees equiprobability for . We then explore in a similar fashion the sequence of prime gap residues. We numerically find that this sequence is again chaotic (positivity of Kolmogorov–Sinai entropy), however chaos is weaker as forbidden patterns emerge for every block of size . We relate the onset of these forbidden patterns with the divisibility properties of integers, and estimate the densities of gap block residues via Hardy–Littlewood k-tuple conjecture. We use this estimation to argue that the amount of admissible blocks is non-uniformly distributed, what supports the fact that the spectrum of Renyi entropies is again non-trivial in this case. We complete our analysis by applying the chaos game to these symbolic sequences, and comparing the Iterated Function System (IFS) attractors found for the experimental sequences with appropriate null models. View Full-Text
Keywords: entropy; symbolic dynamics; prime numbers; gap residues; chaos; fractals; complex systems; nonlinearity entropy; symbolic dynamics; prime numbers; gap residues; chaos; fractals; complex systems; nonlinearity
►▼ Show Figures 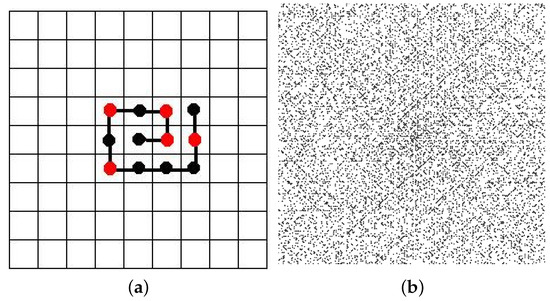