Spatial Heterogeneity in the Occurrence Probability of Rainstorms over China

Detecting the spatial heterogeneity in the potential occurrence probability of water disasters is a foremost and critical issue for the prevention and mitigation of water disasters. However, it is also a challenging task due to the lack of effective approaches. In the article, the entropy index was employed and those daily rainfall data at 520 stations were used to investigate the occurrences of rainstorms in China. Results indicated that the entropy results were mainly determined by statistical characters (mean value and standard deviation) of rainfall data, and can categorically describe the spatial heterogeneity in the occurrence of rainstorms by considering both their occurrence frequencies and magnitudes. Smaller entropy values mean that rainstorm events with bigger magnitudes were more likely to occur. Moreover, the spatial distribution of entropy values kept a good relationship with the hydroclimate conditions, described by the aridity index. In China, rainstorms are more to likely occur in the Pearl River basin, Southeast River basin, lower-reach of the Yangtze River basin, Huai River basin, and southwest corner of China. In summary, the entropy index can be an effective alternative for quantifying the potential occurrence probability of rainstorms. Four thresholds of entropy value were given to distinguish the occurrence frequency of rainstorms as five levels: very high, high, mid, low and very low, which can be a helpful reference for the study of daily rainstorms in other basins and regions. View Full-Text
Keywords: rainstorm; water disasters; spatiotemporal variability; entropy; occurrence probability rainstorm; water disasters; spatiotemporal variability; entropy; occurrence probability
►▼ Show Figures 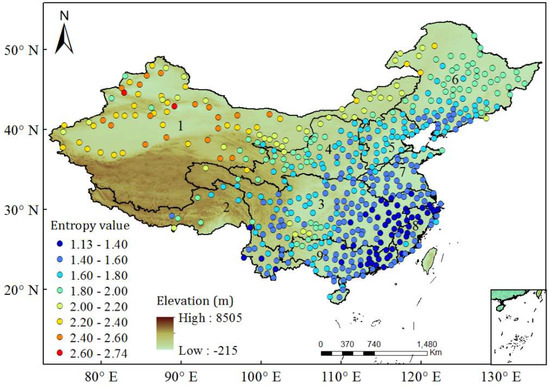