Bearing plays an important role in mechanical equipment, and its remaining useful life (RUL) prediction is an important research topic of mechanical equipment. To accurately predict the RUL of bearing, this paper proposes a data-driven RUL prediction method. First, the statistical method is used to extract the features of the signal, and the root mean square (RMS) is regarded as the main performance degradation index. Second, the correlation coefficient is used to select the statistical characteristics that have high correlation with the RMS. Then, In order to avoid the fluctuation of the statistical feature, the improved Weibull distributions (WD) algorithm is used to fit the fluctuation feature of bearing at different recession stages, which is used as input of Naive Bayes (NB) training stage. During the testing stage, the true fluctuation feature of the bearings are used as the input of NB. After the NB testing, five classes are obtained: health states and four states for bearing degradation. Finally, the exponential smoothing algorithm is used to smooth the five classes, and to predict the RUL of bearing. The experimental results show that the proposed method is effective for RUL prediction of bearing. View Full-Text
Keywords: Naive Bayes; remaining useful life; root mean square Naive Bayes; remaining useful life; root mean square
►▼ Show Figures 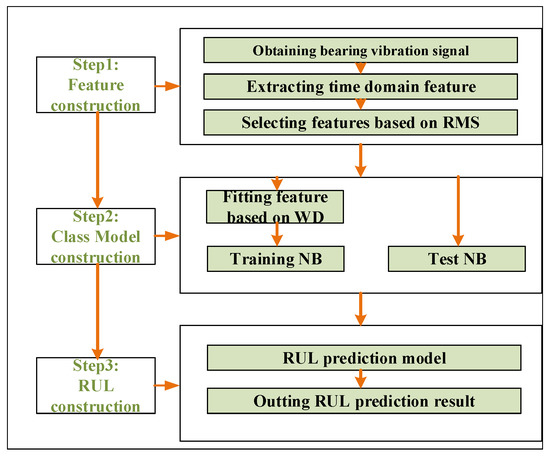