The fields of astronomy and astrophysics are currently engaged in an unprecedented era of discovery as recent missions have revealed thousands of exoplanets orbiting other stars. While the Kepler Space Telescope mission has enabled most of these exoplanets to be detected by identifying transiting events, exoplanets often exhibit additional photometric effects that can be used to improve the characterization of exoplanets. The EXONEST Exoplanetary Explorer is a Bayesian exoplanet inference engine based on nested sampling and originally designed to analyze archived Kepler Space Telescope and CoRoT (Convection Rotation et Transits planétaires) exoplanet mission data. We discuss the EXONEST software package and describe how it accommodates plug-and-play models of exoplanet-associated photometric effects for the purpose of exoplanet detection, characterization and scientific hypothesis testing. The current suite of models allows for both circular and eccentric orbits in conjunction with photometric effects, such as the primary transit and secondary eclipse, reflected light, thermal emissions, ellipsoidal variations, Doppler beaming and superrotation. We discuss our new efforts to expand the capabilities of the software to include more subtle photometric effects involving reflected and refracted light. We discuss the EXONEST inference engine design and introduce our plans to port the current MATLAB-based EXONEST software package over to the next generation Exoplanetary Explorer, which will be a Python-based open source project with the capability to employ third-party plug-and-play models of exoplanet-related photometric effects. View Full-Text
Keywords: astronomy; astrophysics; Bayesian; exoplanets; Kepler; Kepler-76b astronomy; astrophysics; Bayesian; exoplanets; Kepler; Kepler-76b
►▼ Show Figures 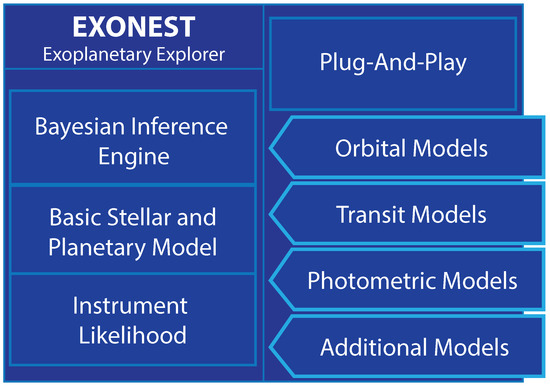