We investigate an intermittent process obtained from the combination of a nonlinear diffusion equation and pauses. We consider the porous media equation with reaction terms related to the rate of switching the particles from the diffusive mode to the resting mode or switching them from the resting to the movement. The results show that in the asymptotic limit of small and long times, the spreading of the system is essentially governed by the diffusive term. The behavior exhibited for intermediate times depends on the rates present in the reaction terms. In this scenario, we show that, in the asymptotic limits, the distributions for this process are given by in terms of power laws which may be related to the q-exponential present in the Tsallis statistics. Furthermore, we also analyze a situation characterized by different diffusive regimes, which emerges when the diffusive term is a mixing of linear and nonlinear terms.
Keywords: anomalous diffusion; nonlinear diffusion equation; Tsallis entropy anomalous diffusion; nonlinear diffusion equation; Tsallis entropy

Nowadays, anomalous diffusion plays an important role in the understanding of several phenomena, e.g., in biology [1,2,3,4], engineering [5,6], and physics [7,8,9]. Among them, we have the transport through the porous media [10,11], dynamic processes in protein folding [12], infiltration [13], single particle tracking [14], electrical response [15,16], and diffusion on fractals [17]. One of the main features present in these contexts is the nonlinear time dependence manifested by the second moment, e.g., (where and are related to subdiffusion and superdiffusion, respectively) usually related to non-Markovian processes. It is also interesting to point out that systems characterized by long tailed distributions, i.e., Lévy distributions [8,9], also exhibit anomalous diffusion.
These situations related to anomalous diffusion have been investigated by taking into account, for example, fractional diffusion equations [18,19,20,21], generalized Langevin equations [22,23], master equations [24,25], random walks [26], and nonlinear diffusion equations [27,28,29,30,31,32,33,34,35,36,37]. It is worth emphasizing that the nonlinear diffusion equations may be related to a thermodynamic [38] characterized by power–law distributions with a compact or a long-tailed behavior, which, in a suitable limit, can be connected with the Lévy distributions. They can also be related with other approaches such as Langevin equations [22,23] and random walks, and have also been analyzed by considering the presence of reaction terms [34]. Towards this, they lead us to an extension of the Fisher equation widely used to model population biology [39] and provide a simple generalization of the Verhulst logistic equation [40]. Thus, the comprehension of the formal aspects present in these approaches are an important point to establish a suitable link between the models and the experimental results. In a sense, our goal is to investigate an intermittent process resulting from the combination of the diffusion (motion) and pauses. For this, we consider the porous media equation with reaction terms related to the rate of switching the particles from the diffusive mode to the resting mode or switching them from the resting to the movement. The results show that, in the asymptotic limit of small and long times, the spreading of the system is essentially governed by a porous media equation. The behavior exhibited for intermediate times depends on the reaction terms related to the motion and pauses. For this process, we also show that, in the asymptotic limits, the distributions can be expressed in terms of power laws, which may be related to the q – exponential present in the Tsallis statistics. This analysis is performed in Section 2. Section 3 includes our discussion and conclusions.

We have analyzed an intermittent process governed by a nonlinear diffusion equation. We have first considered the case with , for which the particles are switched to the motion state to the rest. For this case, we have obtained exact solutions in terms of the q-exponentials of the Tsallis statistics. We have also verified for this case that, depending on the choice of the parameter ν, the solution may exhibit a compact or a long-tailed behavior, which may be connected to a subdiffusion or superdiffusion process. For the case with , which implies in an interchange between two states, motion and rest, we have performed a numerical analysis and verified that, for small and long times, the behavior of is essentially characterized by a diffusive behavior. For intermediate times, i.e., , the reaction terms that characterize the motion and pauses play an important role, and the system exhibits a different diffusive regime from the initial. For , we observe an initial behavior characterized by a fast diffusion and asymptotically governed by a behavior of the diffusive term present in Equation (16). In this case, the distributions are given in terms of q-exponentials and the asymptotic behavior, compact or long-tailed, depending on the value of ν. Furthermore, we have considered a situation characterized by the presence of different regimes, and it showed that the asymptotic regime is faster than the first one exhibited by the system.

The authors are thankful to CNPq (Brazilian agency) for partial financial support.

All the authors have approved the final manuscript. E.K.L., L.R.S., and L.R.E. formulated the problem and performed the analytical calculations and some numerical simulations; H.V.R. and M.K.L. performed part of the numerical calculations, analyzed results and wrote the paper; M.A.F.S. drew the figures, read and checked the whole manuscript. 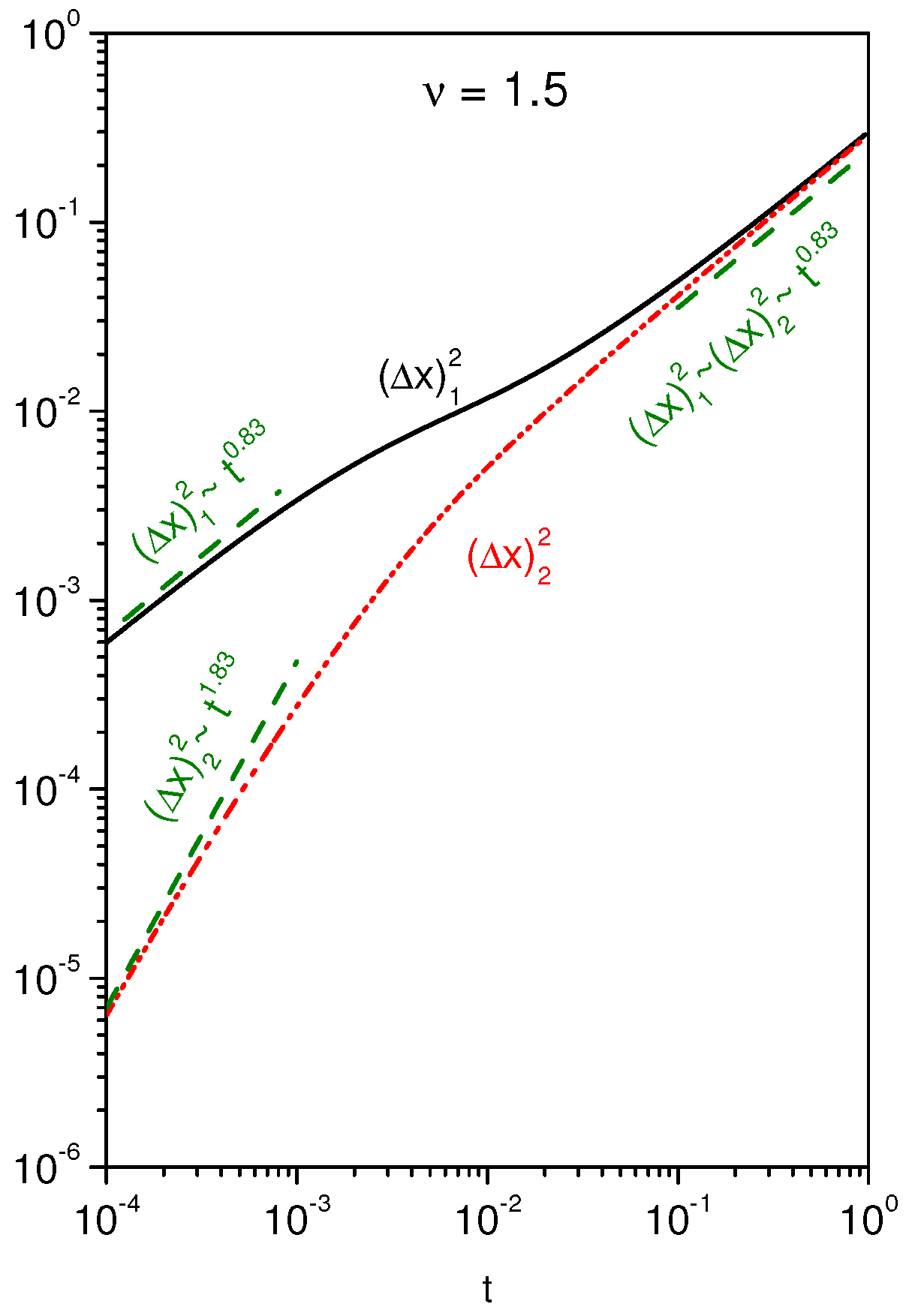 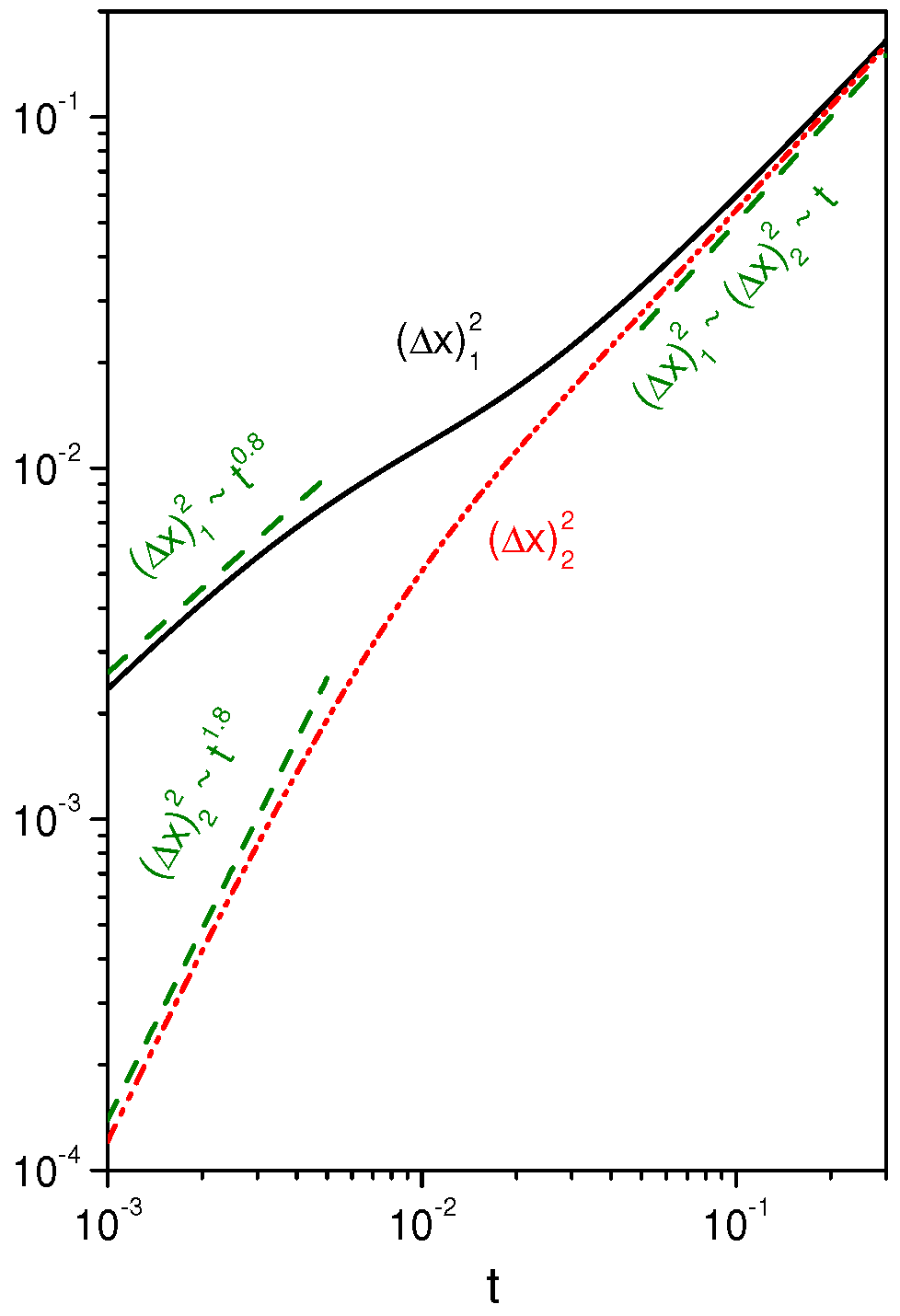 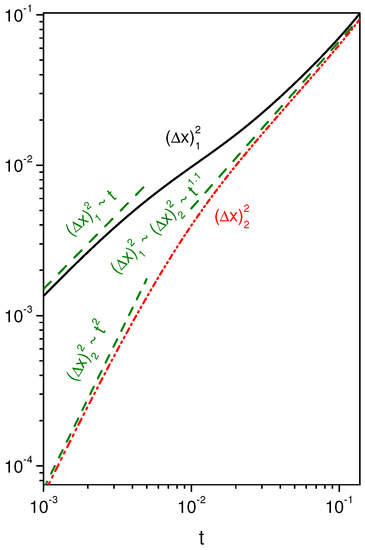 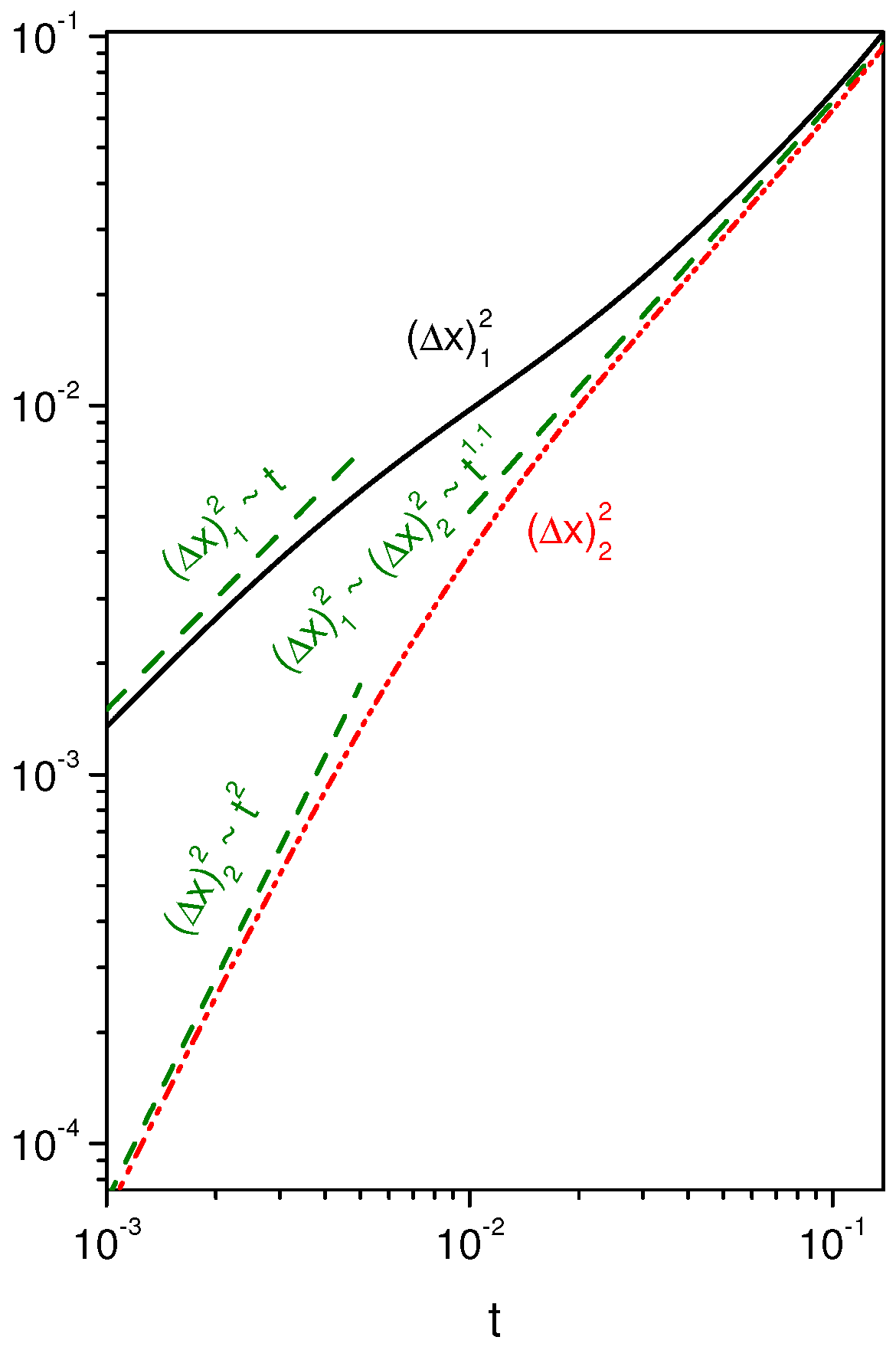