Dynamical Stability and Predictability of Football Players: The Study of One Match

Although fractional calculus is a mathematical topic with more than 300 years of history, its application to physics and engineering has attracted lots of attentions only in the recent years. It has been found that with the help of fractional calculus, many systems in interdisciplinary fields can be described more accurately, such as viscoelastic systems [1], dielectric polarization [2], electrode-electrolyte polarization [3], finance systems and electromagnetic waves [4]. That is to say, fractional calculus provides a superb instrument for the description of the memory and hereditary properties of various materials and processes.

In this paper, the following class of fractional-order chaotic systems are considered :

where 0 < qi < 1, i =1,2,3. X = [x,y,z]T, and x,y,z are pseudo state variables of the system. f(·), g(·), h(·), and ϕ(·) are nonlinear items of the system, each of the four functions is assumed to be continuous and satisfies the Lipschitz condition to guarantee the existence and uniqueness of solutions of initial value problems. α, r are given non-negative constants.

The fractional-order system (1) was introduced by [20], and it should be noted that many chaotic systems can be modeled in this form, such as the Chen, Lorenz, Liu, and Lu systems, etc. Some control techniques have been reported for stabilizing this type of system. For example, Sadras et al. [21] introduced a sliding mode controller to stabilize a special case of system (1). Chen et al. [22] developed a fractional-order sliding surface to guarantee asymptotic stability of the system in the presence of uncertainties. Inspired by [22], Yin et al. [23] provided an adaptive fractional-order sliding mode technique to realize the robust stabilization of this system with unknown bounded uncertainties. It is worth noting that there is a drawback in abovementioned literatures, that is, the stability of the sliding mode dynamics is not researched. Recently, Faieghi et al. [24] firstly applied the fractional Lyapunov stability theory to demonstrate global stability of the sliding mode dynamics. Yuan et al. [25] employed the continuous frequency distributed model of fractional integrator to analyze asymptotic stability of this kind of sliding mode dynamics. However, in [24,25], the nonlinear items of the controlled system were required to be directly eliminated, resulting in a complex controller unsuitable for practical realization. On the other hand, all approaches in the aforementioned works are only focused on the linear and direct application of control inputs. In practice, input nonlinearity is often encountered in various chaotic systems and can be a cause of instability. Thus, it is obvious that the effects of input nonlinearity must be taken into account when analyzing and implementing a control scheme. Recently, Aghababa [26–28] considered the impacts of nonlinear inputs in the stabilization and synchronization of integer-order chaotic systems. However, to the best of our knowledge, there is little information available in the literature about the stabilization of fractional-order chaotic systems with nonlinear inputs.

To sum up, our approach makes the following contributions: (i) it researches the stabilization of a class of fractional-order chaotic systems with unknown bounded model uncertainties and external disturbances; (ii) two kinds of control input nonlinearities including sector and dead-zone nonlinearities are considered; (iii) based on a fractional-order integral type sliding surface, adaptive sliding mode input control and some adaptation laws, a novel sliding mode control scheme is proposed.

The remainder of this paper is organized as follows: in Section 2, the relevant definitions, lemmas and numerical methods for solving the fractional-order differential equations are given. Main results are presented in Section 3. Some numerical simulations are provided in Section 4 to show the effectiveness of the proposed method. Finally, conclusions are put forth in Section 5.

The most frequently used definitions for the general fractional calculus are Riemann-Liouville definition, Caputo definition and Grunwald-Letnikov definition.

where Γ(·) is the Gamma function.

Definition 3. The Caputo fractional derivative definition of order α is described as:

where m is the smallest integer number, larger than α.

Definition 4. The Grunwald-Letnikov fractional derivative definition of order α is written as:

which is equivalent to the Volterra integral equation:

During the process of numerical computation, the trapezoidal quadrature product is used to replace the integral, and the nodes tj(j = 0,1,2, …, n+1) are taken with respect to the weight function (tn+1−·)α−1, that is to say:

where G̃n+1 is the piecewise linear interpolation for G with nodes and knots chosen at tj, j = 0,1, …, n+1. On the basis of quadrature theory, the integral on the right side of Equation (8) can be described as: where:

To calculate the values of and , we should use the predictor formula, the following numerical approximation formula is applied:

Hence, for approximating the Equation (7), the predictor formula is given by:

In this method, the error is:

Thus, with the help of the aforementioned method, we can obtain the numerical solution of a fractional differential equation.

Consider system (1) is perturbed by model uncertainty and external disturbance, and a nonlinear control input is added to the second equation of system (1), then the proposed fractional-order chaotic system can be rewritten as:

where Δg(x,y,z) and d(t) represent the model uncertainty and external disturbance, respectively, u(t) is the single control law to be designed later, and h(u(t)) is a nonlinear function of control input satisfying either Equations (15) or (16). If the nonlinear function h(u(t)) is continuous inside a sector [δ1,δ2], δ1 > 0, i.e.:

The dead-zone nonlinear function is described as follows:

Before introducing our approach, we firstly give an assumption.

Assumption 1. The model uncertainty and external disturbance are assumed to be bounded by:

where θ, ψ are unknown in advance.

Letting θ̂(t) and ψ̂(t) be estimations for θ and ψ, respectively, which are updated by the following adaptive laws:

where ρ1, ρ2 are positive constants, and s is the sliding surface to be designed later.

Generally, the design procedure of an AFSM controller involves two steps. The first step is to establish an appropriate sliding surface with the desired properties. The second step is to design a robust control law to ensure the occurrence of sliding motion. In this paper, we select the following fractional-order integral type sliding surface:

where η is an arbitrary positive constant. Taking time derivative of Equation (20), we get:

When the system (14) operates in the sliding mode, the following equalities are satisfied:

that is, we can get the desired sliding mode dynamics:

Taking the derivative of V1(t) with respect to time, it yields:

Since μi(ω) > 0, α, r are non-negative constants, and η is a positive constant, so according to the analysis results of Reference [34], we have V̇1(t) < 0, which implies that the fractional-order sliding mode dynamics (23) is asymptotically stable. Therefore, the proof is completed.

Theorem 2. Consider the fractional-order chaotic system (14) with unknown bounded uncertainties and sector nonlinear input, then the closed-loop system consisting of uncertain system (14) and controller (27) will converge to the sliding surface s = 0

Taking the time derivative of both sides of Equation (30), one obtains:

Inserting ṡ from Equation (21) into (31), and according to the second state equation of Equation (14), we have:

It is clear that:

One can conclude from Equation (34) that:

Owing to the fact Q(t) > 0, Equation (40) implies that s → 0 as t → ∞. Therefore, the state trajectories of the controlled system (14) can be forced onto the predefined sliding surface. Hence, the proof is completed. On the basis of Theorem 2, if system (14) subject to dead-zone nonlinear input, then we have the following theorem.

Theorem 3. Consider the fractional-order chaotic system (14) with unknown bounded uncertainties and dead-zone nonlinear input. Then the closed-loop system consisting of uncertain system (14) and controller (28) will converge to the sliding surface s = 0

Proof: In a similar way as in the Proof of Theorem 2, we get:

In this section, two illustrative examples are presented to verify the feasibility and effectiveness of the propose control scheme.

Consider an uncertain fractional-order Chen system with sector nonlinear input, which is described by:

where the model uncertainty, external disturbance and sector nonlinear input are given by:

With the above fractional orders and initial conditions, system (45) possesses a chaotic behavior, as shown in Figure 3.

To observe the control effect of AFSM controller, the state trajectories of Equation (45) without control are firstly given in Figure 4.

When the controller is activated at t = 5s, we can obtain the desired time responses of system (45), shown in Figure 5. It is not difficult to see that all state trajectories converge to zero asymptotically, which implies that a class of uncertain fractional-order chaotic systems (14) with sector nonlinear input can be stabilized.

In this simulation, we consider the uncertain fractional-order Liu system with dead-zone nonlinear input, which is written as:

where the model uncertainty, external disturbance and dead-zone nonlinear input are given by:

The chaotic behaviors of system (48) are displayed in Figures 8 and 9.

When the controller is activated at t = 5s, we get the desired state trajectories of (48), shown in Figure 10.

From Figure 10 we can observe that system (48) is stabilized by the proposed sliding mode control approach, and all state trajectories tend to zero asymptotically. Time evolutions of feedback gains ki(t), i = 0,1,2,3 and the estimations θ̂(t), ψ̂(t) are illustrated in Figures 11 and 12, respectively. All these simulation results demonstrate that our method is strongly robust to unknown model uncertainties and external disturbances. Therefore, the proposed approach is effective and feasible.

In this paper, an adaptive fractional-order sliding mode controller is designed to stabilize a class of uncertain fractional-order chaotic systems with nonlinear inputs. The bounds of model uncertainties and external disturbances are assumed to be unknown in advance. Techniques for stabilizing this type of systems are demonstrated in detail. On the basis of the Lyapunov stability theorem, some sufficient conditions are given to guarantee the stabilization. Finally, two simulation examples are presented to verify the effectiveness and robustness of the proposed control scheme. 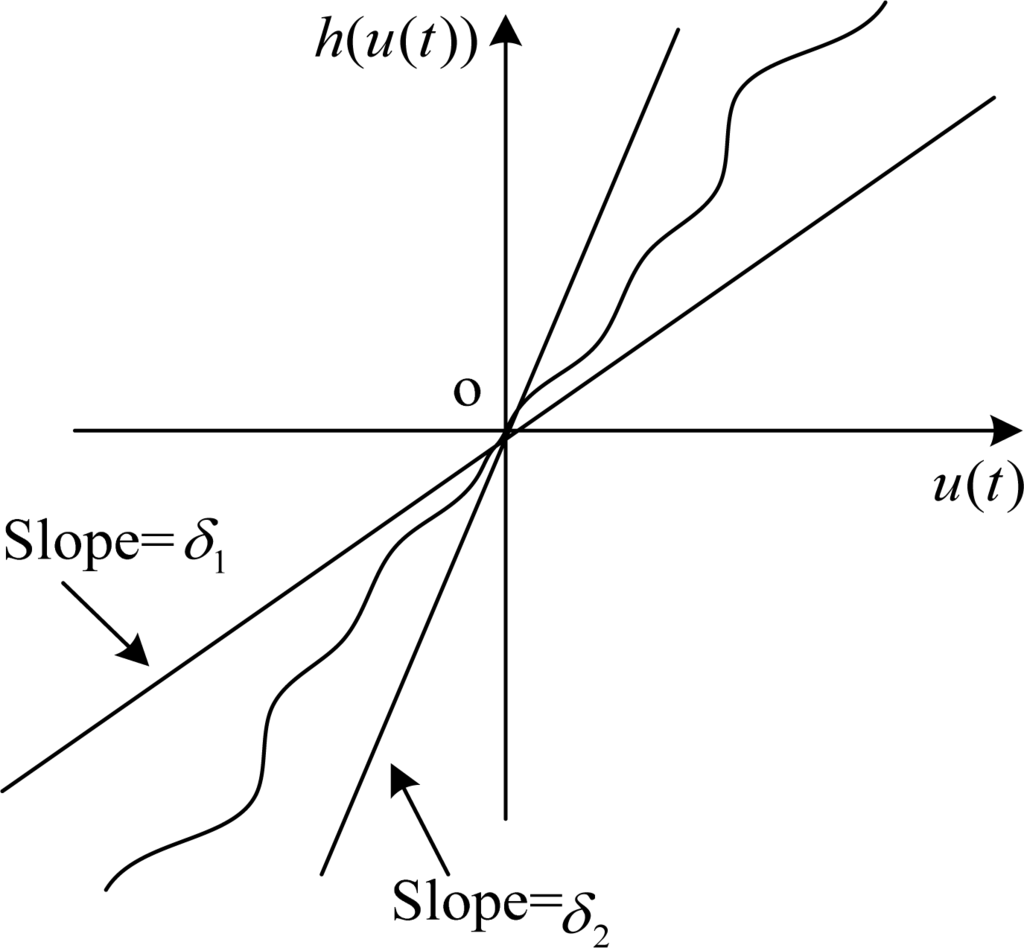 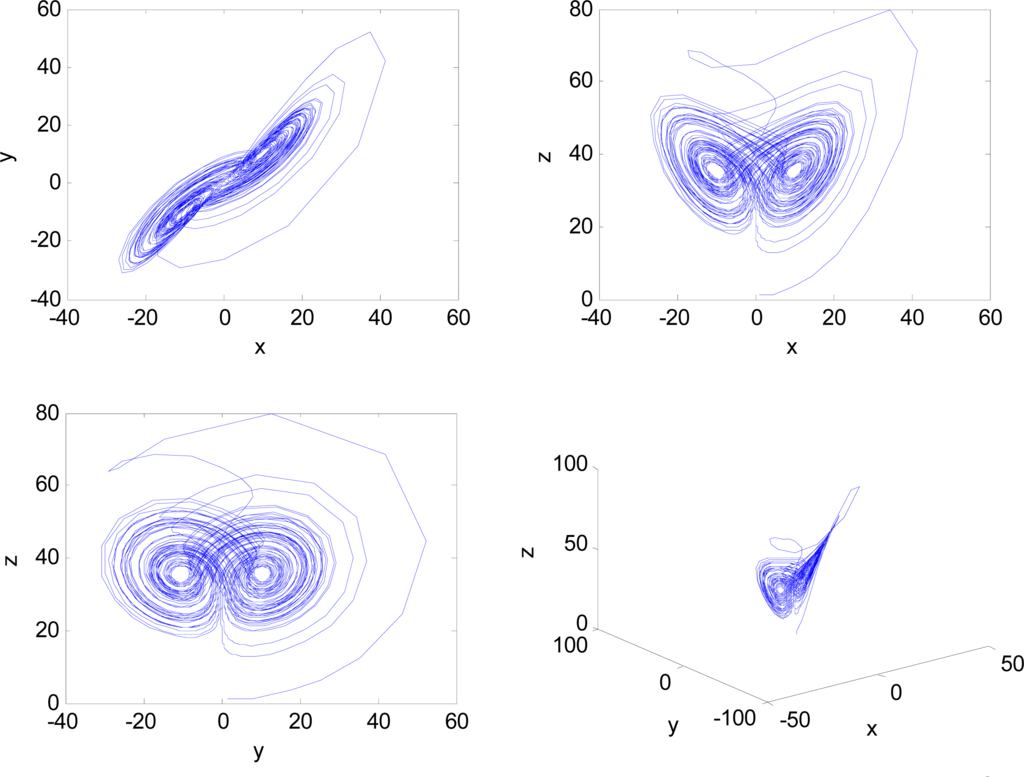 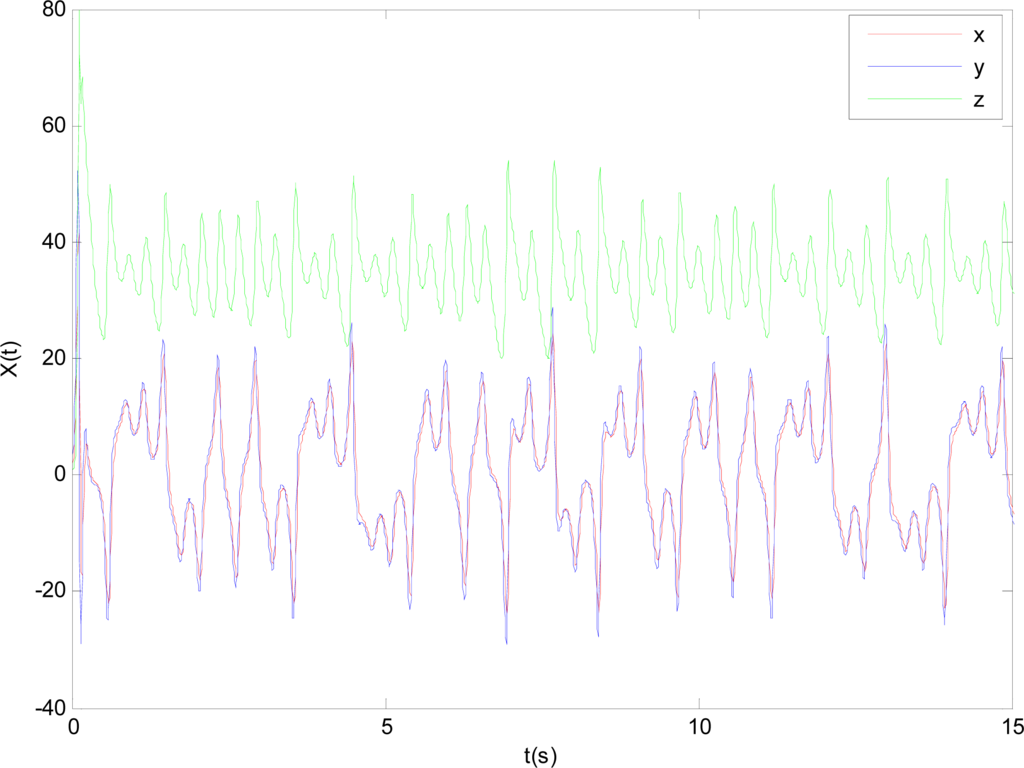 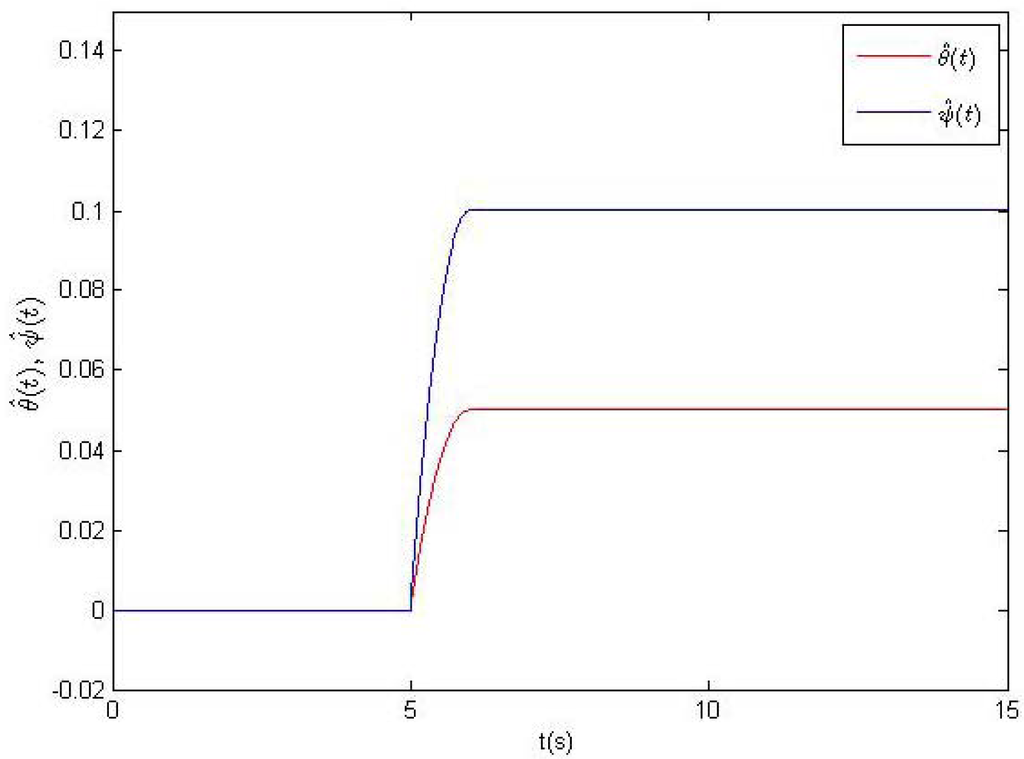 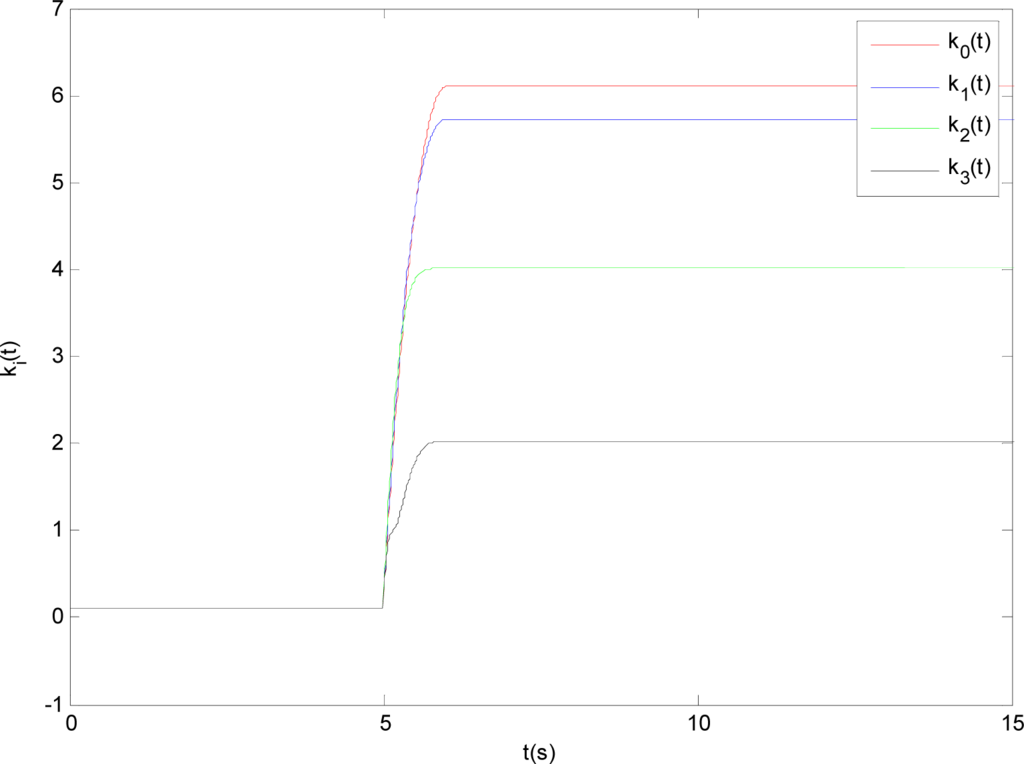