Glyphosate’s Suppression of Cytochrome P450 Enzymes and Amino Acid Biosynthesis by the Gut Microbiome: Pathways to Modern Diseases
Next Article in Special Issue

Thermodynamics of small systems is of contemporary interest, ranging from (bio)molecular and nano-scales to even scales of only a few particles. From the viewpoint of energetics, one of primary issues is to understand how the works are extracted from such systems. Just a little more than a decade ago, a pure-state quantum-mechanical analog of the Carnot engine reversibly operating at vanishing temperatures has been proposed in [1]. It is the smallest engine consisting only of a single quantum particle confined in the one-dimensional infinite square-well potential. It has been shown that the work can be extracted through the controls of the quantum states of the particle and the width of the well in a specific manner. The “efficiency” of the engine has been calculated to be: where () is the value of the system energy fixed along the analog of the isothermal process at high (low) “temperature” of the cycle. (Since this engine operates without finite-temperature heat baths, it should not be confused with quantum heat engines discussed [2,3,4,5,6,7]). It is of physical interest to examine how universal the efficiency of this form is.
To understand the physics behind the mechanism of such a Carnot-like engine, it is useful to note a structural similarity between quantum mechanics and thermodynamics. Let H and be the Hamiltonian and quantum state of the system under consideration, respectively. An analog of the internal energy in thermodynamics is the expectation value of the Hamiltonian: This is in fact the ordinary thermodynamic internal energy in the vanishing-temperature limit, if is chosen to be the ground state. Under changes of both the Hamiltonian and the state along a certain “process”, it varies as . This has a formal analogy with the first law of thermodynamics [8]: where and are identified with the analogs of the changes of the quantity of heat, , and the work, , respectively. H depends on the system volume, V, which changes in time very slowly in an equilibrium-thermodynamics-like situation. More precisely, the time scale of the change of V is much larger than that of the dynamical one, . Then, in the adiabatic approximation [9], the instantaneous Schrödinger equation, , holds, provided that the energy eigenvalues naturally satisfy the inequality for . Assuming that forms a complete orthonormal system, an arbitrary state is expanded as , where the expansion coefficients satisfy the normalization condition, . Accordingly, the adiabatic scheme allows us to write: It has been shown in [8] that imposition of the Clausius equality on the Shannon entropy (not the von Neumann entropy) and the quantity of heat makes pure-state quantum mechanics transmute into equilibrium thermodynamics at finite temperature.
Here, the following question is posed. An analog of the working material in thermodynamics is the shape of the potential that confines a particle. Then, is the efficiency in Equation (1) universal independently of the potential?
In this paper, we answer this question by generalizing the quantum-mechanical Carnot-like engine with the one-dimensional infinite square-well potential to the case of an arbitrary confining potential. We present the most general formula for the efficiency. In marked contrast to the genuine thermodynamic Carnot engine, the efficiency of the quantum-mechanical Carnot engine depends generically on the shape of a potential as the analog of the working material, implying that the engine is not universal. This non-universality is due to the absence of an analog of the second law of thermodynamics in pure-state quantum mechanics, where the von Neumann entropy identically vanishes. We also identify a class of spectra that yields the efficiency of the form in Equation (1).

2. Derivation of the General Formula for the Efficiency

Consider a cycle depicted in Figure 1, which consists of four processes. 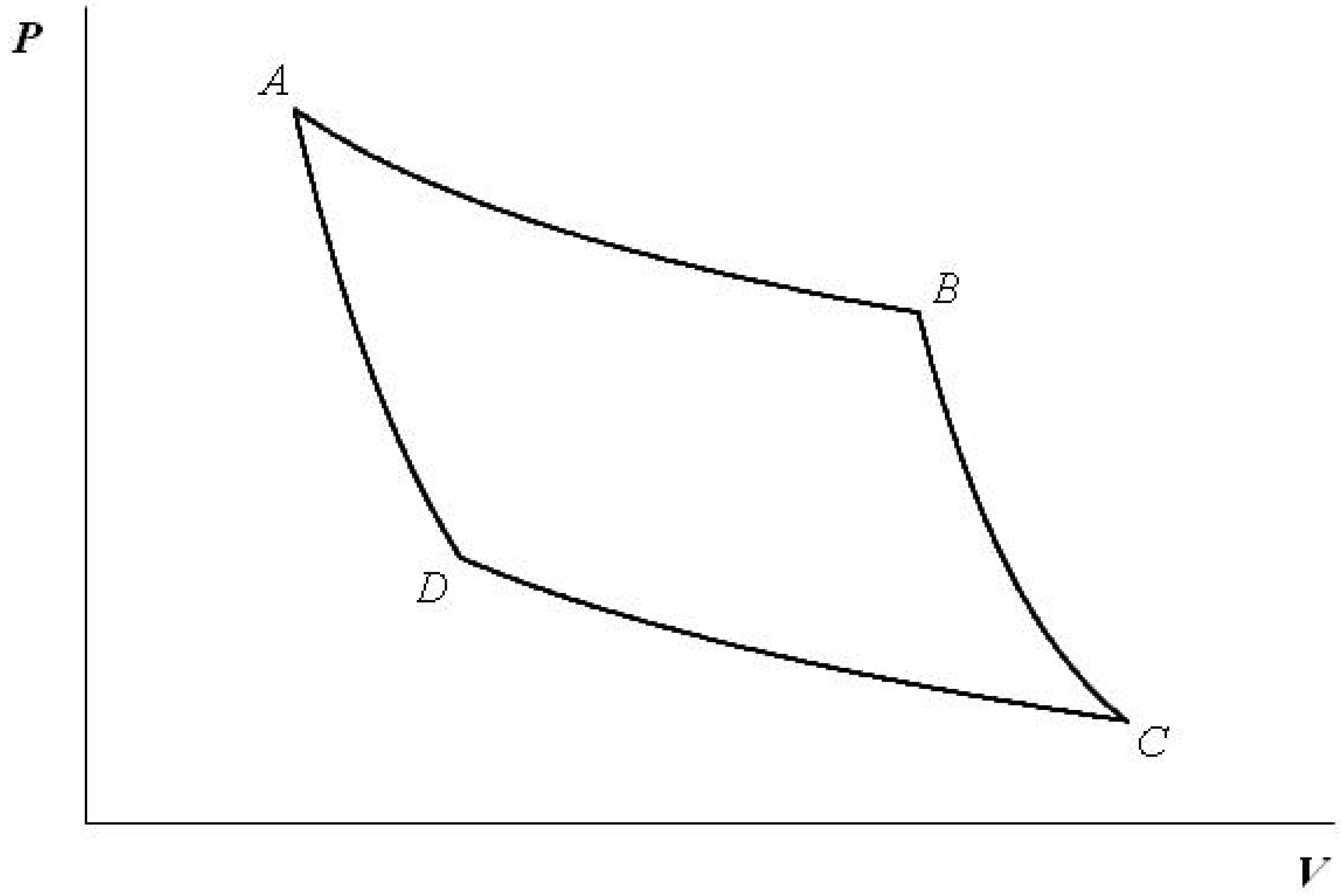 3. Potential Dependence of the Efficiency: Examples

Let us evaluate the efficiency in Equation (20) for several examples.
Firstly, we reexamine the infinite square-well potential in one dimension discussed in [1]. The energy eigenvalues are given by (), where m and L are the mass of the particle confined in the potential and the slowly varying width of the well, respectively. The volume, V, corresponds to the width, L, in one dimension. Accordingly, the pressure corresponds to the force. Take the energies of the ground and first excited states, and . From Equations (9) and (16), where V should be replaced by L, we have that , , , and . Equation (20) can immediately be evaluated for this system to yield Equation (1). In terms of the values of the width, the efficiency is given by . These are precisely the results for the quantum-mechanical Carnot-like engine obtained earlier in [1]. We would like to mention the following recent studies. In [10], a discussion about a finite-time process has been developed, and the value of this efficiency is rigorously determined in the case when the power output is maximum. In [11], it has been shown how superposition of quantum states can enhance the efficiency of this engine.
Next, let us consider a particle with mass m confined in the one-dimensional harmonic oscillator potential, , where k is a positive factor that can vary slowly. At the value, the width of the potential is , and thus the frequency depends on L as . The energy eigenvalues are (). Take the energies of the ground and first excited states, and . It follows from Equations (9) and (16) that , , , and . Therefore, again, Equation (20) is reduced to Equation (1). In terms of the values of the width, the efficiency is given by .
Now, let us examine a class of energy spectra. Suppose that the energy eigenvalues have the form [12]: where and ’s are independent of V, and, in particular, is positive and ’s satisfy . A class of spectra of this form is referred to here as homogeneous type. Take the first two states, for example. Then, Equations (9) and (16) lead to , , , and . Consequently, Equation (20) is calculated to result in Equation (1). In other words, the efficiency of the form in Equation (1) is “universal” within the class of homogeneous-type spectra. In terms of the values of the volume, the efficiency is given by . In view of this, the above-mentioned examples of the infinite square well and harmonic oscillator, both of which are of the homogeneous type, simply correspond to and (with V being replaced by L), respectively.
Finally, we discuss the Morse potential in three dimensions. It reads , where D, , and are positive factors, and r is the radial part of the spherical coordinate. This potential has the minimum, , at . The potential width, R, at the value ( ) is , where . In the case of the vanishing angular-momentum states (i.e., the s states), the energy eigenvalues of the bound states are given as follows [13]: , where , which is not a homogeneous type in Equation (21) with V being replaced by R. Let us take the energies of the ground and first excited states: and , where and , respectively. R varies as in Figure 1 (with V being replaced by R). The system is “breathing”. Equations (9) and (16) lead to and . The efficiency is found to be , where and . Clearly, this does not have the form in Equation (1).

We have derived the most general formula for the efficiency of the pure-state quantum-mechanical Carnot-like engine reversibly operating at vanishing temperatures. We have shown how the efficiency depends on the shape of a potential as the analog of the working material in thermodynamics. Thus, this engine is generically not universal, in contrast to the genuine thermodynamic Carnot engine. This nonuniversality is due to the absence of an analog of the second law of thermodynamics in pure-state quantum mechanics, in which the von Neumann entropy identically vanishes. We have also identified a class of spectra of the homogeneous type, which has the efficiency of the common form in Equation (1).

This work was supported in part by a Grant-in-Aid for Scientific Research from the Japan Society for the Promotion of Science.