From Random Motion of Hamiltonian Systems to Boltzmann’s H Theorem and Second Law of Thermodynamics: a Pathway by Path Probability
Previous Article in Journal

The κ-Generalizations of Stirling Approximation and Multinominal Coefficients

Ecosystem dynamics provides an interesting arena for the application of a plethora concepts and techniques from statistical mechanics. Here I review three examples corresponding each one to an important problem in ecology. First, I start with an analytical derivation of clumpy patterns for species relative abundances (SRA) empirically observed in several ecological communities involving a high number n of species, a phenomenon which have puzzled ecologists for decades. An interesting point is that this derivation uses results obtained from a statistical mechanics model for ferromagnets. Second, going beyond the mean field approximation, I study the spatial version of a popular ecological model involving just one species representing vegetation. The goal is to address the phenomena of catastrophic shifts—gradual cumulative variations in some control parameter that suddenly lead to an abrupt change in the system—illustrating it by means of the process of desertification of arid lands. The focus is on the aggregation processes and the effects of diffusion that combined lead to the formation of non trivial spatial vegetation patterns. It is shown that different quantities—like the variance, the two-point correlation function and the patchiness—may serve as early warnings for the desertification of arid lands. Remarkably, in the onset of a desertification transition the distribution of vegetation patches exhibits scale invariance typical of many physical systems in the vicinity a phase transition. I comment on similarities of and differences between these catastrophic shifts and paradigmatic thermodynamic phase transitions like the liquid-vapor change of state for a fluid. Third, I analyze the case of many species interacting in space. I choose tropical forests, which are mega-diverse ecosystems that exhibit remarkable dynamics. Therefore these ecosystems represent a research paradigm both for studies of complex systems dynamics as well as to unveil the mechanisms responsible for the assembly of species-rich communities. The more classical equilibrium approaches are compared versus non-equilibrium ones and in particular I discuss a recently introduced cellular automaton model in which species compete both locally in physical space and along a niche axis. View Full-Text
Keywords: nonlinear dynamics; cellular automata; Lotka-Volterra competition model; bifurcations in ecosystems nonlinear dynamics; cellular automata; Lotka-Volterra competition model; bifurcations in ecosystems
►▼ Show Figures 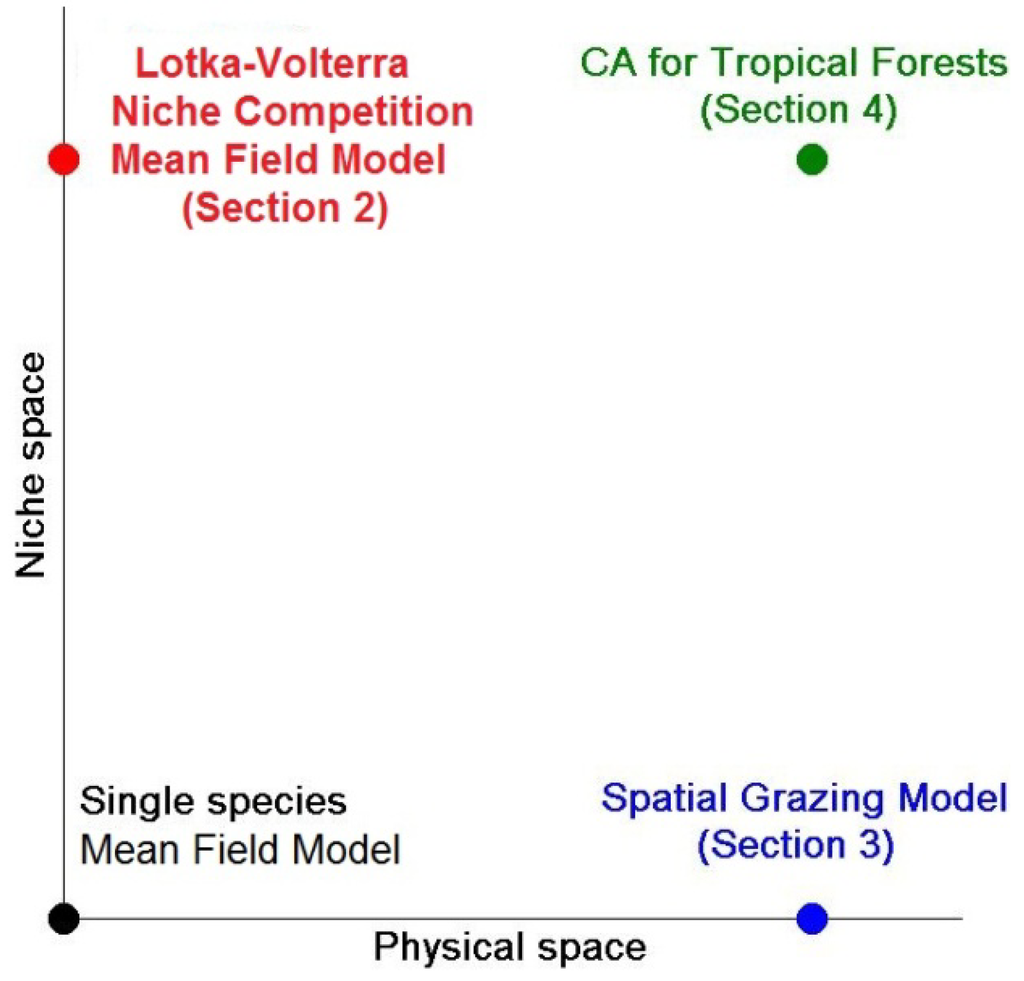