A Statistical Thermodynamical Interpretation of Metabolism
Next Article in Special Issue

Functional Information: Towards Synthesis of Biosemiotics and Cybernetics

Cybersemiotics: An Evolutionary World View Going Beyond Entropy and Information into the Question of Meaning

What makes Cybersemiotics different from other approaches attempting to produce a transdisciplinary theory of information, cognition and communication is its absolute naturalism, which forces us to view life, consciousness and cultural meaning all as a part of nature and evolution. It thus opposes a number of orthodoxies: 1. The physico-chemical scientific paradigm based on third person objective empirical knowledge and mathematical theory, but with no conceptions of experiental life, meaning and first person embodied consciousness and therefore meaningful linguistic intersubjectivity; 2. The biological and natural historical science approach understood as the combination of genetic evolutionary theory with an ecological and thermodynamic view based on the evolution of experiental living systems as the ground fact and engaged in a search for empirical truth, yet doing so without a theory of meaning and first person embodied consciousness and thereby linguistic meaningful intersubjectivity; 3. The linguistic-cultural-social structuralist constructivism that sees all knowledge as constructions of meaning produced by the intersubjective web of language, cultural mentality and power, but with no concept of empirical truth, life, evolution, ecology and a very weak concept of subjective embodied first person consciousness even while taking conscious intersubjective communication and knowledge processes as the basic fact to study (the linguistic turn); 4. Any approach which takes the qualitative distinction between subject and object as the ground fact, on which all meaningful knowledge is based, considering all result of the sciences including linguistics and embodiment of consciousness as secondary knowledge, as opposed to a phenomenological (Husserl) or actually phaneroscopic (Peirce) first person point of view considering conscious meaningful experiences in advance of the subject/object distinction. The phaneroscopic semiotics includes an intersubjective base as Peirce considers all knowledge as intersubjectively produced through signs and view emotions and qualia as Firstness. The integrative transdisciplinary synthesis of Cybersemiotics starts by accepting two major, but not fully explanatory, and very different transdisciplinary paradigms: 1. The second order cybernetic and autopoietic approach united in Luhmann’s triple autopoietic system theory of social communication; 2. The Peircean phaneroscopic, triadic, pragmaticistic, evolutionary, semiotic approach to meaning, which has led to modern biosemiotics, based in a phenomenological intersubjective world of partly self-organizing triadic sign processes in an experiental meaningful world. The two are integrated by inserting the modern development of information theory and self-organizing emergent chemico-biological phenomena as an aspect of a general semiotic evolution in the Peircean framework. This creates the Cybersemiotic framework, where evolutionary experiental and intersubjective sign processes become the ground reality, on which our conceptions of ourselves, action, meaning and the word are built. None of the results from exact science, biology, humanities or social sciences are considered more fundamental than the others. They contribute on an equal footing to our intersubjective semiotics knowing process of ourselves and the world View Full-Text
Keywords: cybersemiotics; semiotics; informationalism; absolute naturalism; phenomenology; phaneroscopy; autopoiesis; computationalism; intentional sciences; cenoscopic science; transdisciplinarity cybersemiotics; semiotics; informationalism; absolute naturalism; phenomenology; phaneroscopy; autopoiesis; computationalism; intentional sciences; cenoscopic science; transdisciplinarity
►▼ Show Figures 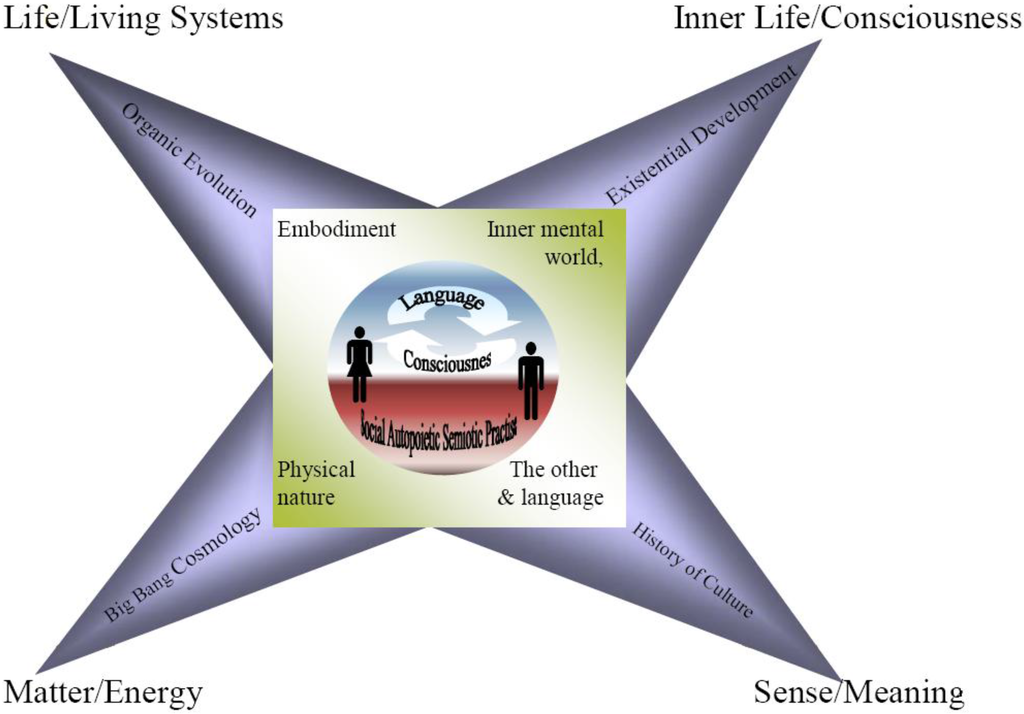