Microbiota of the Tongue and Systemic Connections: The Examination of the Tongue as an Integrated Approach in Oral Medicine
Previous Article in Journal

Welcome to the New Journal—Hygiene

Listeria monocytogenes is a food-borne bacterium that give rise to the potentially life-threatening disease listeriosis. Listeriosis has been mandatorily notifiable in Norway since 1991. All clinical L. monocytogenes isolates are sent to the Norwegian Institute of Public Health (NIPH) for typing. Since 2005 Multi-Locus Variable number tandem repeats Analysis (MLVA) has been used for typing but was recently replaced by whole genome sequencing using core genome Multi-Locus Sequence Typing (cgMLST). In the present study, L. monocytogenes isolates collected at salmon processing plants in Norway in 2007 (n = 12) and 2015 (n = 14) were first subject to MLVA. Twelve clinical L. monocytogenes isolates with matching MLVA profile and sampling time were selected from the strain collection at NIPH. Twenty-one isolates from the salmon processing plants and all clinical isolates (n = 12) were whole genome sequenced and compared using cgMLST and in silico detection of virulence genes. cgMLST revealed four pairs of environmental–human isolates with ≤10 allelic differences over 1708 genes, indicating that they may be assigned as clonal, with the implication that they are descended from the same recent ancestor. No relevant difference in carriage of virulence genes was found between environmental or human isolates. The present study shows that L. monocytogenes strains that genetically resemble contemporary isolates from human listeriosis circulate in Norwegian salmon slaughterhouses, and carry the same virulence genes. View Full-Text
Keywords: food-borne zoonoses; food safety; infectious disease; Listeria; public health; salmon; whole genome sequencing food-borne zoonoses; food safety; infectious disease; Listeria; public health; salmon; whole genome sequencing
►▼ Show Figures 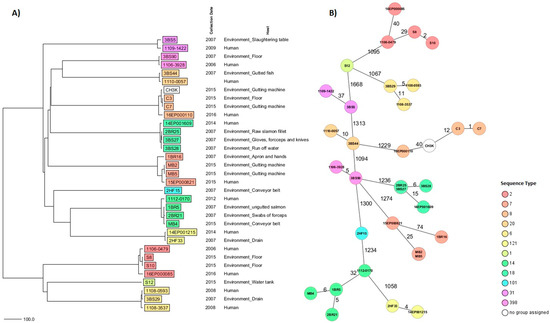