From a global perspective, dams are constructed to trap water flowing from a higher concentration to a lower concentration into a basin for several purposes to aid humanity. The continuous monitoring of dams is prudent for measuring the rate of sedimentation and siltation, and to ensure that it functions to its full capacity. The Tagwai dam is used for irrigation and domestic activities. It was observed that there is a shortage in its storage capacity and supplies due to sedimentation, and coupled with this is the fact that the majority of the communities are not connected to the tap water system; if not, the problem would have been evidently pronounced. However, to determine the present volume of water and provide possible ways of increasing the reservoir’s storage capacity, the leapfrogging approach was used to improve the basin. The data were collected using a single beam echosounder and Hi-Target V30 differential global positioning system (DGPS). The sounder was used to acquire bathymetric data, while the DGPS was used to delineate the shoreline. The data were interpolated using the ordinary Kriging technique. After that, the leapfrogging method was grouped into four scenarios: Scenario A, B, C, and D. In each stage, the volume was computed using Simpson’s 3/8 integrated model. Scenario A is the present stage of the reservoir. Consequently, the results show that, while scenario B and C presented an appreciable increase in volume at the instant, scenario D illustrated a tremendous improvement in the storage capacity, and it is a win-win situation. The decision on which leapfrogging approach to employ depends on the government’s willingness to enhance the reservoir’s capacity and the resources available, such as human and financial capital to execute the project. View Full-Text
Keywords: leapfrogging; scenario; bathymetric data; Kriging interpolation; volume enhancement leapfrogging; scenario; bathymetric data; Kriging interpolation; volume enhancement
►▼ Show Figures 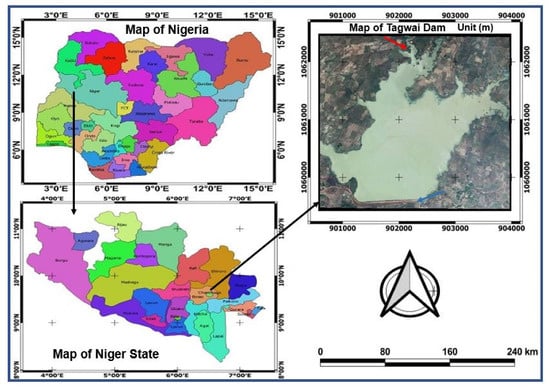