The Trouble with Anthropocentric Hubris, with Examples from Conservation

Avocado cultivation has reduced the extent of forest ecosystems in central Mexico, even in natural protected areas such as the Monarch Butterfly Biosphere Reserve (MBBR) where information on the extent and expansion dynamics of avocado cover is scant. This study aimed to identify avocado plantations within the MBBR through photo interpretation for the 2006–2018 period. Change rates of the avocado cover extent were calculated for the northern, central, and southern zones of the MBBR, and topographic attributes such as elevation, soil type, slope, and slope aspect were identified. A total extent of 958 ha is covered by avocado plantations within the MBBR. The southern zone hosted the largest area under avocado cultivation (570 ha), but the northern zone had the highest change rate between 2006 and 2018 (422%). Most avocado orchards have been established mainly in Acrisol soils, south-facing slopes, on steep hillsides, and in elevations between 2050 and 2800 m. The conversion from traditional agricultural lands has been the main mechanism for the establishment of avocado orchards. However, 40 ha under avocado cultivation derived from deforestation, mainly in the central zone. The expansion of avocado plantations could trigger environmental impacts, even threatening the overwintering habitat and the migratory phenomenon of the monarch butterflies.
Keywords: biological conservation; land-use change; Michoacán; natural protected area biological conservation; land-use change; Michoacán; natural protected area

Land-use change has been a relevant source of environmental degradation worldwide, a process strongly correlated with the expansion of pasture and agricultural lands, urban areas, and mining [1]. Land-use change reduces biodiversity [2], modifies the physicochemical properties of soils [3], alters hydrology [4], and increases greenhouse gas emissions [5]. The global expansion of new markets and the consumption of high-demand products, such as oil palm and soybean, have promoted land-use changes in southeastern Asia and Latin America, where these crops have been established on a massive scale in export-oriented intensive plantations [6,7].
During the last two decades, the consumption of avocados (Persea americana Mill.) has increased worldwide due to its known nutritional properties, as well as its potential medicinal and industrial applications [8]. Mexico is the major avocado producer in the world and supplies 66% of the global demand [9]. The state of Michoacán, located in central Mexico, provides 80% of the national production on a surface of approximately 170,000 ha [10]. Massive avocado plantations have been established in western and central Michoacán in a region known as the “Avocado strip”, characterized by temperate climate and volcanic soils rich in organic matter, and is covered mainly by pine-oak forests [11]. These agro-climatic conditions allow four annual yields of avocados, producing up to 25 Mg ha−1 [12].
Due to the economic success of the Mexican avocado, governmental policies have prioritized an increase in production through incentives and credits, food safety programs, and support for producers to gain access to international markets [13]. At a regional level, the expansion of avocado cultivation has contributed to the reduction of poverty, social margination, and emigration indices [14]. The Mexican government intends to increase production volume up to 67% by 2030 [15], which necessarily implies the opening of new areas for avocado cultivation.
However, the expansion of the “green gold” has triggered the loss of 33% of the oak-pine forest in the Avocado strip of Michoacán, equivalent to 146,700 ha between 1990 and 2006 [16]. During that period, the land-use change rates for the establishment of avocado orchards reached 690 ha yr−1 [17]. A large number of avocado orchards have been established illegally, in which forest fires have been intentionally induced as a way to justify the recovery of burned areas through avocado cultivation [13,18]. The expansion of avocado cover has affected mainly oak and pine forests, whose natural distribution coincides with the optimal areas for the growth of avocado plantations [19,20].
Avocado orchard expansion has reached the region near the Monarch Butterfly Biosphere Reserve during the last 25 years. This natural protected area is located in the Mexican States of Michoacán and Mexico, where the monarch butterflies (Danaus plexippus Lindley) overwinter each year in montane conifer forests [21]. Avocado cultivation in the region began in 1995 when some municipalities of western and central Michoacán obtained the phytosanitary certification to export avocado to the United States, which encouraged many farmers in the state to replace their traditional crops, such as maize and bean, with avocado orchards [14], particularly after the implementation of the North American Free Trade Agreement (NAFTA) in 1994. It caused the reduction of the market price of these traditional crops and, at the same time, enhanced the exportation of avocado from Mexico and its consumption in the United States [22].
In 2018, the municipalities of Zitácuaro, Ocampo, and Angangueo, where part of the MBBR is located, obtained a phytosanitary certification for exportation [23]. Therefore, it is predictable that a substantial increase in avocado cultivation will ensue. Field-based observations suggest that avocado orchards have been established within the boundaries of the MBBR, mainly in low-elevation hillsides. However, little is known on the total extent covered by avocado orchards, as well as the spatiotemporal dynamics of their establishment and the topographic conditions on which avocado plantations grow.
Interpretation of satellite imagery is a common source for the detection, quantification, and mapping of land-use changes at a high spatial resolution [24]. Hence, this study aimed to (a) identify and estimate the area under avocado cultivation in the MBBR, (b) to assess the dynamics of avocado orchards expansion between 2006 and 2018, and (c) to identify topographic conditions such as elevation, soil type, slope, and slope aspect, on which avocado orchards are located.

The MBBR is located in the boundaries of the states of Mexico and Michoacán in central Mexico, between the coordinates 19.3088° N, −100.1519° W and 19.7408° N, −100.3738° W. This natural protected area belongs to the Trans-Mexican Volcanic Belt and is formed by three montane ranges: Sierra Chincua in the northern zone, Sierra Campanario-Chivati-Huacal in the central zone, and Sierra Cerro Pelón in the southern zone. In addition, there is an external portion called “Cerro Altamirano”, located northeast from the main polygon, between the coordinates 19.9914° N, −100.1661° W and 19.9515° N, −100.1114° W [25] (Figure 1).
The orography of the MBBR is rugged, shaped by volcanic cones and montane plains in elevations between 2200 and 3640 m [26]. The climate is temperate subhumid in the southern zone and semi-cold subhumid in the central and northern zones. Mean annual temperature ranges, according to the zone, between 8 and 22 °C, and mean annual precipitation between 700 and 1250 mm, with rains from July to October [27]. Conifer forests are the most representative vegetation type and are dominated by sacred fir (Abies religiosa Schlecht et Cham) forests in elevations between 3150 and 3300 m, mixed-conifer forests co-dominated by A. religiosa and Pinus pseudostrobus Lindley (smooth-bark Mexican pine) between 2850 and 3150 m, and P. pseudostrobus forests below 2850 m [28]. Other vegetation types with less extent are oak forests, tropical montane cloud forests, and montane grasslands [29].
The MBBR was decreed in 1986, initially covering 16,110 ha of sacred fir forests in polygons surrounding the monarch butterfly colonies located at the highest mountain peaks, but a subsequent decree in 2000 increased the total extent to 56,256 ha, extending the polygon to lower elevations covered by mixed-conifer and pine forests, and dividing the main polygon into core and buffer zones [30]. In the core zones, productive activities such as commercial logging are not allowed. In the buffer zone, several productive activities are permitted under environmental restrictions such as commercial logging, firewood collection, mining, livestock grazing, and agriculture [25].
The land is owned by 59 ejidos, 13 indigenous communities, and a federal property [30]. The ejidos and indigenous communities have a social land property, in which management decisions are reached in assemblies [31]. Approximately 27,000 people inhabit the MBBR polygon, mainly in small rural settlements [32]. During the last two decades, illegal logging has affected sacred fir and mixed conifer forests in the core zone [33], whereas forest fires are common disturbances throughout the reserve, associated with logging, agricultural burns, and campfires [34].

Landsat imagery from the years 2006, 2009, 2012, 2015, and 2018 of the MBBR main polygon was obtained from Google Earth Pro version 7.3.2 [35]. For each year, the fragments covered by avocado plantations within the MBBR were delimited through photo interpretation at a scale of 1:10,000, identifying avocado orchards according to the texture of the image shown in Figure 2. Avocado orchards were distinguished from forest plantations due to the spacing, which is usually 6 m in the former and 3 m in the latter [36].
Photo interpretation was validated through ground-truthing of 30 georeferenced points distributed randomly over fragments classified as “avocado orchards” along the MBBR. Analysis of area under the curve (AUC) and a partial-ROC (Receiver Operator Classification) were carried out by using 50% of field-verification points as validation data, bootstrapping of 1000 replications, and an omission error less than 5%, in the Nichetoolbox [37]. Values of AUC > 0.7 and partial-ROC close to two indicate map models with a high predictive capacity [38,39]. A Z-analysis was made to evaluate whether the values of the partial-ROC differed from random, in the R software version 3.4.3 [40]. The extent of the avocado cover was estimated for each study period and zone. From the shape of the avocado cover of 2018, the elevation, soil type, slope, and slope aspect were identified. The proportion of avocado cover derived from agricultural lands or deforestation was also estimated.

The land-use change rate was estimated through the following equation developed by FAO [41]: where:

The cultivation of avocados has shown sustained growth since 2006, reaching a current total extent of 958 ha in the buffer zone, particularly in the southern zone of the MBBR, which includes 60% of the avocado cover. Our data also suggest an elevational shift of avocado orchards into sites with semi-cold climatic conditions, found in the central and northern zones, although they are not suitable for avocado growth The main mechanism for the establishment of avocado orchards has been the replacement of traditional croplands. However, deforestation has taken place since 2015. The massive establishment of new avocado orchards could trigger environmental impacts on forests, hydrology, soils, and biodiversity, including the integrity of the monarch butterfly’s migration.

This research was partially funded by PAPIIT-DGAPA UNAM projects IN209716 and IN214820.

Data will be available under reasonable request.

The first author thanks the academic support of the Graduate Program in Biological Sciences at the Universidad Nacional Autónoma de México and the scholarship received from the Mexican Council of Science and Technology (Conacyt). 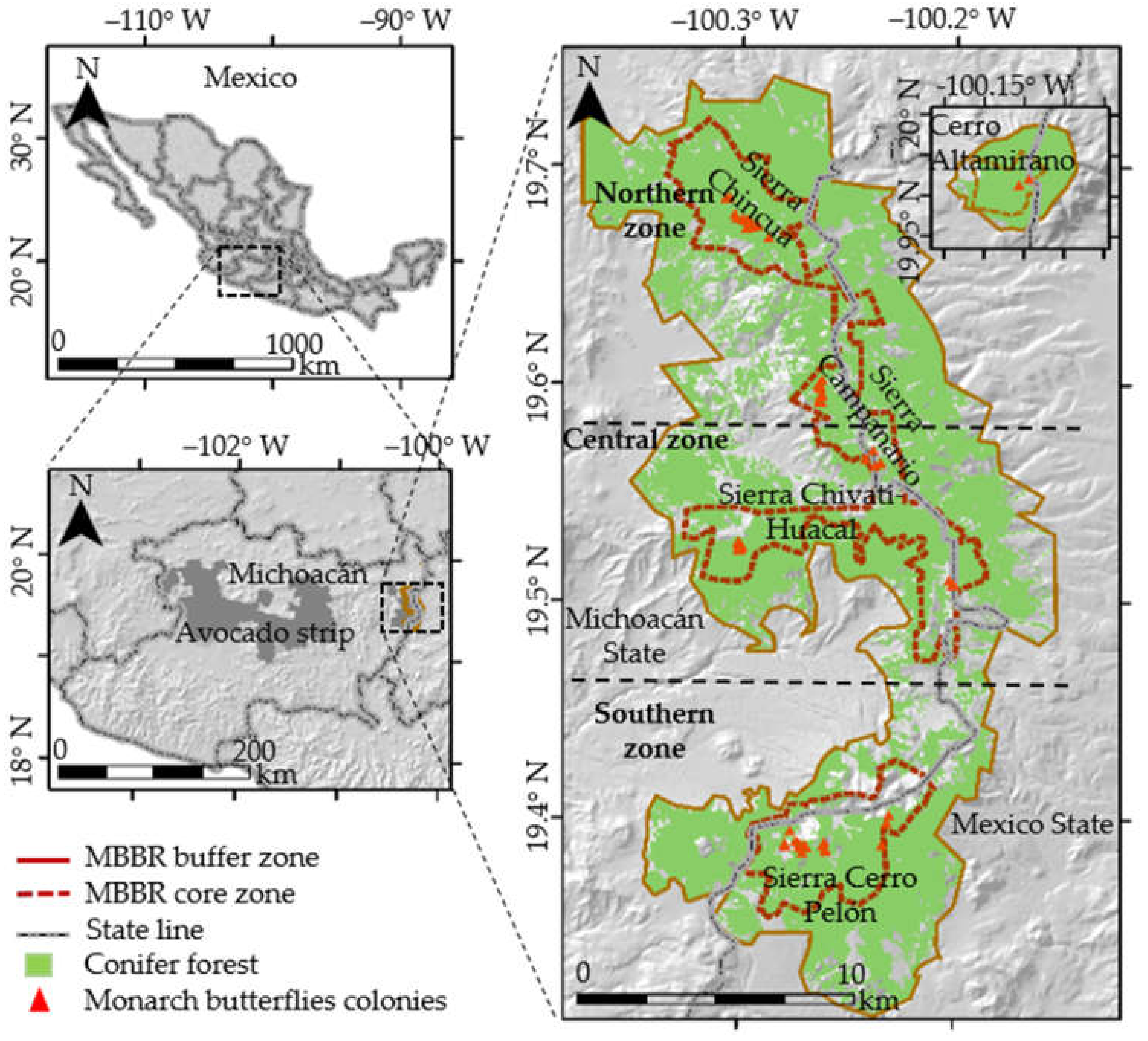 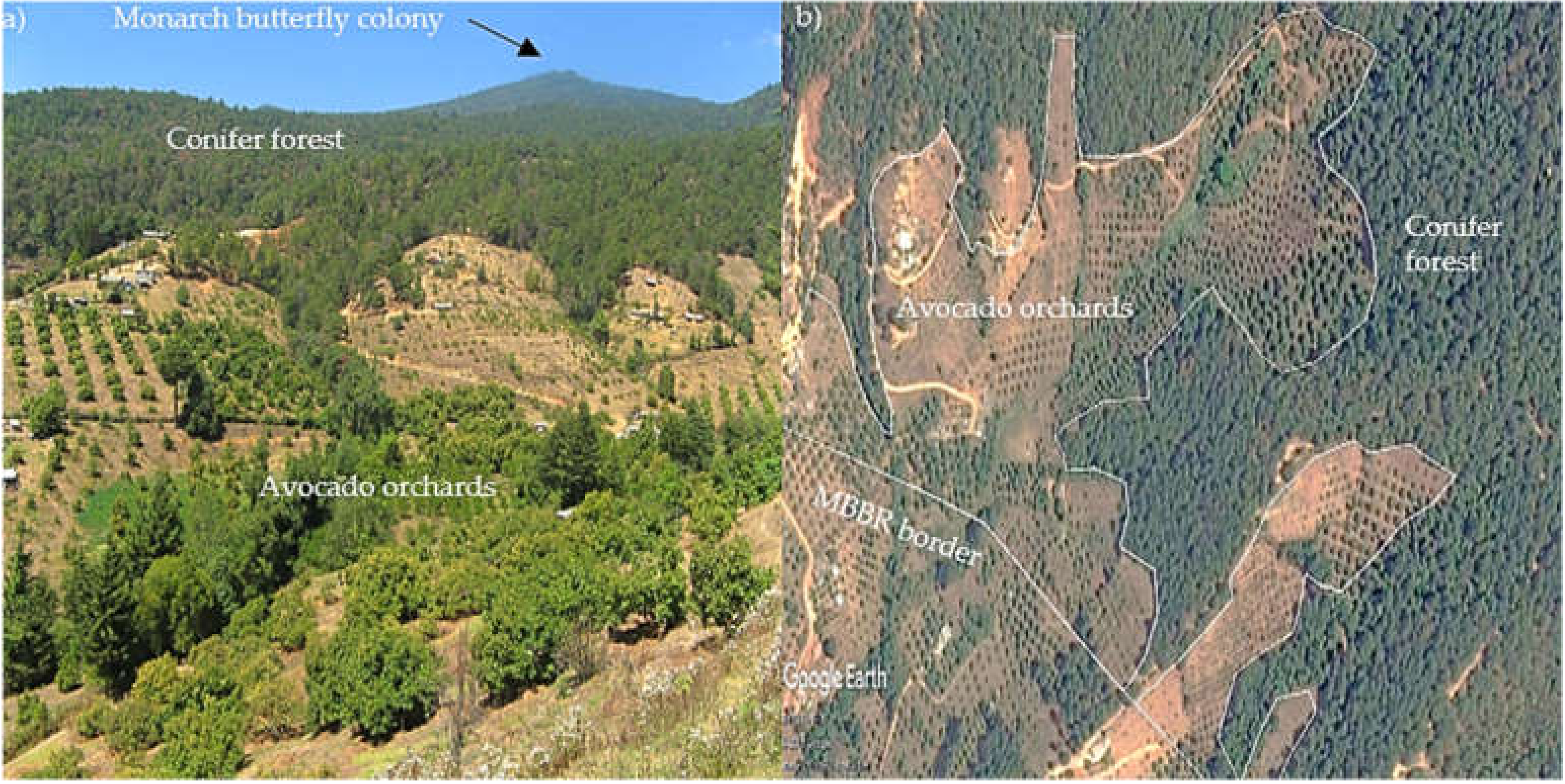 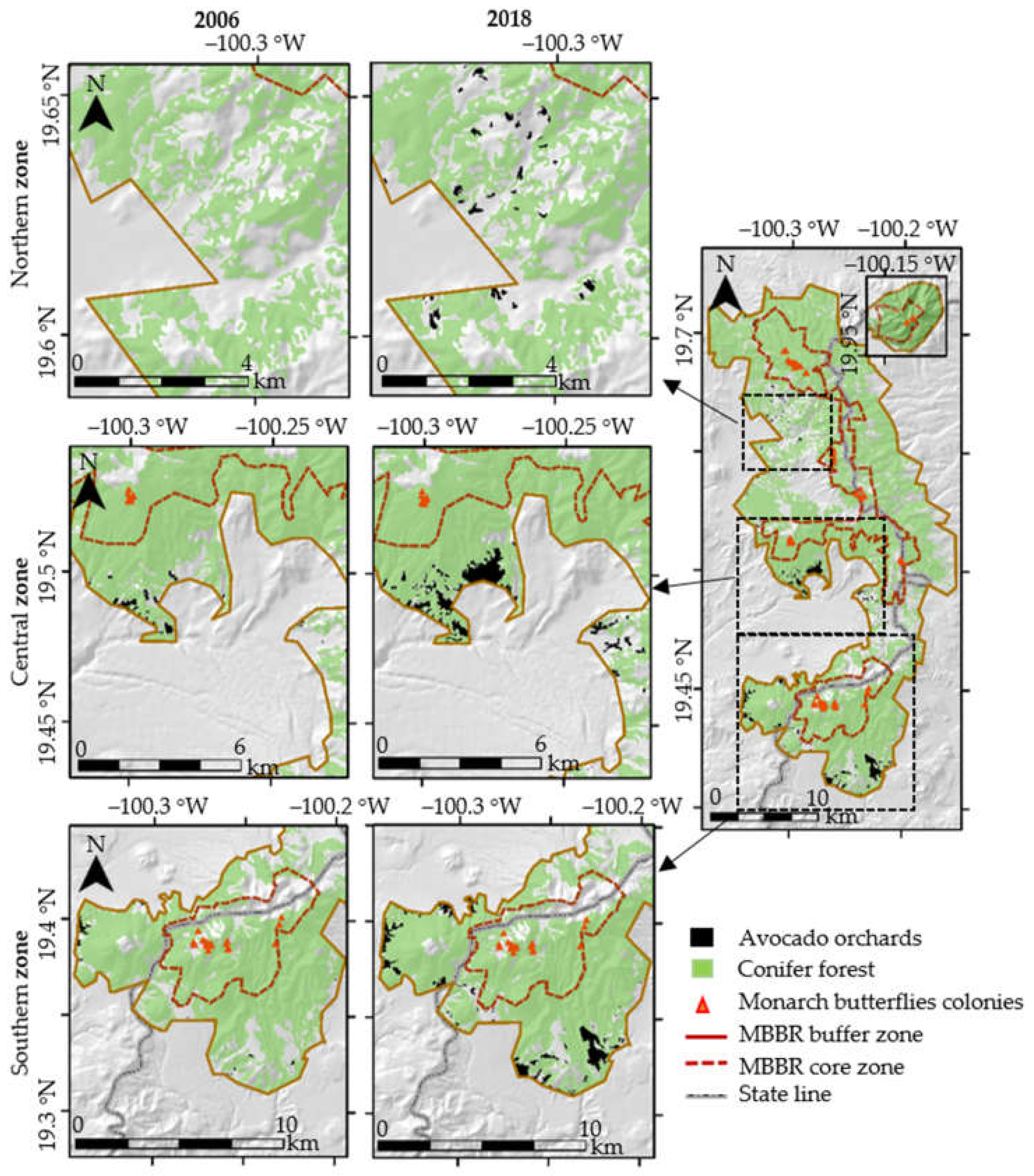