Working to Supply the Demand: Recent Advances in the Science of Zoo Animal Welfare
Previous Article in Special Issue

Common bottlenose dolphins (hereafter referred to as ‘dolphins’), Tursiops truncatus, that inhabit brackish inshore estuaries have been observed in salinities ranging from 15 to 25 ppt. These inshore dolphins can suffer adverse health effects from prolonged freshwater exposure and pollution introduced from surface runoff [1,2,3,4,5], which can occur as a result of natural climatic events. For example, a high-precipitation event that coincided with local agricultural pesticide applications and reduced bay salinities to <10 ppt for several months was likely associated with a dolphin Unusual Mortality Event (UME), a period in which there is a significant die-off of a marine mammal population, along the mid-Texas coast [6]. Poor water quality, prolonged freshwater exposure, and changes in water temperature were associated with increases in dolphin skin lesion prevalence and extent in multiple populations [1,2,4,7,8]. Additionally, abrupt changes in water quality and salinity caused by floods were associated with the development of poxvirus-like skin lesions on Indo-Pacific bottlenose dolphins, Tursiops aduncus [9]. While an increasing number of studies show associations between poor water quality conditions, low salinities, and negative health complications in dolphins, there is still much to learn about how dolphins behaviorally respond to potentially harmful water quality conditions and low salinities in their habitat.
Natural climatic events, such as floods, can drastically alter water quality by affecting salinity, water temperature, dissolved oxygen (hereafter abbreviated as ‘DO’), pH, turbidity, nutrient levels, organic matter loadings, and primary productivity in estuaries over a short time period [10,11,12], which can have impacts on dolphins. It may take several months for estuaries to return to normal levels, depending on the intensity of the flood [10,12]. Dolphins may respond to flood events by leaving the area and/or moving to areas with higher salinities. For example, Fury and Harrison [10] found that Indo-Pacific bottlenose dolphins left two Australian estuary systems during flood events. Dolphins were more commonly found in higher-salinity areas, such as deep channels, following a hurricane that caused salinity to drop below 11 ppt for several weeks in Galveston Bay, Texas [8]. Conversely, other studies have found that dolphins do not leave an area when water quality conditions deteriorate. Mazzoil and colleagues [13] did not find correlations between dolphin density and salinity, sea surface temperature, and contaminant loads despite high levels of freshwater intrusion and contaminants from agricultural runoff in the Indian River Lagoon, Florida. In the Texas UME, stranding records showed that dolphins likely died inshore, suggesting that dolphins remained in the bay system despite low salinity levels and high concentrations of pesticides [6]. Given the varied responses of dolphins to potentially harmful water quality conditions and low salinities, more information is needed to understand when and why dolphins choose to leave (or not leave) an area when water quality conditions deteriorate and whether dolphins are able to mitigate negative impacts from environmental changes. A record-breaking flood event in Pensacola Bay, Florida provided a natural experiment to explore how dolphins responded to abrupt changes in their environment.
On 29 April 2014, over 50 cm of rain fell in the Pensacola, Florida area [14], resulting in an unprecedented three-meter freshwater surface layer over the entire Pensacola Bay estuary, which lasted several months [15]. A population dynamics study on the inshore Pensacola Bay dolphin community was ongoing at the time [15], providing an opportunity to examine dolphins’ behavioral response to this record-breaking flood. Twenty-seven percent of dolphins observed within three weeks of the flood had skin lesions, which was an increase in skin lesion prevalence compared to the previous session. Skin lesion prevalence remained elevated during flood conditions [15]. However, only 20% of all identified dolphins observed within six months following the flood were seen with skin lesions [16]. Additionally, there was no significant increase in mortality events following the flood based on local stranding data [16]. Combined results indicate a lack of community-wide health complications [16] despite unprecedented levels of sustained fresh water (<5 ppt) throughout the estuary and the influx of nutrients and contaminants from runoff (Table 2, Figures S3–S8). Finally, there was no evidence of a decline in seasonal abundance following the flood to indicate that dolphins may have left the area [15]. These results were surprising given the strength of the flood and the duration of flood-impact on the estuary. Pensacola Bay regularly experiences seasonal hypoxia and stratification of water temperature and salinity depending on the degree of mixing in the water column [17]. Considering the regular occurrence of water column stratification and the large amount of freshwater intrusion during the flood, dolphins may have altered their distribution toward higher salinities in order to mitigate their freshwater exposure. The purpose here is to explore this hypothesis by examining noticeable dolphin distribution changes in response to the flood and determining whether dolphins avoided freshwater areas by moving south toward the estuary mouth and/or moving toward deeper water (>3 m) to get under the freshwater surface layer. Associations between environmental variables and dolphin distribution were also examined to identify environmental variables that potentially influence dolphin distribution during flood conditions. If dolphins avoided freshwater areas, it was expected that salinity and depth would be associated with dolphin distribution during flood conditions.

This study was conducted according to the guidelines of the Declaration of Helsinki, and approved by the Institutional Review Board (or Ethics Committee) of University of Central Florida (protocol code 15-33W on 8 June 2015). Dolphin survey data were collected under a National Park Service permit number of GUIS-2015-SCI-0043 and NMFS Scientific Research Permits No. 19062.

This work would not have been possible without the interns and volunteers who were involved in data collection/processing. We would like to thank our colleagues at the Environmental Protection Agency for providing the environmental CTD data and respective R code developed; especially to James Hagy for your insight, patience, and guidance. Thank you to the University of West Florida’s Center for Diagnostics and Bioremediation program and faculty for their incredible support. Many institutions and organizations contribute environmental data to the online open access portals that we accessed, and we are grateful for all of the collaborative efforts to collect and maintain these invaluable datasets. Thank you to Krystan Wilkinson, Randall Wells, and the anonymous manuscript reviewers for their constructive comments. 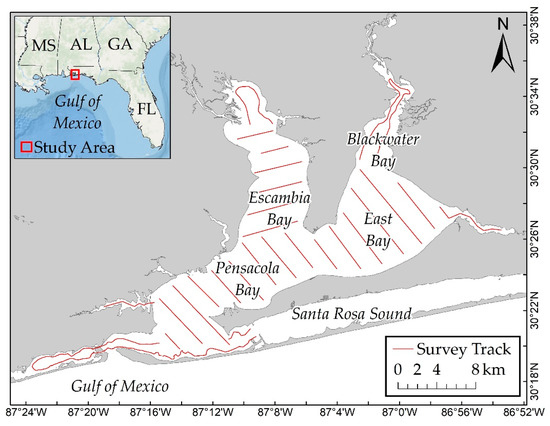 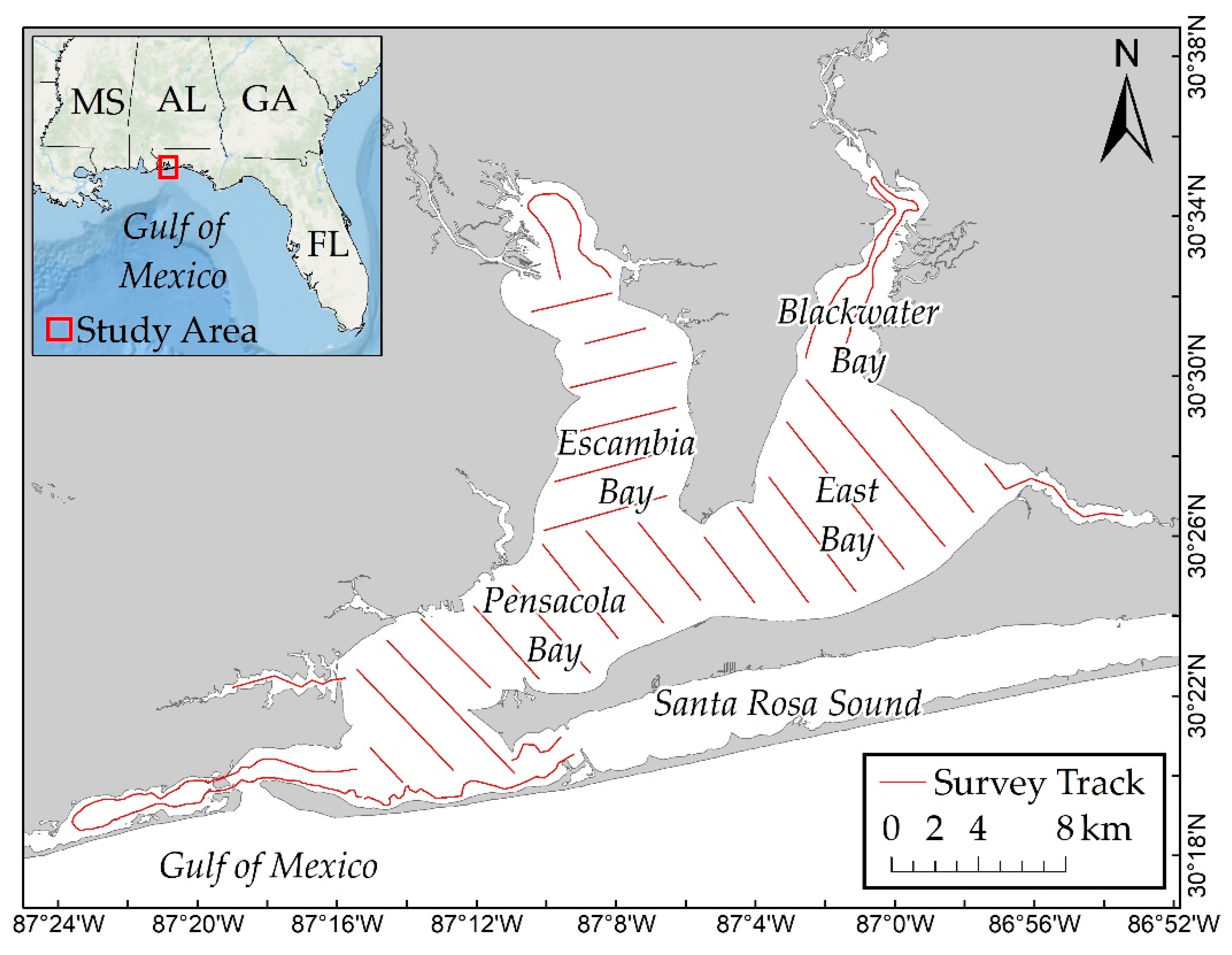 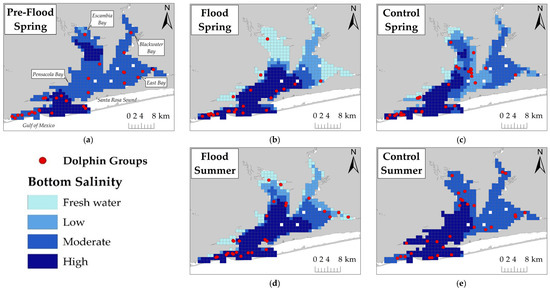 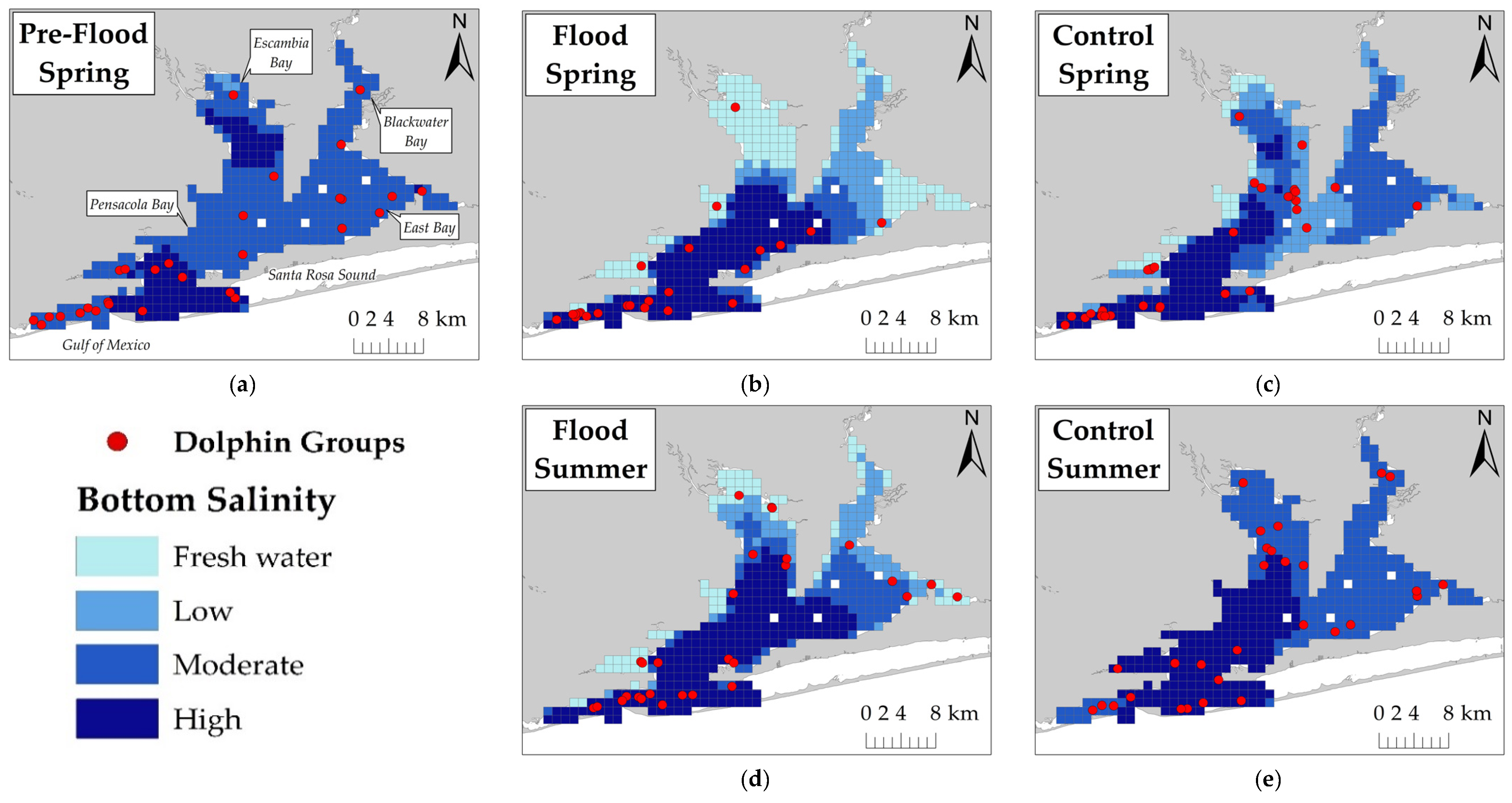 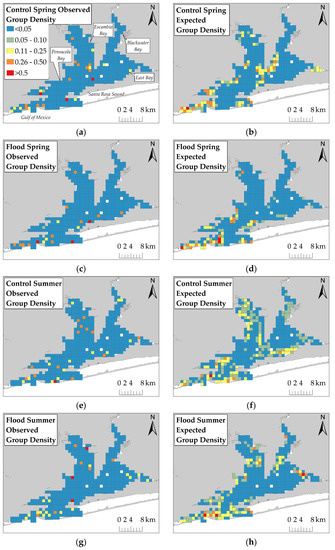 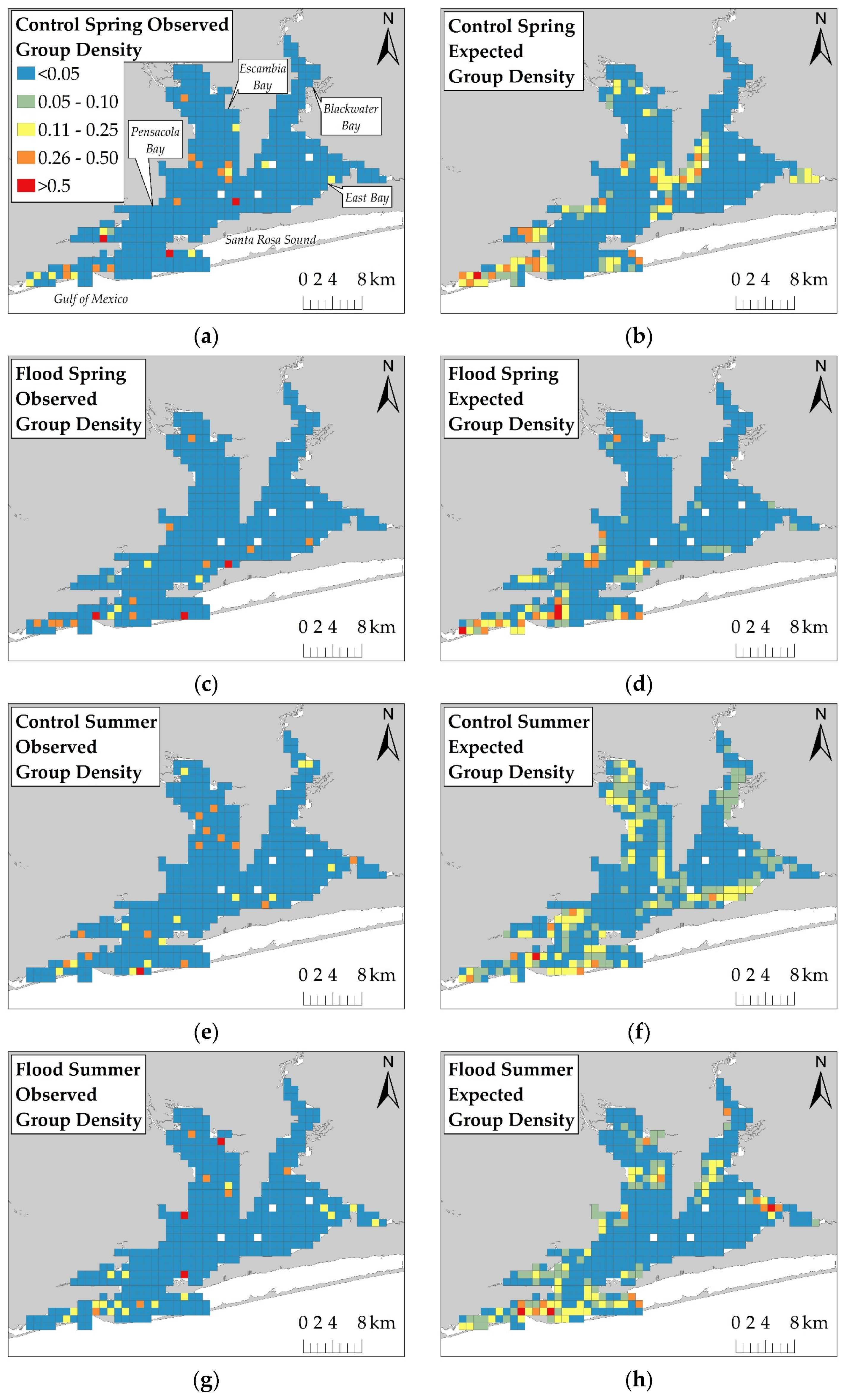