Are Microsatellite Patterns Specific for Tumor Types? A Pilot Investigation

Objective: Human papillomaviruses (HPVs) are DNA viruses, of which over 120 types have been identified. The main screening methods for HPV-DNA include the hybrid capture II (HC-II) and polymerase chain reaction (PCR) assays. Liquid-based cytology (LBC) is a high-quality technique developed to improve the diagnostic reliability of traditional Papanicolaou tests (Pap tests). However, relatively few studies have compared the efficacy of PCR and HC-II assays using cervicovaginal LBC specimens. In this study, we conducted a comparative analysis with results derived from the HC-II assay to assess whether a PCR-based assay using a novel carboxyfluorescein (FAM)-labeled primer could be applied to cervicovaginal LBC specimens. Methods and Results: We analyzed 59 specimens diagnosed as atypical squamous cells of undetermined significance (ASCUS) by Pap tests. After extracting DNA from cervicovaginal LBC specimens, we performed PCR using a FAM-labeled consensus primer, and then conducted fragment analysis to confirm the results. The value of the kappa statistic measuring the agreement between the PCR and HC-II results was 0.8557, or “almost perfect agreement.” Conclusion: Our novel HPV-PCR assay can be successfully applied to cervicovaginal LBC specimens for the detection of HPV subtypes.
Keywords: human papillomavirus; polymerase chain reaction; hybrid capture II assay; liquid-based cytology; cervical cancer human papillomavirus; polymerase chain reaction; hybrid capture II assay; liquid-based cytology; cervical cancer

Human papillomaviruses (HPVs) are DNA viruses, of which over 120 types have been identified. HPVs are categorized into non-oncogenic, low-risk types (types 6 and 11), and oncogenic, high-risk types (types 16, 18, 31, 33, 35, 52, 58, and others) [1,2,3]. Condyloma acuminata (genital warts) are caused by low-risk HPV subtypes (6 and 11) and have a low risk of progression to malignancy [4,5]. In contrast, high-risk HPVs are known to induce cervical intraepithelial neoplasia, which can develop into invasive cancer [1,2,3]. The rate of progression to malignancy is approximately 10‒20%. In particular, HPV 16 and 18 have been reported to be detected in approximately 70% of cervical cancer cases [6,7,8,9].
Approximately 300,000 deaths from cervical cancer are reported globally every year, making it the second most lethal cancer in women [10,11]. Regular Papanicolaou tests (Pap tests) are vital to detect precancerous lesions and prevent their progression into cervical cancer. However, despite the numerous studies that have demonstrated that Pap testing has drastically reduced the incidence of cervical cancer, the diagnostic sensitivity of Pap tests for detecting cervical intraepithelial neoplasia above grade 2 (CIN2+) is relatively poor and is estimated to be only 53‒65% [12,13,14,15]. However, HPV-DNA testing has been reported to have a diagnostic sensitivity of greater than 90% for CIN2+ lesions [15,16,17]. Accordingly, it has been anticipated that early diagnosis of cervical cancer can be greatly improved by using both Pap tests and HPV-DNA tests. However, combining these two tests has been shown to improve detection sensitivity by only 5%, compared with the sensitivity of the HPV-DNA test alone [18]. Therefore, European countries have begun to adopt the practice of performing HPV-DNA testing first, followed by Pap tests only if the DNA test result is positive.
The hybrid capture II (HC-II; QIAGEN, Valencia, CA, USA) technique involves the hybridization of the HPV-DNA specimen with an RNA probe cocktail and capturing the resulting DNA-RNA hybrid onto the surface of a microplate well coated with antibodies specific to the DNA-RNA hybrids, which yields a chemiluminescent readout. As this method does not involve the amplification of HPV-DNA and instead combines the HC-II method with chemiluminescence, it has a high sensitivity for the detection of HPV-DNA. This method has also been proven with respect to its clinical specificity and sensitivity, and is therefore widely used in Japan as well [19]. HC-II is performed for atypical squamous cells of undetermined significance (ASCUS) cases in Pap tests. In recent years, PCR-based genotyping analysis has also been adopted as a screening method to detect HPV-DNA [20,21]. Although PCR amplification greatly increases the signal sensitivity for HPV-DNA, the excessive amplification can lead to unnecessary medical tests and treatments. Therefore, there is such a problem in clinical application of highly sensitive HPV-PCR. Although comparisons of the HPV-DNA detection rates between PCR and HC-II assays have shown that PCR has a greater detection rate, most studies have reported that PCR results are largely in agreement with HC-II results [22,23,24]. On the other hand, there have been reports that the results from PCR and HC-II are not consistent [25]. In addition, many countries have begun to recognize the usefulness of liquid-based cytology (LBC) specimen collection, which was developed to improve the homogeneity of Pap test specimens and the standardization of results [26,27]. However, only a few studies have assessed whether the results derived from PCR assays on cervicovaginal LBC specimens agree with HC-II results. Furthermore, to our knowledge, no studies have compared the HPV-DNA detection rates of PCR assays involving a carboxyfluorescein-labeled primer with those of HC-II assays.
Since it is widely known that HPV affects cell morphology, HPV infection in ASCUS was examined using HC-II and PCR. In this study, we describe a procedure for HPV-DNA detection using PCR with a novel carboxyfluorescein-labeled primer. We conducted fragment analysis using a high-sensitivity capillary sequencer to confirm the PCR results. To assess whether this PCR-based technique for HPV screening can be applied to the detection of HPV-DNA from specimens collected through cervicovaginal LBC, we also performed a comparative analysis with results from HC-II assays.

The study included a total of 59 patients diagnosed with indeterminate ASCUS by Pap tests using cervicovaginal LBC specimens from Saijo Central Hospital (Saijo, Japan) and who underwent the HC-II test.
Pap tests were screened by one cytotechnologist in routine medical examination. A total of 59 LBC specimens were collected between July 2018 and January 2019. LBC samples for Pap tests were usually collected with a brush, or cotton swabs were used for pregnant women.
All samples underwent HC-II testing by an outsourcing company (BML, Tokyo, Japan). The cervicovaginal samples were collected with a Cervex-Brush® (Rovers Medical Devices B.V., Lekstraat, The Netherlands), then fixed in a BD SurePath™ collection vial (Becton, Dickinson and Company, Franklin Lakes, NJ, USA) for Pap staining. The specimens used for HC-II included one residual clinical sample from a Pap test collected through cervicovaginal LBC and 58 new samples taken with swabs (10 cases) or brushes (48 cases). Resampling of HC-II analysis was performed within about 1 month of diagnosing ASCUS.
Comprehensive informed consent was obtained for all subjects in the form of opt-out in the Saijo Central Hospital, and the study was approved by the ethics committee of the Saijo Central Hospital (approval date: 23 February 2018). All procedures were performed in accordance with the Helsinki Declaration

We performed PCR using the TaKaRa Taq™ (Takara Bio, Tokyo, Japan). The primers were designed to target the E6 and E7 genes of HPV. We used the forward primer: 5′-TGTCAAAAACCGTTGTGTCC-3′, to detect high-risk HPV types (types 16, 18, 31, 33, 35, 52b, and 58), and the forward primer (5′-TGCTAATTCGGTGCTACCTG-3′) for detecting low-risk HPV types (types 6 and 11). A carboxyfluorescein (FAM)-labeled consensus primer (5′-GAGCTGTCGCTTAATTGCTC-3′) was inserted into both forward primers. PCR was performed using the following conditions: denaturation at 94 °C for 30 s, annealing at 55 °C for 1 min, and elongation at 72 °C for 30 s, for a total of 40 cycles.

The detection results from our HPV-PCR using a FAM-labeled primer demonstrated almost perfect agreement with the results generated from HC-II assays, suggesting that our HPV-PCR can be successfully applied to specimens collected through cervicovaginal LBC. Our novel HPV-PCR also detected DNA from both high-risk and low-risk HPV types. While the HC-II method requires no special apparatus or equipment, our HPV-PCR is equally convenient, and can be easily performed in a clinical laboratory.

The authors report no conflicts of interest. 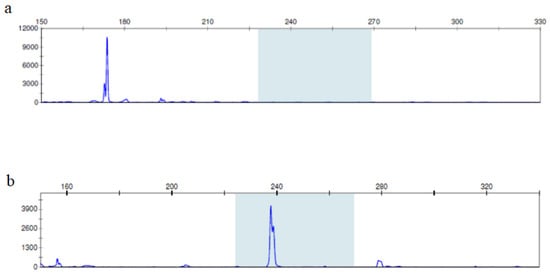 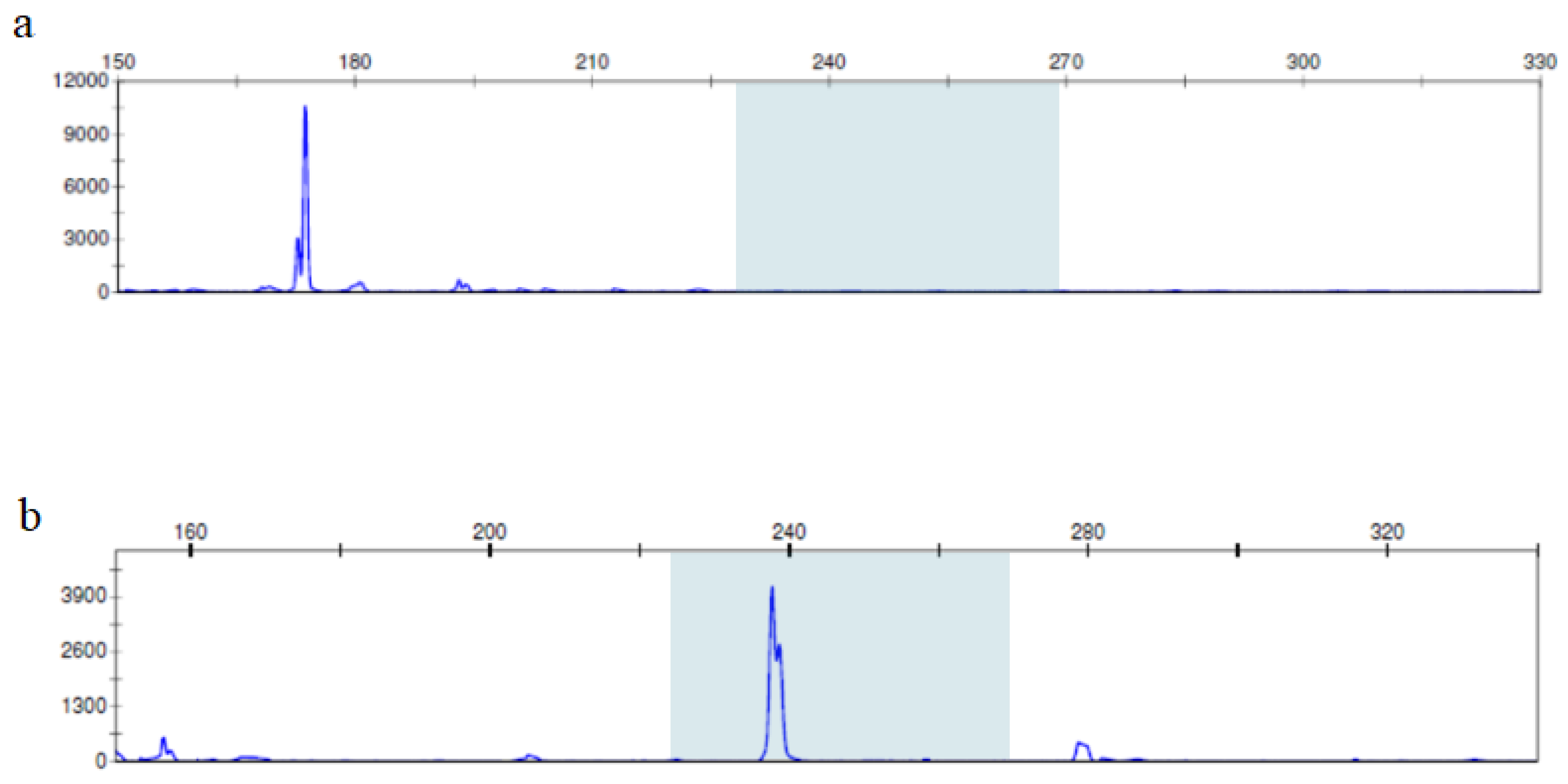