As the future of nuclear power is uncertain, only choosing one development objective for the coming decades can be risky; while trying to achieve several possible objectives at the same time may lead to a deadlock due to contradiction among them. In this work, we study a simple scenario to illustrate the newly developed method of robustness study, which considers possible change of objectives. Starting from the current French fleet, two objectives are considered regarding the possible political choices for the future of nuclear power: A. Complete substitution of Pressurized Water Reactors by Sodium-cooled Fast Reactors in 2180; B. Minimization of all potential nuclear wastes without SFR deployment in 2180. To study the robustness of strategies, the disruption of objective is considered: the objective to be pursued is possibly changed abruptly from A into B at unknown time. To minimize the consequence of such uncertainty, the first option is to identify a robust static strategy, which shows the best performance for both objectives A and B in the predisruption situation. The second option is to adapt a trajectory which pursues initially objective A, for objective B in case of the disruption. To identify and to analyze the adaptively robust strategies, outcomes of possible adaptations upon a given trajectory are compared with the robust static optimum. The temporality of adaptive robustness is analyzed by investigating different adaptation times. View Full-Text
Keywords: electro-nuclear scenario; robustness; disruption of objective; adaptation; temporality electro-nuclear scenario; robustness; disruption of objective; adaptation; temporality
►▼ Show Figures 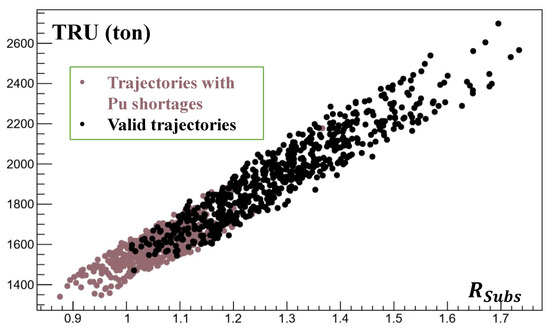