A human oocyte and its supportive cells, known as granulosa cells, are interdependent throughout ovarian development and ovulation for successful fertilization [1]. Oocytes isolated from primordial follicles fail to grow without the aid of granulosa cells [2,3]. Cumulus cells are the innermost subgroup of granulosa cells surrounding the oocyte and play a key role in oocyte maturation and fertilization. Cumulus cell function depends on the gap junctions between cumulus cells and the oocyte, which allow rapid transfer of molecules to the oocyte [4,5]; so, the quality of cumulus cells is thought to reflect oocyte quality. Therefore, transcriptomic profiling of cumulus cells is useful in identifying biomarkers indicating the developmental ability of oocyte maturation (Figure 1a).
The classification of mature cumulus–oocyte complexes (COCs), based on morphology, was first described in the 1980s [6] and has been used for many decades [7,8,9,10].
In the human menstrual cycle, only less than 1% of follicles lead to ovulation, and more than 99% of follicles lead to atretic follicles [11]. We have used these criteria for more than a decade and reported that the oocytes classified as “dysmature” exhibit a remarkably lower fertilization rate, compared to COCs that are in the process of maturation [12]. Our previous studies revealed significant differences in gene expression of DCCs compared to COCs that are in the process of maturation [13], and DCCs are reportedly associated with apoptosis [13] and autophagy-independent cell death [1,12].
To date, several studies using next-generation sequencing (NGS) to examine cumulus cells or granulosa cells have been conducted. Using NGS, it is possible to comprehensively investigate gene expression in samples, because it can determine millions of sequences at once. For example, Hu et al. [14] reported the cause of insulin resistance in polycystic ovarian syndrome (PCOS) analyzing cumulus cells. Xu et al. [15] searched the difference in gene expression of mouse cumulus cells with and without blastocyst formation. Fuchs et al. [16] studied the difference in the gene expression of human cumulus granulosa cells based on the types of drugs used to trigger IVF cycles. Although other studies using NGS for cumulus cells are also present [17,18], there have been a few studies on the gene expression related to COC maturity.
As described above, the evaluation of COC maturation is useful to estimate oocyte quality. Furthermore, the procedure used to assess cumulus cells is more straightforward than assessing the oocyte without damaging it. Nevertheless, there have been a few studies that estimate the difference in gene expression based on the maturity of COCs.
In the present study, we compared DCCs, which would become atretic follicles, with COCs that are in the process of maturation, and used NGS to search for candidate genes associated with follicular development, lower fertilization rate, apoptosis, and autophagy.

This study was reviewed and approved by the ethical committee of the National Center for Child Health and Development (# 581, 3 July 2012). Women presenting unexplained infertility aged 33–42 years who underwent assisted reproductive technology (ART) were included. Briefly, cumulus cells were collected from patients who consented to participate in this study. Based on the morphological criteria, DCCs were selected, and COCs that are in the process of maturation were categorized as control (Supplemental Table S1). Twenty samples of cumulus cells were collected from patients who provided consent for their samples to be used for research purposes.
The patients underwent standard in vitro fertilization (IVF) treatment, which included gonadotropin administration to induce multiple follicular development, and transvaginal oocyte aspiration. COC retrieval was performed by vaginal puncture under ultrasound echo-guidance 36 h after human chorionic gonadotropin (hCG) administration (10,000 IU). The classification of COCs was based on the following morphological criteria: We defined DCCs as the presence of dark spots in the layers of cumulus cells, with or without complete expansion with a visible halo of the cumulus layer, to distinguish them from maturation cumulus cells (Figure 1b). The cumulus cells were mechanically removed at 40 h after hCG administration, before conventional IVF or intracytoplasmic sperm injection, washed in Sydney IVF fertilization (COOK Medical, Brisbane, Australia) medium, and frozen individually before total RNA extraction. The sample collection flow is shown in Figure 2.

Uniquely aligned reads were quantified, and both gene and exon-level reads per kilobase per million mapped read (RPKM) values were calculated. The RPKM values represent counts of reads mapping a feature (gene, or exon), normalized to both overall sequencing coverage and the size of the feature [19].
Before gene expression analysis and the use of log-transformed and base-lined counts, we performed principal component analysis (PCA) and hierarchical clustering to overview the expression profiles of all samples. The values were normalized to mean 0 and variance 1 before applying log transformation.
Differentially expressed genes in DCCs were identified based on a 2-fold change compared to the mean value of the control, and statistical significance based on p-value < 0.05, using one-way analysis of variance (ANOVA), followed by post hoc analysis using Student–Newman–Keuls. The list of differentially expressed genes was utilized for gene ontology (GO) analysis for biological/molecular function, using Strand NGS with a false discovery rate-corrected p-value < 0.01. Furthermore, the list of differentially expressed genes was analyzed for pathway enrichment analysis using WikiPathway, and statistical significance was set at a p-value < 0.05.

Cumulus cells prepared as described above were permeabilized with 0.5% Triton X-100 in phosphate-buffered saline (PBS) for 5 min at 25 °C and blocked with 1% BSA and 0.1% Tween 20 in PBS for 1 h at 25 °C. The samples were incubated overnight at 4 °C with monoclonal anti-β-Catenin-Cy3 conjugate (C7738, Sigma, St Louis, MO, USA), prepared at a 1:500 dilution in Dako antibody diluents (Dako, Carpinteria, CA, USA). The complexes were then washed three times with 0.1% Tween 20 in PBS. The nuclei were then counterstained with 4′,6-diamidino-2-phenylindole (DAPI) at a final concentration of 10 μg/mL in 0.1% Tween 20 in PBS for 30 min at 25 °C. Thereafter, samples were washed three times with 0.1% Tween 20 in PBS, immersed in Vectashield (Vector Laboratories Inc., Burlingame, CA, USA), and covered with coverslips. Microphotographs were captured using a confocal laser scanning microscope LSM510 Meta (Carl Zeiss MicroImaging, Inc., Thornwood, NY, USA). Photographs captured from three different areas of each sample were analyzed using Olympus DP Controller and DP Manager (Olympus, Tokyo, Japan). In each experiment, at least 300 cells were measured in randomly selected microscopic fields.

Sequencing data for each sample resulted in approximately 10–27 M reads (Supplemental Table S3). Among the raw sequence reads, 77–85.5% aligned with the human genome sequence (Supplemental Table S3). Read counts were converted to RPKM [19] to assess global gene expression profiles. Based on the gene expression patterns, PCA was carried out, followed plotting 20 samples that were divided into DCCs and control. The results showed that samples collected from DCCs were differentially located compared to the control (Supplemental Figure S1a).

To determine the statistical difference in gene expression between DCCs and the control, we performed a one-way ANOVA followed by pair-wise comparisons. Among genes with a statistical significance, we selected those with two-fold differential expression. The Venn diagrams show genes with both two-fold differential expression and a statistical significance threshold, analyzed using a one-way ANOVA. Among these, 165 genes were upregulated, while 363 were downregulated (Supplemental Figure S1b, Supplemental Table S4).

We performed GO analysis to examine the enrichment of biological processes, molecular function, and cellular components and identify biological characteristic for differentially expressed gene list. Upregulated genes were enriched in four functions: single-organism processes, cellular processes, metabolic processes, and response to stimuli. Whereas in downregulated genes, only the plasma membrane portion was enriched in cellular components (Supplemental Table S5).
In upregulated genes, biological processes such as mitotic prometaphase, mitotic metaphase and anaphase, cell cycle checkpoints, kinesins, and mitotic G1-G1-S phases were affected significantly (all, p < 0.0001) (Supplemental Table S6). In contrast, the Wnt signaling pathway and pluripotency, the integrated pancreatic cancer pathway, platelet homeostasis, arachidonic acid metabolism, and the netrin-1 signaling pathway were significantly affected in downregulated genes (all, p < 0.01) (Table 1).
Among downregulated genes, we focused on those associated with Wnt signaling, since they were reportedly associated with the state of oocytes and cumulus cells [20,21]. When relative values of gene expressions were estimated, the expressions of five genes were significantly reduced in DCCs. Two cytokines (WNT9B and WNT10B) were significantly downregulated in DCCs (4.095 vs. 1.0, and 2.444 vs. 1.0, DCCs and the control, respectively; p = 0.0007 and p = 0.0001). Frizzled-7 (FZD7), one of the Wnt receptors, was expressed in cumulus cells, and its expression was significantly reduced in DCCs (2.052 vs. 1.0; p < 0.0001). AXIN2 binds to various proteins constituting the Wnt signaling pathway, and its expression was also significantly reduced in DCCs (2.150 vs. 1.0; p < 0.0001). Besides, the expression of Cyclin D1 (CCND1), a representative gene among target genes associated with cell proliferation and the cell cycle, was also reduced in DCCs (2.835 vs. 1.0; p = 0.0001) (Figure 3a). As depicted in Figure 3b, we presumed that these reduced gene expressions impair the transduction of the Wnt signaling pathway in the DCCs.
Based on the above results, we considered the possibility that the Wnt signaling pathway might not be acting only in DCCs compared to the control. Therefore, immunostaining was performed using β-catenin in DCCs and control. The cells were immunostained with β-catenin, and the nuclei were stained with DAPI. Of these cells, DCCs and control exhibited remarkable immunoreaction with β-catenin, but a difference in fluorescence patterns between these cells was also noted (Figure 4a).
Although β-catenin was diffusely localized in the cytoplasm of DCCs and control, it also appeared to be localized in intracellular structures, such as the nuclear membrane in DCCs (Figure 4b,c). The number of β-catenin-expressing cells was higher in DCCs than in control (Figure 4d). Our results suggested that excess β-catenin expression was similar in DCCs and control, but subcellular β-catenin localization was distinct between these cells, implying that the progression in CC maturation may result from altered localization β-catenin. Therefore, we assumed that these cells might be classified differently in different situations.
Dysfunction of the Wnt/β-catenin signaling pathway may be a factor, resulting in follicle atresia, lower fertilization rate, or abnormal embryogenesis, compared to other cumulus cells. These results suggest that DCCs are indeed present in atretic follicles and can be distinguished from other cumulus cells in the maturation process by morphological evaluation.

This work was supported by the Ministry of Education, Culture, Sports, Science, and Technology Supported Program for the Strategic Research Foundation at Private Universities (S1311017). 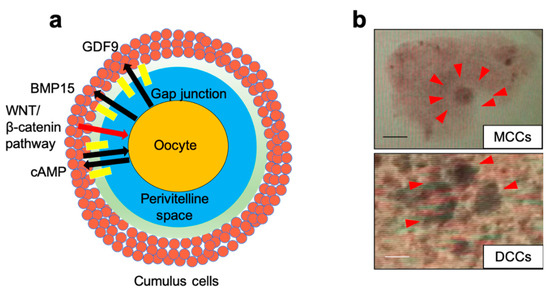 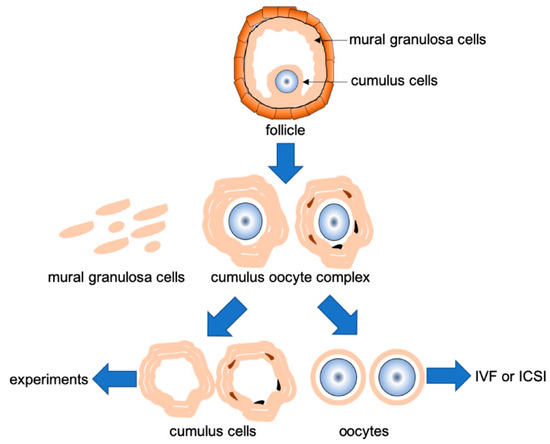 Table 1. Downregulated pathways in DCCs.
Table 1. Downregulated pathways in DCCs.
Nine DCC samples were analyzed, and downregulated pathways were presented.
© 2020 by the authors. Licensee MDPI, Basel, Switzerland. This article is an open access article distributed under the terms and conditions of the Creative Commons Attribution (CC BY) license (http://creativecommons.org/licenses/by/4.0/).
We use cookies on our website to ensure you get the best experience. Read more about our cookies here.
Accept
We have just recently launched a new version of our website. Help us to further improve by taking part in this short 5 minute survey here. here.
Never show this again