Characteristics and Problems of Smart City Development in China

:
Nowadays, modeling tools are a crucial part of best practice in the elaboration and implementation of a decarbonization plan in any organization, city, or country. The present review analyzes the different modeling tools available to assess energy systems in smart cities. It creates an updated overview of the modeling tools currently available, showing their capabilities and main potential outputs when considering the energy efficiency objective in the context of smart cities in Europe. A restricted set of 14 tools are identified which optimally fulfill the modeling mission of the energy sector, in a smart city context, for different time horizons. The selection considers the capability to include decarbonization assessments, namely, by considering the flexibility to use different external factors, energy policies, technologies, and mainly the implementation of Article 7 from the Energy Efficiency Directive and the “energy efficiency first” principle defined by the European Commission. The ELECTRE TRI method was used to implement a multi-criteria decision approach for sorting modeling tools, aiming at distributing the various alternatives by previously defined categories, and considering the performance criteria of each alternative modeling tool, the analysis suggests that the best options are the LEAP, MESSAGEix, and oemof tools.
Keywords:
modeling tools; smart cities; decarbonization; electrification; energy efficiency 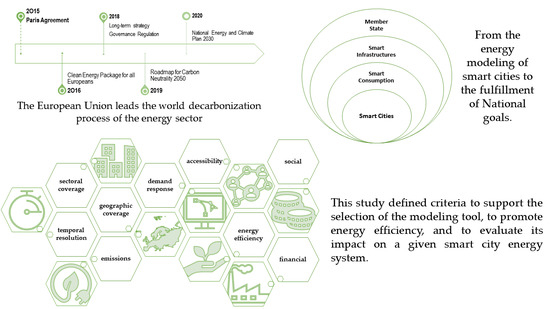 (1)
A quarter (25%) of the total weight of the kj would be allocated according to the criterion that the tool allows analyzing energy efficiency as a result (g6), as the final use of the tool will be to model the contribution of energy efficiency for an energy system.
(2)
For the same reason, but with less importance, it was considered that 15% would be the weight for the evaluation criterion concerning the tools that allow analyzing the impact of demand response measures (g4).
(3)
Below the average, a weight of 10% was considered for the criterion that assessed whether the tool is paid or not (g5), as it will always be important to assess the initial costs for such academic exercise.
(4)
As a less important criterion, the criterion with geographic coverage was considered, which would be 1/5 of the criterion with the greatest weight, 5% (g2). This decision is supported by the previous analysis of the available tools, which practically all cover a city geographic scenario.
(5)
The remaining criteria were given the average remaining value of 9%, as they have the same relative importance.

In summary, Table 3 shows the weights attributed by the authors to the different defined criteria.
Based on the research and tests carried out about the use of the different tools, Table 4 lists the input data of the classification of each of the nine criteria for each of the 14 modeling tools.

The evaluation process was carried out using the EXCEL calculation tool to implement the ELECTRE TRI methodology, starting with the introduction of performance data for 14 modeling tools according to the different criteria, profiles and associated thresholds, and weights. The cut-off level was restricted to the range [0.51, 0.67] since those limits correspond to a simple majority requirement and a two-thirds majority.
In this context of classification of modeling tools, the following categories of increasing importance were defined for consideration of the energy efficiency objective when choosing the most suitable tool: not a good choice (1), good choice (2), very good choice (3), and excellent choice (4). Through the methodology execution, the distribution of alternatives by the categories to a central scenario (without any restriction) was obtained and then conditioned by the restrictions related to the upper and lower limits of each limit of each profile, as presented in Figure 3.
The outputs show very balanced results. However, the results demonstrate that the LEAP, MESSAGEix, and oemof tools are very likely to be the best choices to achieve the proposed objective of assessing the real impact of energy efficiency on a given energy system, namely, on cities. Other hypotheses to consider are the Calliope, EnergyPLAN, RETScreen, and Urbs tools, which also reach the needs in a simple majority scenario [0.51].
Reflecting on the scenario of a two-thirds majority [0.67], the option for LEAP should be considered by students and researchers who do not intend to program the model in Python language (for example) and look for a friendlier interface. However, the MESSAGEix and oemof tools are two open-source tools that have remarkable potential for community development. It is important to mention that this evaluation is conditioned by the authors since other weights can be defined for the proposed criteria.

Electrification is a key strategy to change from fossil to decarbonized resources, but energy efficiency should be the first fuel to be considered in this process due to its faster, more reliable, and cheaper implementation results. As electricity consumption will increase and since, in the short-to-medium term, not all electricity can be generated from renewable energy sources, it will be essential to ensure large-scale efficiency action on consumption in all sectors. However, it is important to move from intentions to action, and the cities’ role is fundamental to achieving this goal. The European Community legislative framework based on the principle of “energy efficiency first” is not enough. Therefore, cities must become smart cities, and for that it is necessary to plan to the horizons 2030 and 2050, considering the impact of energy efficiency programs, in particular the implementation of Article 7 of the EED (Energy Efficiency Directive), which is undoubtedly the strongest European tool to promote energy efficiency.
The impact of the EED implementation will necessarily cause a significant transformation in the energy sector, in terms of energy generation, transmission, distribution, and consumption. If, on the one hand, the modeling tools contemplate the increase in energy efficiency in the technological evolution, as well as the efficient choice of the final consumer when purchasing new equipment, on the other hand, the impacts of political measures, such as the implementation of EED Article 7, are more complex to approach in current modeling tools.
There are several modeling tools available to study the best way to achieve the objective of the energy sector carbon neutrality in the cities, even considering energy efficiency as the first and main measure to achieve this end. However, and without increasing the complexity of the models, the creation of sub-models and the use of different tools, when correctly applied, can generate results more consistent with reality.
The results of the current publication demonstrate that the LEAP, MESSAGEix, and oemof tools are the best options to achieve the proposed objective. It is possible to highlight LEAP, due to its friendlier work environment, as well as the possibility of programming in the MESSAGEix and oemof tools, which are open-source tools for the community. Combining the modeling tools with a multi-criteria decision approach to sorting input and output data, and the use of an energy balance Sankey Diagram, where energy efficiency should be seen as an energy vector, should be a future direction of research in the energy planning of smart cities.

Support for this research was provided by OE—national funds of FCT/MCTES (PIDDAC) under the project UID/EEA/00048/2019. 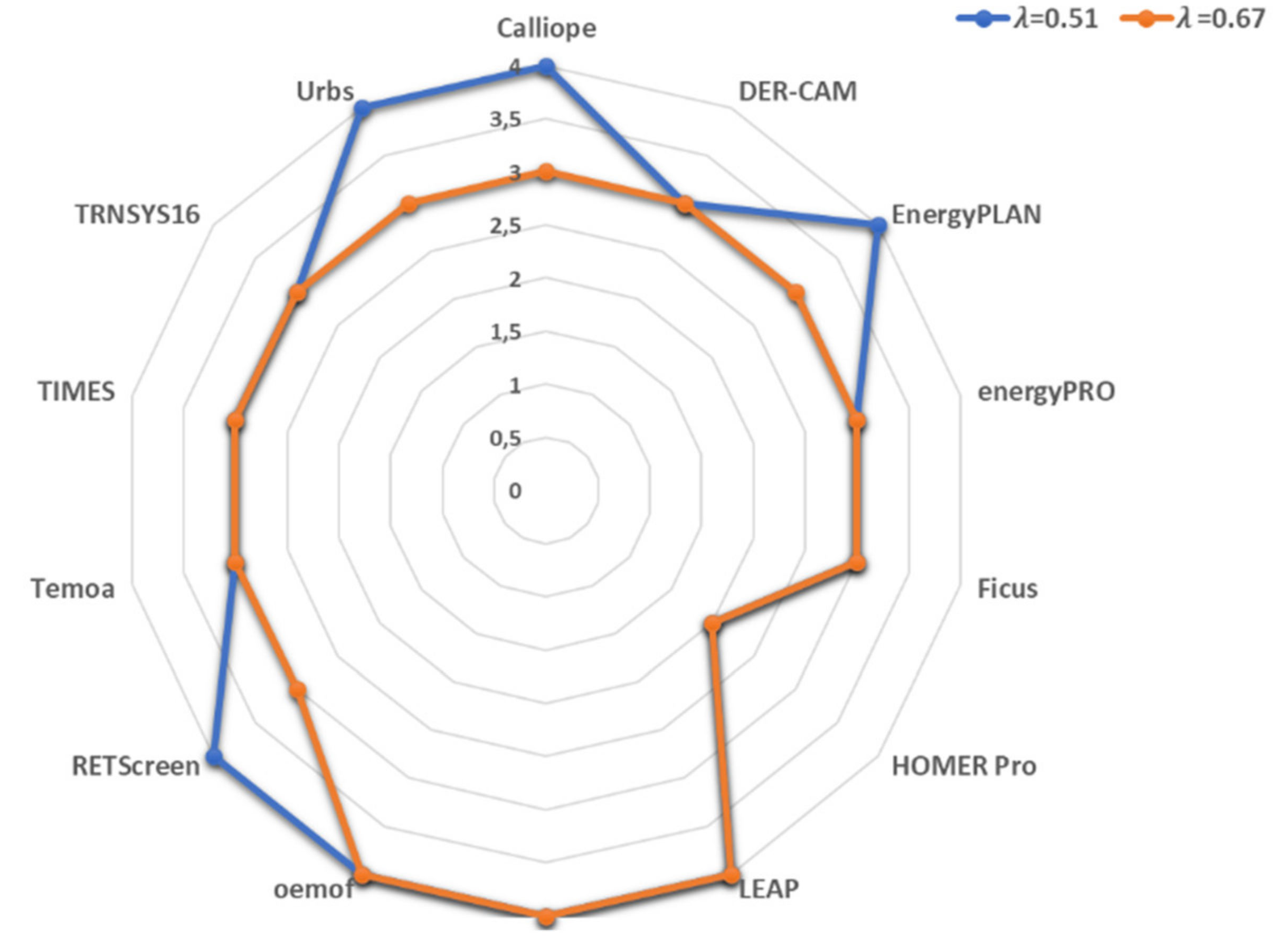