Cannabis and Tramadol are Prevalent among the First Episode Drug-Induced Psychosis in the Egyptian Population: Single Center Experience
Previous Article in Journal

The Hermansky-Pudlak syndrome (HPS) is a rare disease characterized by oculocutaneous albinism and prolonged bleeding. HPS is caused by alterations in HPS1-10 and their related genes, comprising the biogenesis of lysosome-related organelles complex 1–3 and adapter protein 3. Here, we report a Japanese patient with HPS associated with mild hypopigmentation, nystagmus, and impaired visual acuity. Sequencing analyses of the mRNA of this patient revealed new deletions (ΔGA and ΔG) in the HPS5 gene. This was the first case of HPS5 gene deficiency in Japan, and the two above-mentioned deletions have not yet been reported among patients with HPS5. View Full-Text
Keywords: Hermansky-Pudlak syndrome type 5; oculocutaneous albinism; platelet aggregation; variant Hermansky-Pudlak syndrome type 5; oculocutaneous albinism; platelet aggregation; variant
►▼ Show Figures 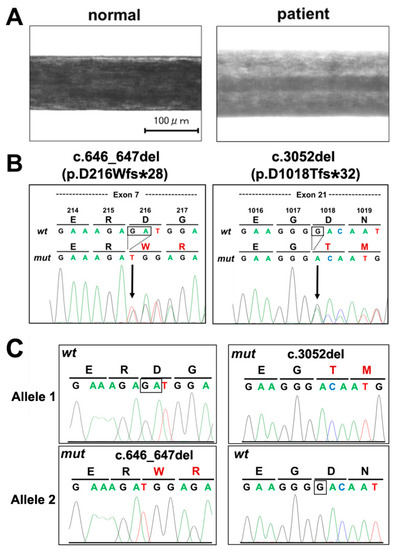