Isabel B. Schmidt
6 and

Brazil has recently (2014) changed from a zero-fire policy to an Integrated Fire Management (IFM) program with the active use of prescribed burning (PB) in federal Protected Areas (PA) and Indigenous Territories (IT) of the Brazilian savanna (Cerrado). PB is commonly applied in the management of fire-prone ecosystems to mitigate large, high-intensity wildfires, the associated emissions, and high fire suppression costs. However, the effectiveness of such fire management in reducing large wildfires and emissions over Brazil remains mostly unevaluated. Here, we aim to fill the gap in the scientific evidence of the PB benefits by relying on the most up-to-date, satellite-derived fire datasets of burned area (BA), fire size, duration, emissions, and intensity from 2003 to 2018. We focused on two Cerrado ITs with different sizes and hydrological regimes, Xerente and Araguaia, where IFM has been in place since 2015. To understand fire regime dynamics, we divided the study period into three phases according to the prevalent fire policy and the individual fire scars into four size classes. We considered two fire seasons: management fire season (MFS, which goes from rainy to mid-dry season, when PBs are undertaken) and wildfires season (WFS, when PBs are not performed and fires tend to grow out of control). Our results show that the implementation of the IFM program was responsible for a decrease of the areas affected by high fire recurrence in Xerente and Araguaia, when compared with the Zero Fire Phase (2008–2013). In both regions, PB effectively reduced the large wildfires occurrence, the number of medium and large scars, fire intensity, and emissions, changing the prevalent fire season from the WFS to the MFS. Such reductions are significant since WFS causes higher negative impacts on biodiversity conservation and higher greenhouse gas emissions. We conclude that the effect on wildfires can still be reduced if effective fire management policies, including PB, continue to be implemented during the coming decades. View Full-Text
Keywords: fire management; fire policy; remote sensing; burned area; scar size; savanna fire management; fire policy; remote sensing; burned area; scar size; savanna
►▼ Show Figures 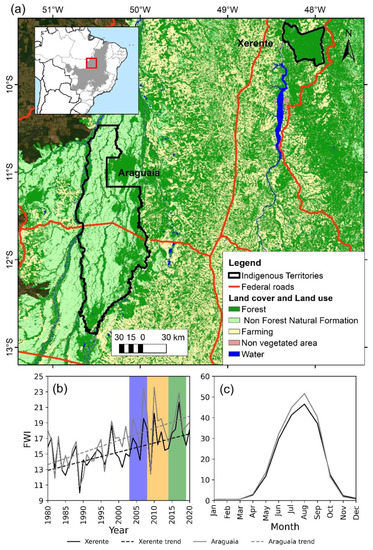