How Much Does Fire Behavior of Leaf Litter Beds Change within Two Months?

Fire behavior is well-recognized as a function of fuel characteristics, but in practice the dynamics of fuels are often overlooked. Here we focus on short term changes in the fuel bed structure and fire behavior. Fire behavior and structural characteristics of leaf litter beds of Pinus halepensis, Ceratonia silique, and Quercus pubescens were examined. Three treatments were applied: testing freshly constructed samples (treatment “0”), exposure to a simulated precipitation event (treatment ”10”), and a two-month exposure to outside weather conditions (treatment “60”). The testing procedure allowed fire behavior testing without disturbing sample structure. Out of the tested species P. halepensis was most affected by the treatments, followed by Q. pubescens. C. silique showed no significant treatment effects. Response to the treatments could be attributed to pore space within the fuel bed, with more pore space relating to more dramatic treatment effects. In the treatment “0” P. halepensis and C. silique exhibited opposing fire behavior, but showed no significant differences in the treatment “60”. The measured effects show that short-term alterations in the fuel bed structure and fire behavior can be substantial, making it an issue that should be addressed in future research. View Full-Text
Keywords: flammability; fuel bed; fuel dynamics; leaf litter; seasonality flammability; fuel bed; fuel dynamics; leaf litter; seasonality
►▼ Show Figures 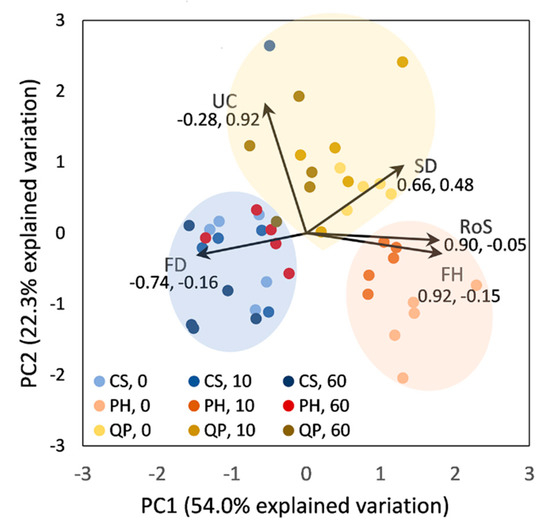