In this study, a Large Eddy Simulation (LES) based fire field model was applied to numerically investigate the effectiveness of smoke control using smoke vents and curtains within a large-scale atrium fire. Two compartment configurations were considered: the first case with no smoke curtains installed, while the second case included a smoke curtain at the centre of the compartment to trap smoke. Based on the thermocouple results, it was found that the model predicted the gas temperature near the fire particularly well. The time development and heat transfer of the gas temperature predictions were in good agreement with the experimental measurements. Nevertheless, the gas temperature was slightly under-predicted when the thermocouple was further away from the flaming region. Overall, it was discovered that the combination of a smoke curtain and ceiling vents was a highly effective natural smoke exhaust system. However, under the same vent configuration, if the smoke curtain height is not adequate to completely block the spread of smoke, it significantly reduces the pressure differential between the compartment and the exterior, causing reduced flow rates in the outlet vents. View Full-Text
Keywords: large eddy simulation; smoke curtain; computational fluid dynamics; smoke control; natural ventilation large eddy simulation; smoke curtain; computational fluid dynamics; smoke control; natural ventilation
►▼ Show Figures 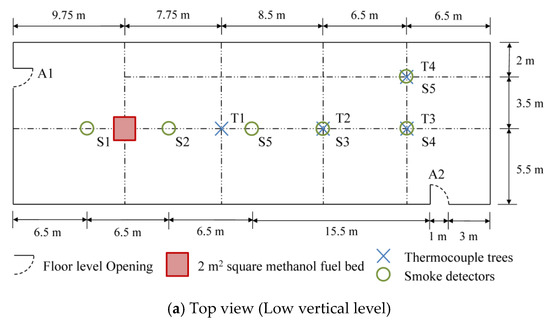