The Tasmanian Wilderness World Heritage Area (TWWHA) has globally significant natural and cultural values, some of which are dependent on the absence of fire or the presence of particular fire regimes. Planned burning is currently used to reduce the risk of loss of world heritage values from unplanned fires, but large and damaging fires still occur, with lightning as the primary ignition source. Lightning-caused fire was rare in the TWWHA before 2000. There has since been an increase in both the number of fires following lightning storms and the area burnt by these fires. In the absence of a direct measurement of lightning strike incidence, we tested whether changes in rainfall, soil dryness and fuel load were responsible for these changes in fire incidence and extent. There were no relationships between these variables and the incidence of fires associated with lightning, but the variability in the Soil Dryness Index and the mean of 25% of driest values did predict both the number and area of fires. Thus, it appears that an increase in the proportion of lightning strikes that occur in dry conditions has increased ignition efficiency. These changes have important implications for the management of the TWWHA’s values, as higher projected fuel loads and drier climates could result in a further increase in the number of fires associated with lightning. View Full-Text
Keywords: lightning; fire; Tasmanian Wilderness World Heritage Area; climate change lightning; fire; Tasmanian Wilderness World Heritage Area; climate change
►▼ Show Figures 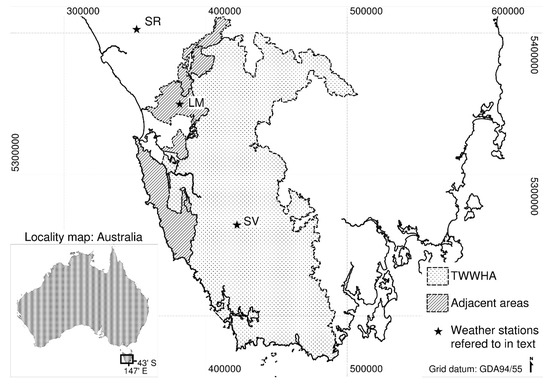