Paleoamerican Occupation, Stone Tools from the Cueva del Medio, and Considerations for the Late Pleistocene Archaeology in Southern South America

Last Interglacial Climate in Northern Sweden—Insights from a Speleothem Record

Continental records with absolute dates of the timing and progression of climatic conditions during the Last Interglacial (LIG) from northern Europe are rare. Speleothems from northern Europe have a large potential as archives for LIG environmental conditions since they were formed in sheltered environments and may be preserved beneath ice sheets. Here, we present δ13C and δ18O values from speleothem Kf-21, from Korallgrottan in Jämtland (northwest Sweden). Kf-21 is dated with five MC-ICPMS U-Th dates with errors smaller than ~1 ka. Kf-21 started forming at ~130.2 ka and the main growth phase with relatively constant growth rates lasted from 127.3 ka to 124.4 ka, after which calcite formation ceased. Both δ13C and δ18O show rapid shifts but also trends, with a range of values within their Holocene counterparts from Korallgrottan. Our results indicate an early onset of the LIG in northern Europe with ice-free conditions at ~130 ka. Higher growth rates combined with more negative δ18O values between ~127.3 and 126.8 ka, interpreted here as warmer and more humid conditions, as well as indications of a millennial-scale cold spell centered at 126.2 ka, resemble findings from speleothem records from other parts of Europe, highlighting that these were regional scale climatic patterns. View Full-Text
Keywords: Last Interglacial (LIG); speleothem; stable carbon and oxygen isotope compositions; climate variability; Scandinavia; Sweden Last Interglacial (LIG); speleothem; stable carbon and oxygen isotope compositions; climate variability; Scandinavia; Sweden
►▼ Show Figures 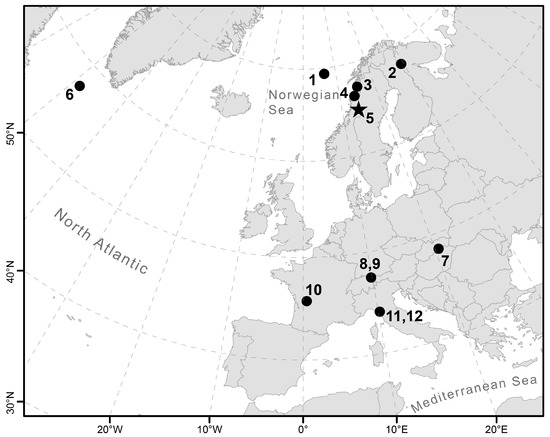