Acrylonitrile–Butadiene–Styrene (ABS) is a very significant and widely used amorphous thermoplastic that possesses high impact resistance, toughness, and heat resistance. Bending collapse is a predominant failure of polymeric structural members in the vehicle environment under angled and unsymmetrical collisions. Therefore, it becomes critical to investigate the flexural behavior of the ABS beam and find its energy absorption capabilities under a transverse loading scenario. Four-point bending tests were carried out at different strain rates and at two different span lengths to investigate the deformation behavior of ABS. This paper examines the influence of strain rate, friction coefficient, Generalized Incremental Stress-State MOdel (GISSMO) and Damage Initiation and Evolution (DIEM) damage models, yield surfaces, and the span length on the four-point flexural behavior of the ABS polymeric material. A Semi-Analytical material model (SAMP_1) in LSDYNA was utilized to numerically evaluate the behavior of ABS under four-point bending. From extensive investigative explorations, it was found that the flexural behavior of ABS is dependent upon the span length, loading strain rate, and friction coefficient between the specimen and the supports. The modeling of damage was successfully exemplified by using the inherent damage law of the SAMP-1 material model, GISSMO, and DIEM damage formulations. View Full-Text
Keywords: four-point method; GISSMO; DIEM; SAMP-1 four-point method; GISSMO; DIEM; SAMP-1
►▼ Show Figures 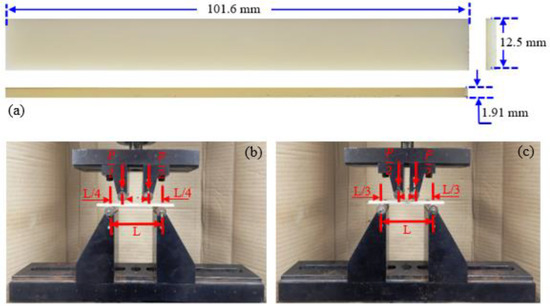