Hand scraping is a manual metalworking method that is still used in many industries to obtain good planarity, low friction and good gliding properties of metal and plastic surfaces. However, it is characterized by low productivity and requires skilled and well-trained workers. This macroanalysis focuses on the strategy and procedure of the workers during the scraping operation. Forces and tool positions were acquired simultaneously and the resulting surfaces were measured after each scraping pass. Results show that in most instances differences between individual workers’ scraping styles are more significant than between consecutive scraping passes. This research was conducted in order to gather sufficient insight into the hand scraping method to take steps towards its automation.
Keywords: hand scraping; scraping; macroanalysis hand scraping; scraping; macroanalysis

Hand scraping is a manual metal working process, which is carried out by the use of simple cutting tools or dedicated power tools. The method is based on chip removal with geometrically defined cutting edges as opposed to other finishing processes like grinding, lapping or electromachining. Differently to these methods, the goal is not to achieve an even surface but rather an intended waviness. It has been deployed for surface finishing purposes for many decades, was mentioned in the 19th century [1] and described in detail in 1917 by Oberg and Jones [2].
Although the method has been replaced in many of its original applications by machining processes or alternative technical solutions, it is still in use to date in different industries (like machine tool manufacturing or plant construction) due to the properties of its surfaces. Its typical applications are flat tracks (specifically in precision machine tools or large gate valves), plain bearings and machine tables. Moreover, the method is frequently used in reworking operations for machine tools [3]. The purpose of hand scraping usually is to provide very good planarity as well as improved lubrication. These properties derive from the specific hand scraping procedure and the wavy surface. However, this aspect has only been scarcely investigated by research groups. Tsutsumi et al. showed that scraped surfaces can significantly enhance the behavior of flat tracks during motion by minimizing the wedge effect and improving the pressure distribution and thus enhance the precision of the machine tool [4]. However, they did not find an improvement of the frictional behavior by hand scraping. Similar results were found by Hou et al. [5] who compared the tribological behavior of two differently scraped slideways. Although there are different scraping methods and textures (like “flaking”), no scientific investigation seems to have taken place regarding this topic. Furthermore, no comparison to the tribological properties of other textured surfaces (as investigated by Yue et al. [6] and other research groups) seems to have been implemented yet.
As mentioned before, hand scraping has been replaced by other processes over the last decades, such as milling and grinding machines, which have become more precise and can achieve better planarity values. Moreover, flat tracks have in many applications been replaced by linear rolling element bearings. One other reason is that hand scraping requires experienced and well-trained workers and long working durations per workpiece, which in combination lead to high cost. Ito [7] describes different aspects of the replacement of hand scraping by alternative technologies. However, no method is able to replace all beneficial properties of hand scraping. Thus, automated scraping could provide added value for the industries mentioned above.
Due to its decreasing industrial importance, hand scraping has received only little attention by research groups. Schmid [3] gives a broad overview over the topic in the German language describing tools and the different (Western) variants of scraping. Fuji et al. [8] provide an exhaustive insight into the motion patterns and cutting forces occurring in an Japanese scraping style, named “kisage”. A respective investigation on the Western scraping style was presented by Oßwald et al. [9] in a so called microanalysis. However, no research has been conducted yet on the processing strategy and procedure that workers use to work a surface. This so-called macroanalysis is the focus of the research presented here.
Many hand scraping operations were facilitated with the introduction of specialized power tools (by companies like Biax or Renz). However, an automated system has not yet been made commercially available although a number of research groups have made efforts in this respect. Publications that deal with the automation of hand scraping mainly cover two areas: the characterization of the workpiece surface and the mechanical execution of the process.
Characterizing the workpiece surface is a key aspect that traditionally has been addressed by rubbing of the workpiece on a flat surface that has been coated with blueing compound. This method unveils areas of high points of the workpiece and thus areas that have to be further worked. This concept was implemented for automation by several research groups and transferred into a task of an automated camera-based system [10,11]. An alternative approach was taken by Hsieh et al. [12] who used a scanning triangulation sensor to obtain a model of the workpiece surface.
Other important components of automated scraping are the positioning and the actuation of the tool. Lin et al. [11] developed a gantry positioning system that also serves for actuating the tool. Two scraping approaches (“chess board pattern” and “dense pattern”) were imitated by the system and the results were characterized. A similar system has been presented by Tsutsumi et al. [13] who also developed a software functionality for adaptive machining of the workpiece. Other approaches include the use of CNC milling machine tools that were equipped with an actuator for the scraping strokes by Hsieh et al. [14]. Using two additional axes for the actuation of the tool they were able to generate different shapes of scraping marks.
The purpose of this research is to develop an in-depth understanding of the scraping process in order to facilitate the development of future automated scraping systems.

Hand scraping can be characterized as similar to other cutting processes that are based on chip removal with geometrically defined cutting edges. Following ISO 3002 as the relevant standard, the most important directions, angles and forces are depicted in Figure 1.
In order to simultaneously acquire forces, positions and angles during scraping a special test stand was used as introduced in [9]. Apart from the camera, the setup is shown in Figure 2. The workpiece (1) is directly mounted to the dynamometer (3). The scraping tool is equipped with a specific color pattern (2) that is recognized and followed using images of the camera as well as an inertial measurement unit (IMU) (4) that measures accelerations and angles. To implement synchronization of the camera with the measurement of the other quantities, three light emitting diodes (LEDs) are included into the setup. Table 1 lists the main components of the test stand and their main specifications.
A 100 × 100 mm block (c.f. Figure 2) of cast iron (EN-GJL-250/0.6025) served as a workpiece. This material is commonly used for machine beds and is therefore relevant for scraping applications. For the purpose of taking into account the influence of the individual worker on the results of hand scraping, two experienced workers were scraping their individual workpiece and consequently, all measurements were acquired twice. In order to ensure the personal privacy of the workers, they will be named worker “J” and worker “S” in this article. Both workers were asked to scrape a flat surface in the manner and quality they normally work components for flat guides in machine tools.
The density of bearing points (in many cases related to a field of 25 × 25 mm or defined as “points per inch”, PPI) is a common measure for the evaluation of scraped surfaces [3]. It is usually obtained by counting high points on the surface that previously was rubbed on blueing compound as described above.
For the three-dimensional measurements of the scraped surfaces an optical profilometer (manufacturer: FRT, type: MicroSpy) was utilized. The obtained data was analyzed in the form of images, surface parameters (Sa and Sz) as well as material ratio curves. Additionally, characteristic values of the material ratio curves were calculated according to ISO 25178 [15] as depicted in Figure 3.
As shown in [9], hand scraping is usually executed in individual rows as sequences of scraping strokes. Usually, the cutting direction takes place in an angle directional φ of 30° to 45° to the workpiece edge. Consequently, one pass consists of a number of scraping strokes. It is usually followed by a second pass with a negative directional angle before the workpiece is deburred and rubbed with blueing compound on an even surface to identify the high points and conclude which areas still need to be scraped. In the following, these two passes are counted as pass 1a, pass 1b and so forth.

In conclusion, it appears that in most instances differences between individual workers’ scraping styles are more significant than between consecutive scraping passes. Individual worker scraping styles result in significant differences in cutting forces and surface topologies. Presumably, the depth of the scraped surface is less important to the tribological properties than the contact area ratio or the number of bearing points per area. However, this has not been shown empirically, yet. Thus, future research should cover the dependencies of characteristics of scraped surfaces and their tribological effects.
Future research on hand scraping should also cover the aspect of its effects on the workpiece surface. This topic has recently been discussed as “surface modifications” [17]. It is well known that the significant plastic deformation caused by cutting processes results in effects like work hardening and residual stresses [18] that affect the functionality and wear resistance of the workpieces. These effects are presumably different for hand scraping, scraping with power tools and (future) automated scraping and therefore should be investigated for all versions of the process.
The findings concerning the “working strategies” and the resulting surfaces in this macroanalysis, combined with the insights on cutting forces and tool movement patterns obtained by a microanalysis [9], provide the knowledge base for the design and the parameter windows of future automated scraping systems.

Conceptualization, K.O. and I.L.; software, I.L.; formal analysis, J.C.G.; writing K.O. All authors have read and agreed to the published version of the manuscript.

Authors would like to thank Kunzmann Fräsmaschinen for supporting this research—specifically worker “J” and worker “S”—as well as Michael Kirstein and Michael Oefelein. 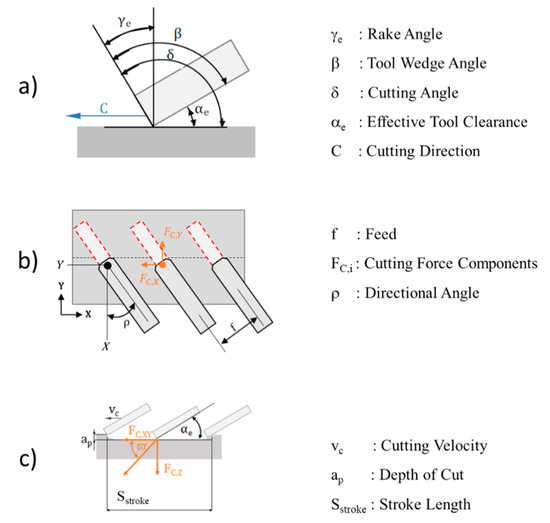 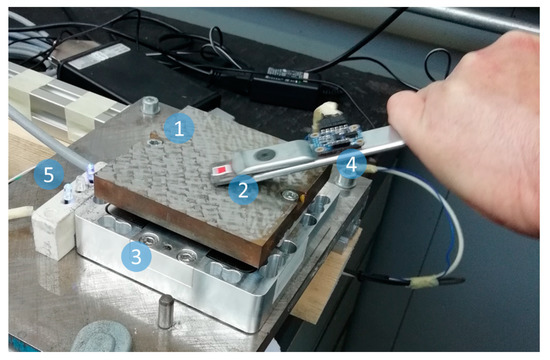 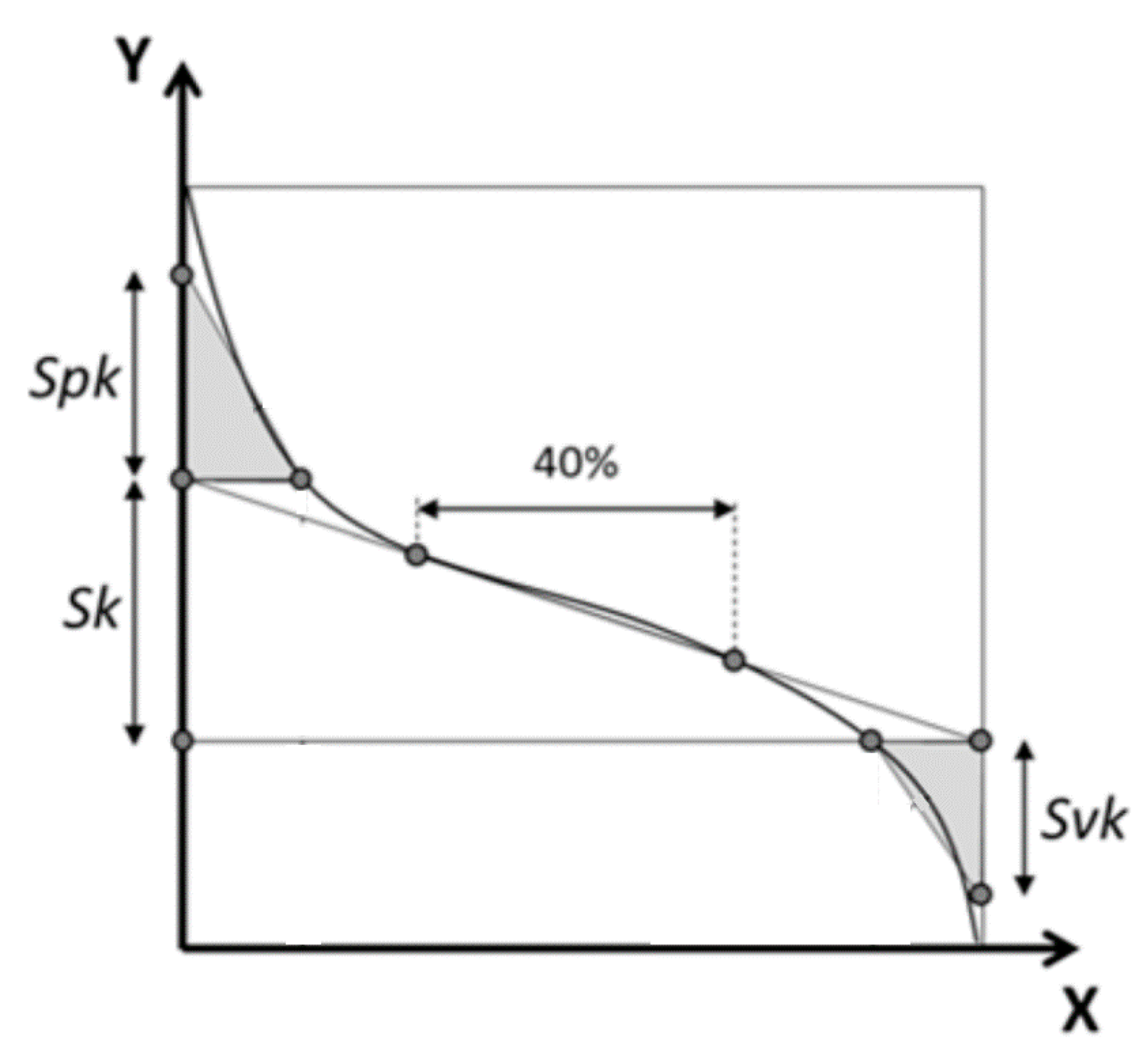 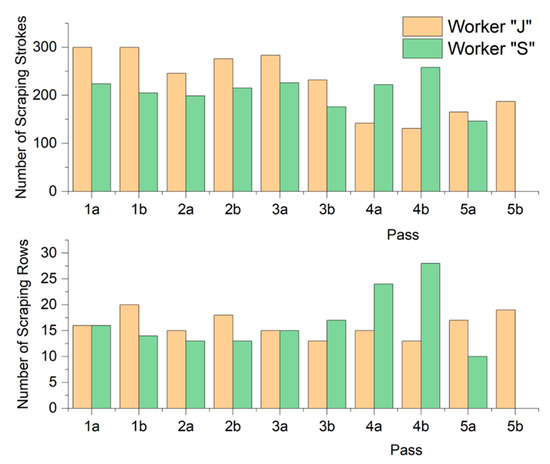 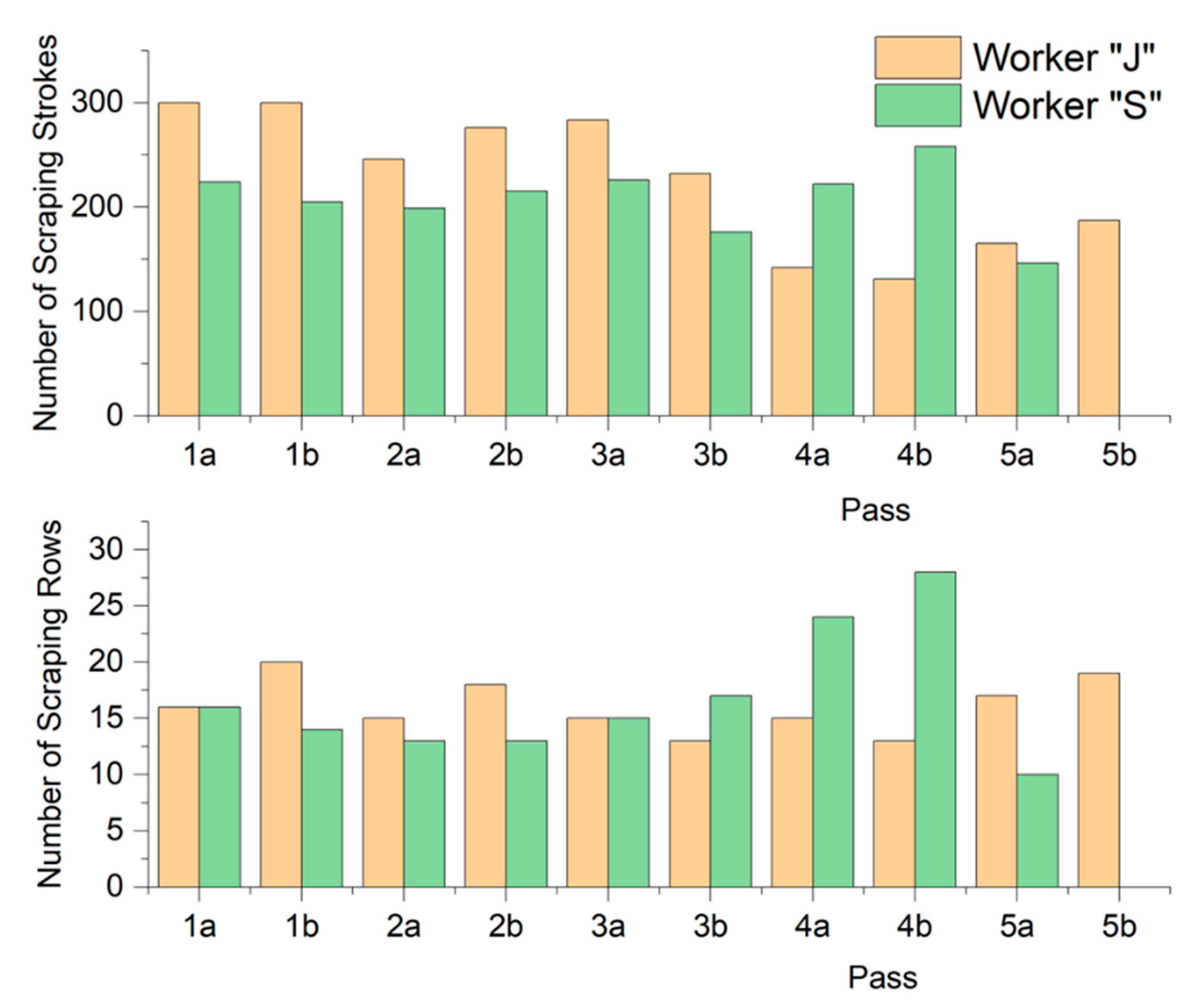 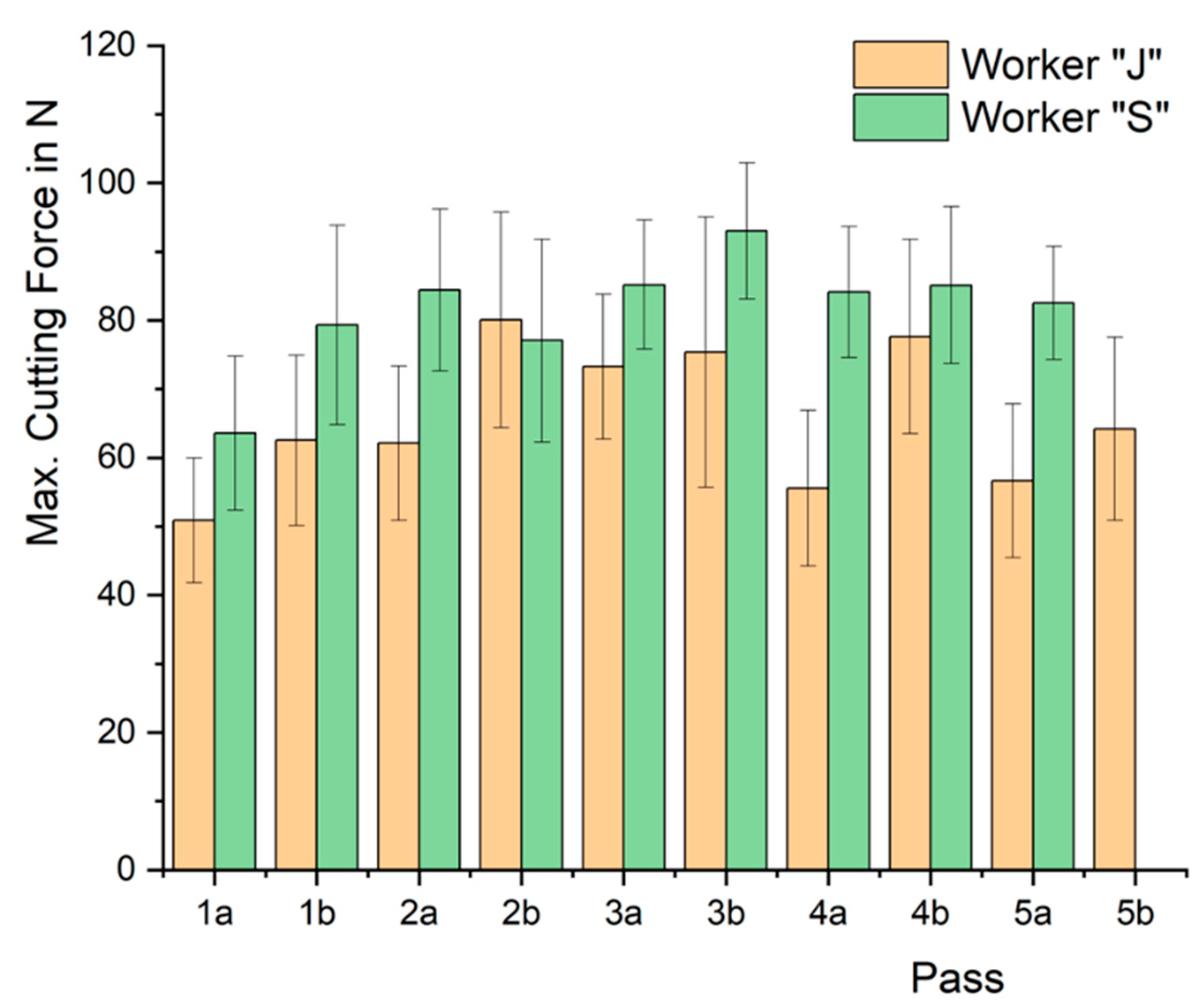 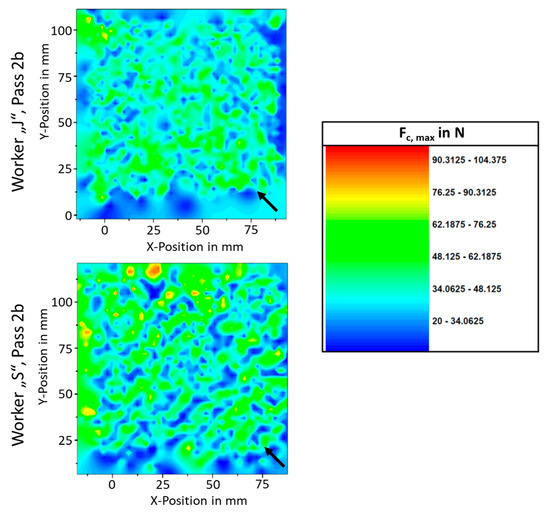 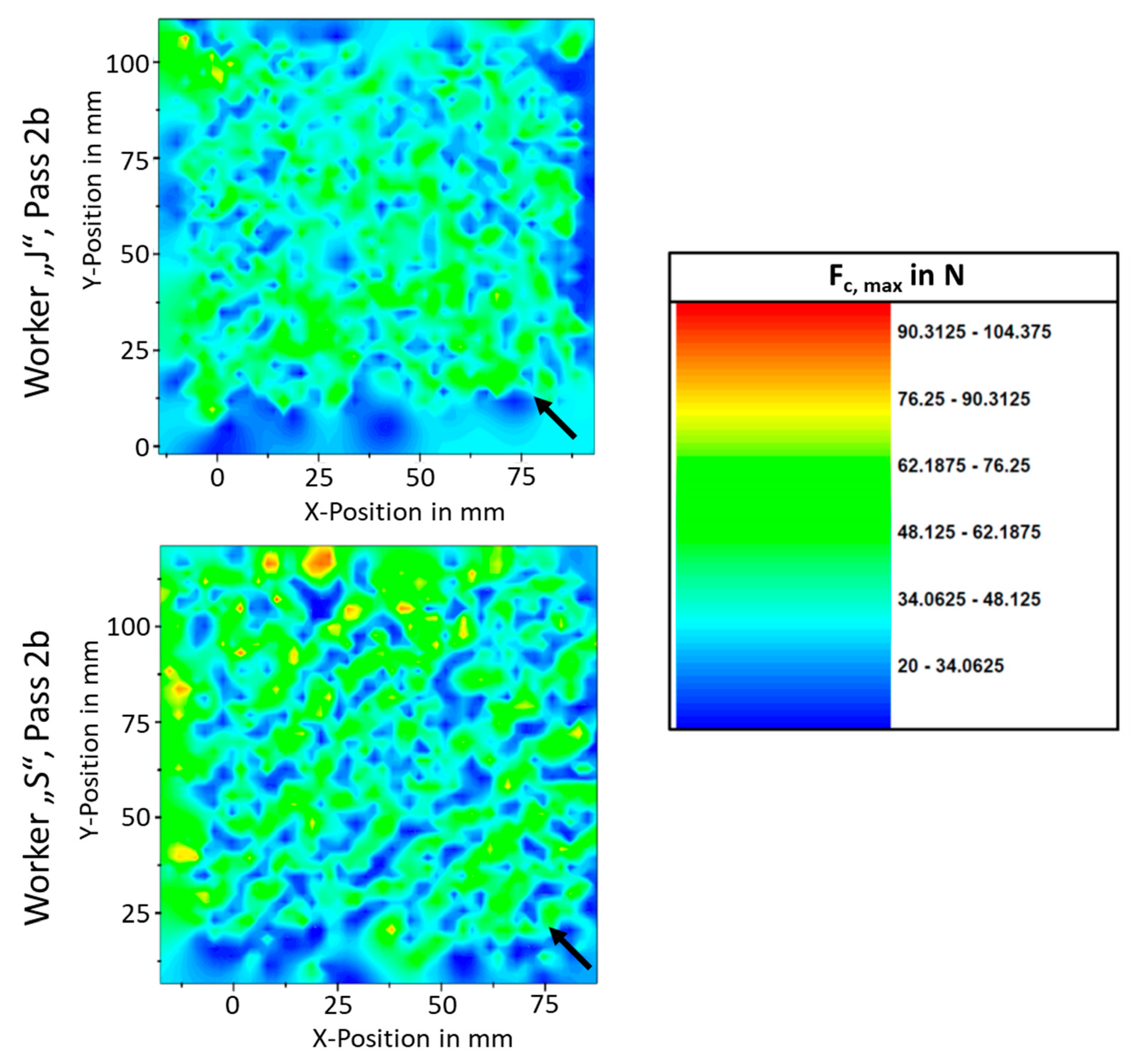 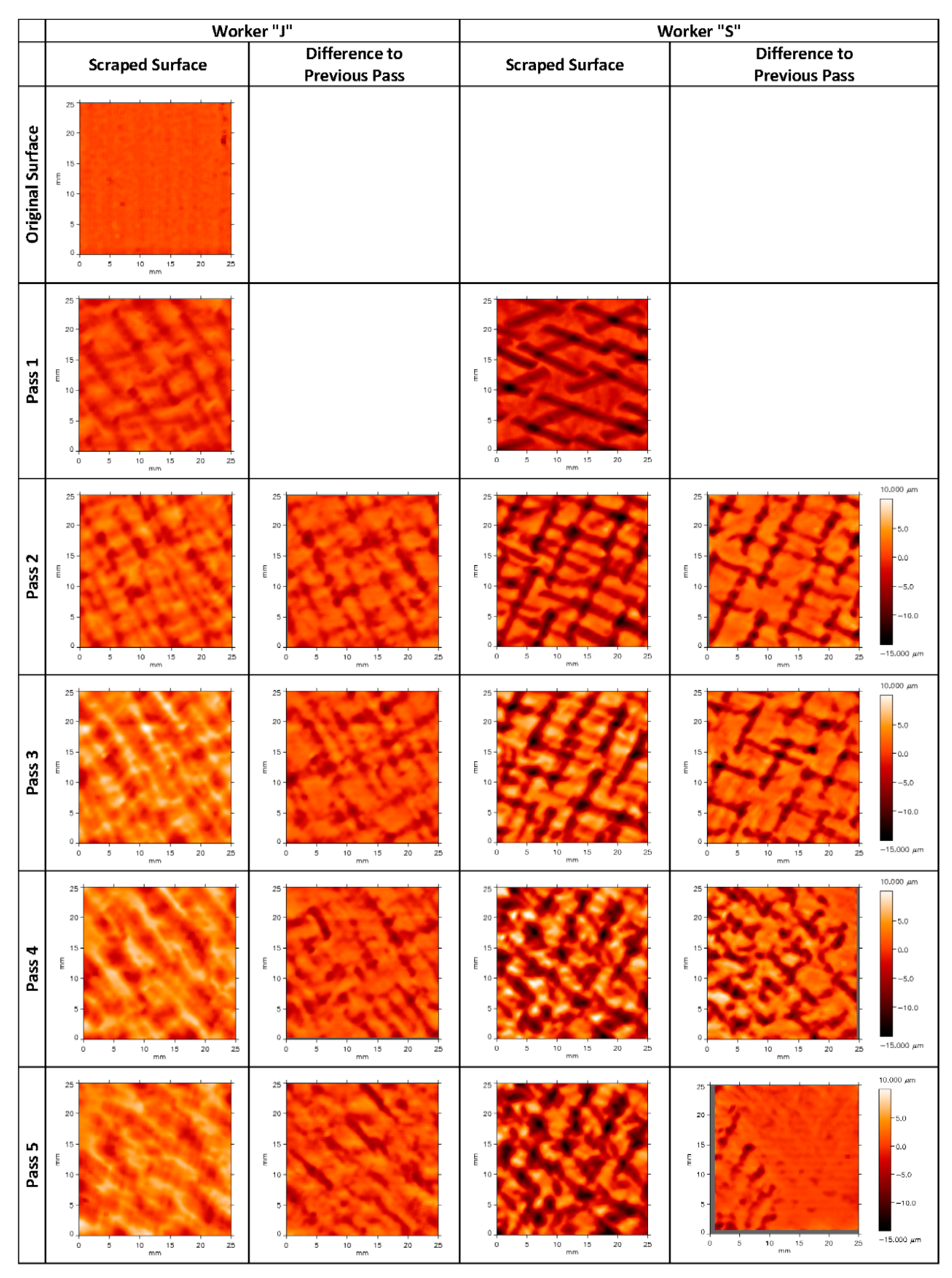