2.1. Hot Stamping Having Simultaneous Heating of Next Blank with the Die Quenching

Non-coated 22MnB5 steel sheets are bent into hat-shapes in hot stamping using direct resistance heating to investigate the effects of the resistance heating conditions on hardening behaviour in hot stamping. The details of the used electrodes and dies in the experiment are shown in Figure 3 and Figure 4, respectively. The equipment for resistance heating and the bending dies were installed in a 1500 kN CNC servo press. A typical uncoated quenchable steel sheet non-coated 22MnB5 having 1.6 mm in thickness was used for the experiment. The length, width and thickness of the 22MnB5 sheet were 155, 90 and 1.6 mm, respectively, and the heating temperature was 900 °C.
Both ends of the steel sheet in the longitudinal direction were sandwiched between the chromium copper electrode and the stainless-steel holder under a pressure of 1.4 MPa. The blank was heated by the passage of direct current for several seconds. To heat the sheet uniformly, flat copper braids were inserted at the interface between the electrode and the steel sheet to obtain the uniform distribution in electrical contact resistance as shown in Figure 3. The heated blank was released from the holder immediately after heating and was transferred to the hat-shaped bending dies with a pneumatic cylinder. The heated sheet was bent and die-quenched under the conditions of stamping shown in Table 1. Each experiment was performed three times to verify the repeatability of the experiments.
It is important to precisely measure the temperature of the blank in hot stamping. However, it is not easy to measure temperature in resistance hating because the electrical noise is significant for thermocouple, and emissivity changes with the growth of the oxide layer for infrared thermometers. In this study, the temperature was measured with a spot type infrared thermometer as shown in Figure 3. The centre portion of the lower surface of the blank was painted by a black body paint, the temperature was measured from the bottom, and feedforward-controlled current was utilised for the experiments. However, black body paint cannot be used in mass production, and it is not suitable for feedforward control. Therefore, it is desirable to measure temperature without contact even at changing emissivity. The two-colour thermometry system without emissivity calibration is suitable for hot stamping production with resistance heating [27].
The heating path and conditions of resistance heating used for the experiment are shown in Figure 5 and Table 2, respectively. The temperature of the blank increases almost linearly with the heating time. The heating rate v during the rise in temperature was adjusted with the current density. The target temperature of 900 °C was held between 0 and 5 s by the passage of low current.
An example of a hat-shaped bent part using direct resistance heating is shown in Figure 6. The heating condition is v = 275 °C/s and t = 0 s. A result using furnace heating at 900 °C for 240 s is also shown for comparison. The oxidation of resistance-heated one is remarkably small compared with that of furnace-heated one.

3. Effect of Heat Microstructure of Blank Sheet on Quenchability in Die Quenching

To investigate the effect of the microstructure of the blank sheet on the die-quenchability for v = 275 °C/s and t = 0 s as comparatively short heating time, normalise and anneal heat treatment were performed before hot stamping. Then, the heat-treated sheets were resistance-heated, stamped, and quenched for the experiments. The heating path used for the heat treatment and the microstructures of the as-received, normalised and annealed sheets before hot stamping are shown in Figure 7 and Figure 8, respectively. At first, the cut section was polished with emery paper to get a smooth mirror-like surface, and then it was lapped with alumina powder. The polished surface was etched with Nital solution. The optical microscope was utilised for observation. As illustrated in Figure 8, the dark areas show perlite and the light-grey areas show ferrite. All of the sheets in these experiments contain ferrite and perlite structures. The as-received sheet reveals the band structure due to cold rolling; however, the granular perlite with the precipitated ferrite is obtained from normalised sheet. The annealed sheet shows the band structure, because the manganese forms the band structure by rolling and carbon is also segregated according to the segregation of manganese. The grain size of the normalised sheet is considerably small, whereas that for the annealed sheet is large.
An effect of the heat treatment of the blank before hot stamping on Vickers hardness after die- and water-quenching using direct resistance heating for v = 275 °C/s and t = 0 s is shown in Figure 9. The die-quenched hardness of the as-received sheet using furnace heating of 240 s reaches 450 HV, whereas the die-quenched hardness of the as-received and annealed sheets using direct resistance heating reduce. Figure 10 illustrates the effect of heat treatment of blank on the distributions of Vickers hardness in thickness direction after die-quenching using direct resistance heating for v = 275 °C/s and t = 0 s. The hardness scatter of the normalised sheet becomes approximately steady in thickness direction, whereas it increases for the annealed sheet and decreases for the as-received one. The result of Figure 9 was arranged based on the grain size of the microstructure of the blank and is shown in Figure 11.
All heat-treated sheets have enough hardness in case of water quenching. Therefore, the quenchability of the sheet is a reason for insufficient hardness. The manganese and boron have a large effect on the quenchability. However, since the band structure was formed for as-received and annealed sheets as shown in Figure 8, it expects the segregation of manganese and boron near perlite and grain boundary. So, it is difficult to diffuse those to ferrite for short heating time, hence the low quenchability portion partially appears.
The microstructures of the die- and water-quenched sheets from as-received, normalised and annealed sheets for v = 275 °C/s and t = 0 s are shown in Figure 12. On the results of die quenching, ferrite is observed for as-received and annealed sheets. In particular, ferrite forms a thick layer in the result of the annealed sheet, corresponding to the microstructure shown in Figure 8c. As a result of water quenching, a small ferrite layer was observed for both the as-received and the annealed sheets. A full martensitic transformation occurred for the result from the normalised sheet even for the comparatively short heating time of direct resistance heating.

4. Full Hardening of Products by a Decrease in Heating Rate and by Temperature Holding in Hot Stamping Using Direct Resistance Heating

Hot stamping using direct resistance heating is attractive due to high and flexible productivity and low investment. Sufficient austenitisation is important even in a short heating time with rapid resistance heating to obtain the full hardening. Since the initial microstructure of the steel sheet affects the quenchability of the sheets, it is important to care for the microstructure of the blank such as band structures by rolling. The development of normalised steel sheets is suitable for rapid resistance heating. Since it is not difficult to normalise a steel sheet at material production, the use of that can be effective to reduce the heating time for austenitisation and to obtain high productivity. Full hardening was obtained, and the standard deviation of the hardness was reduced by holding at the austenitising temperature and the decrease in heating rate.

This work was supported by JSPS KAKENHI Grant Number 18H01749. 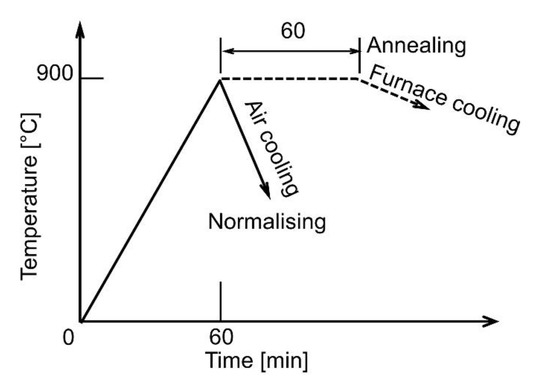 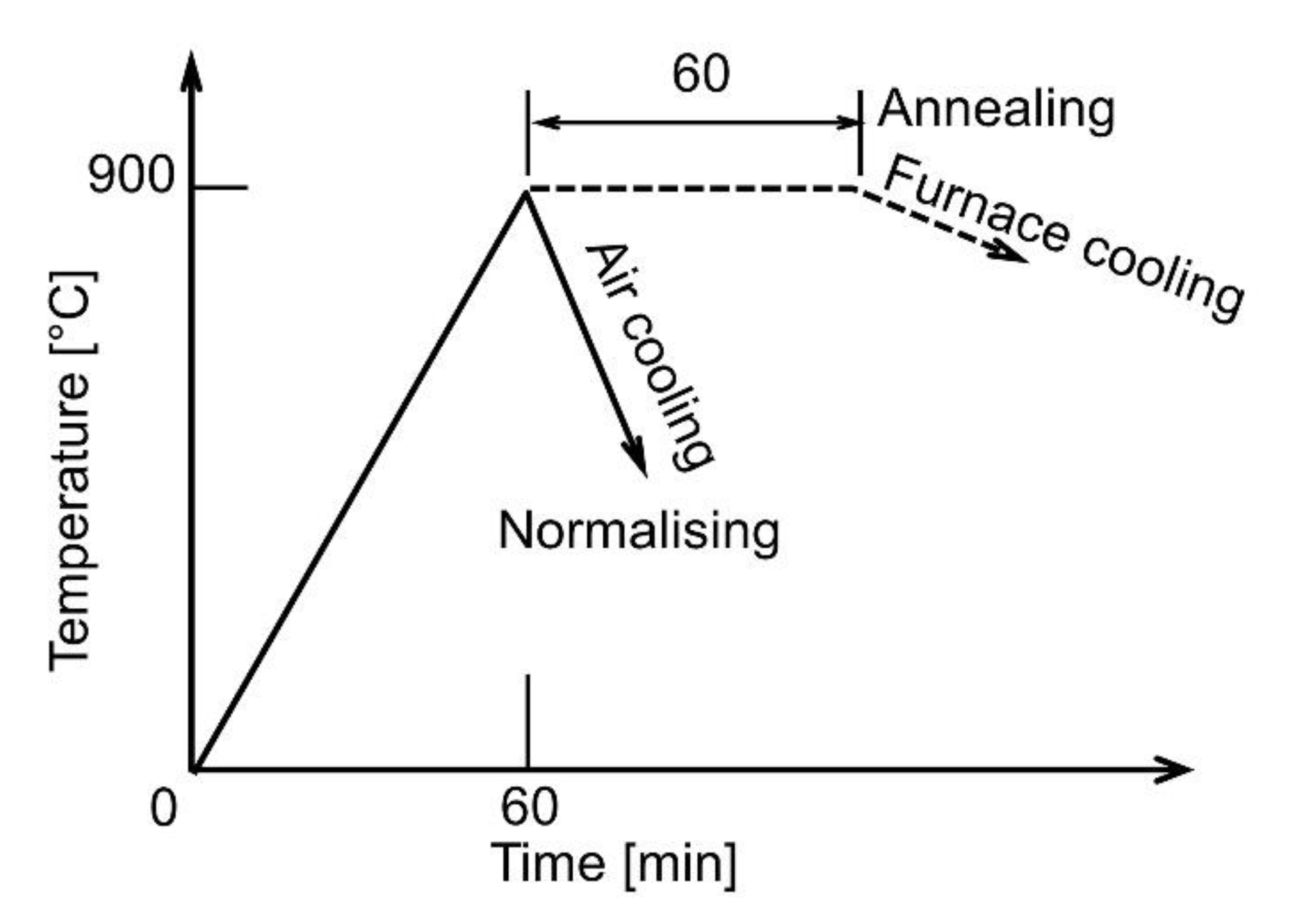 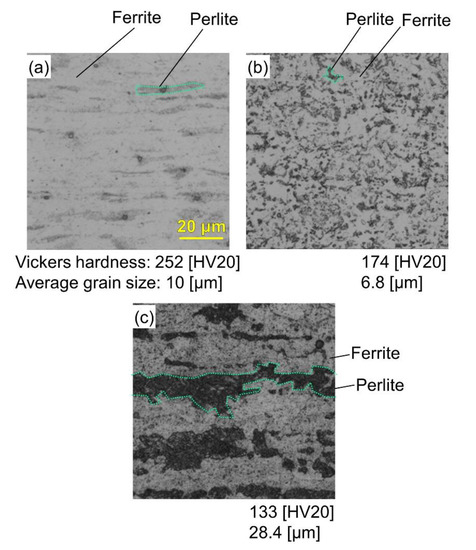 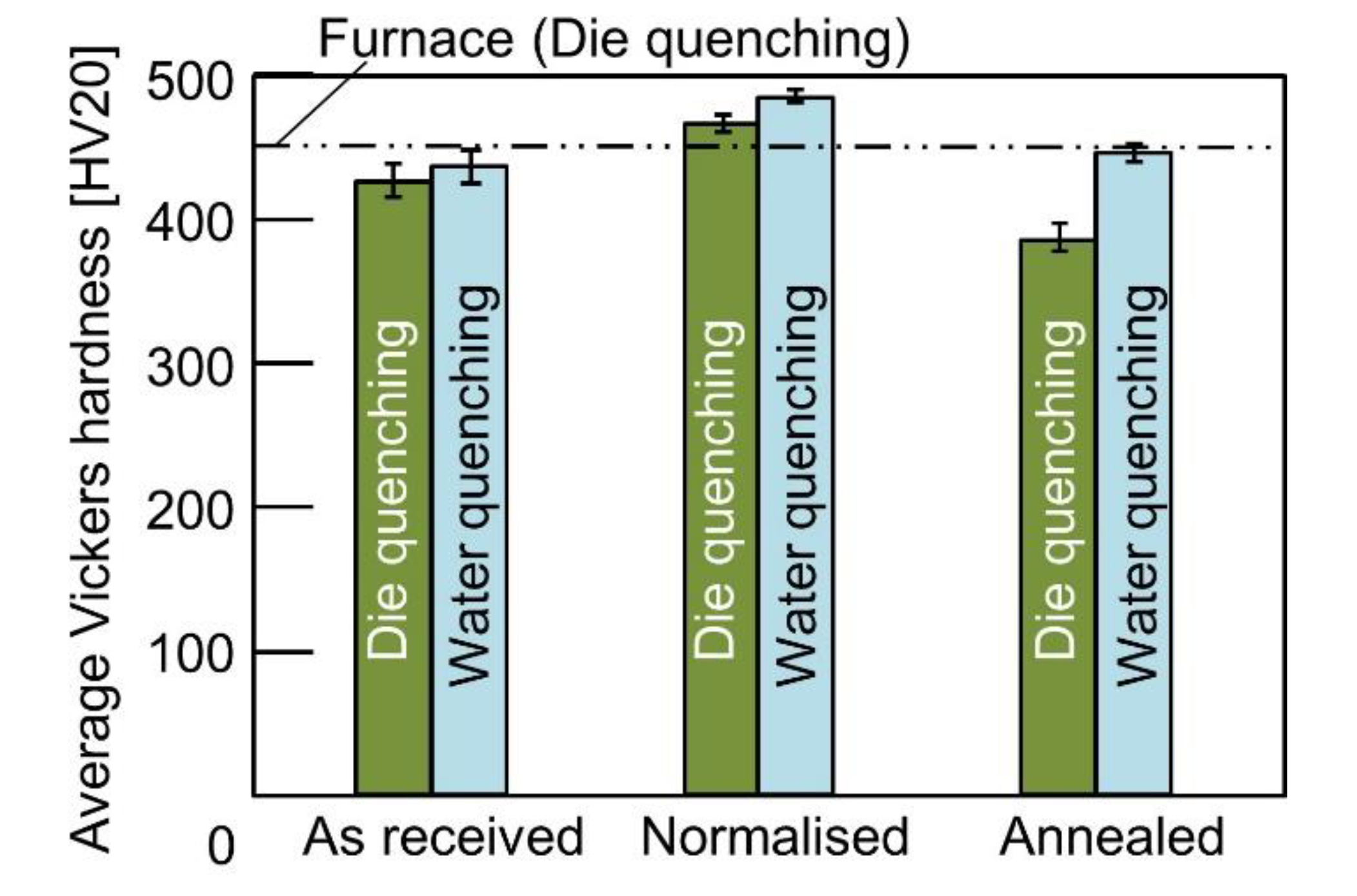 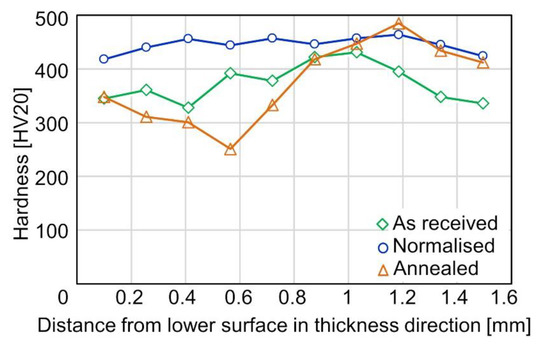 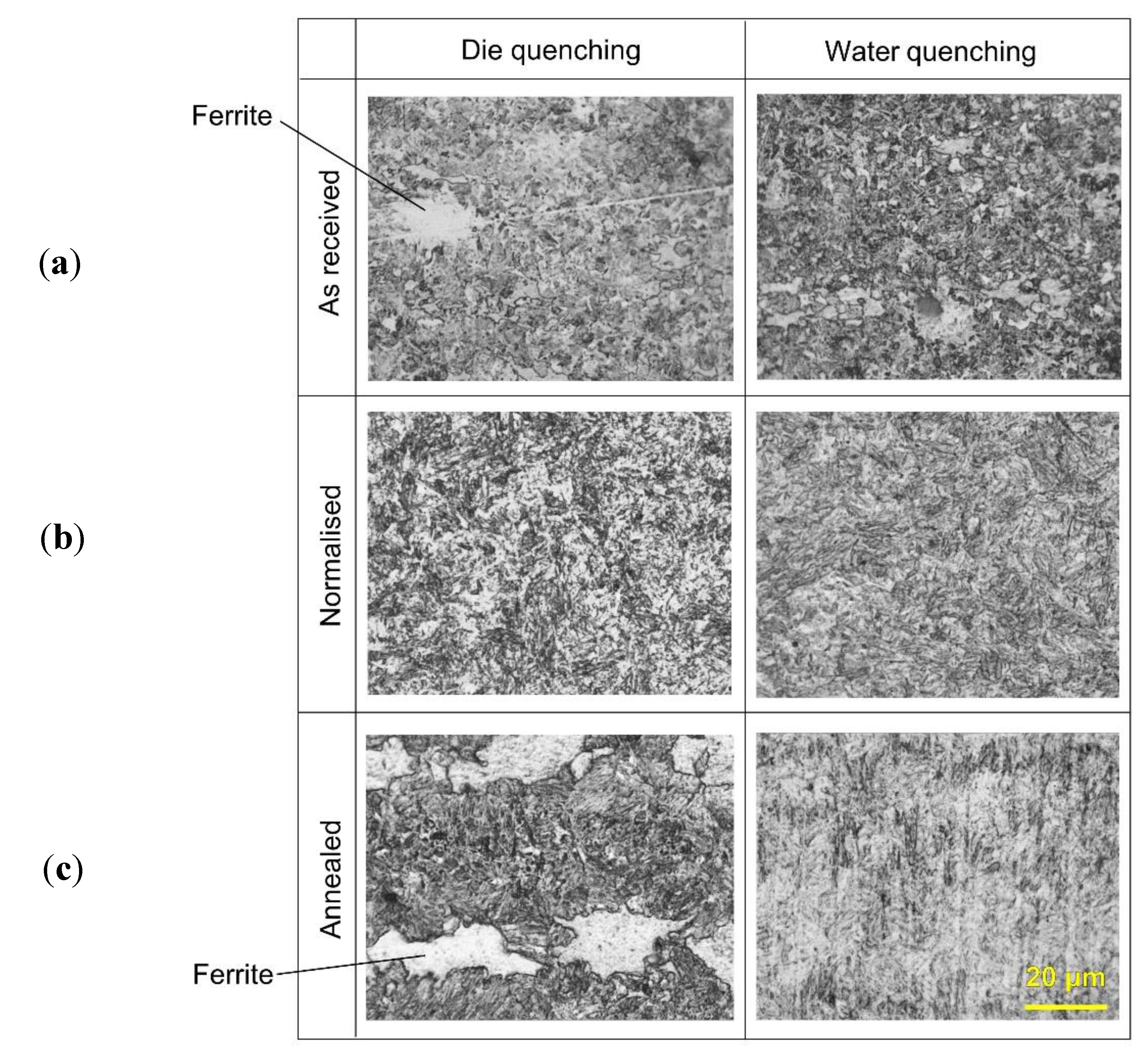 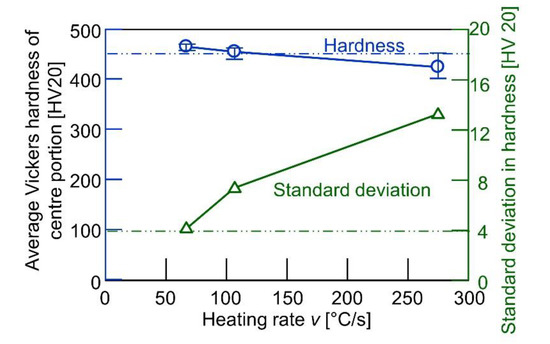 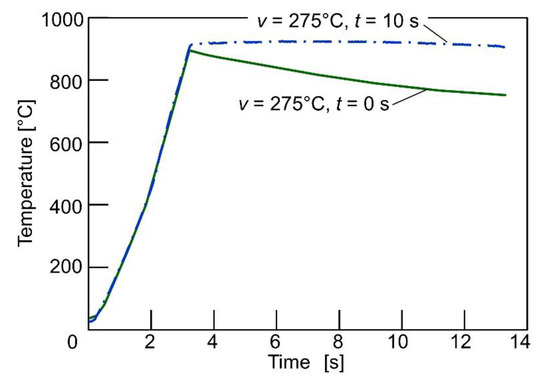 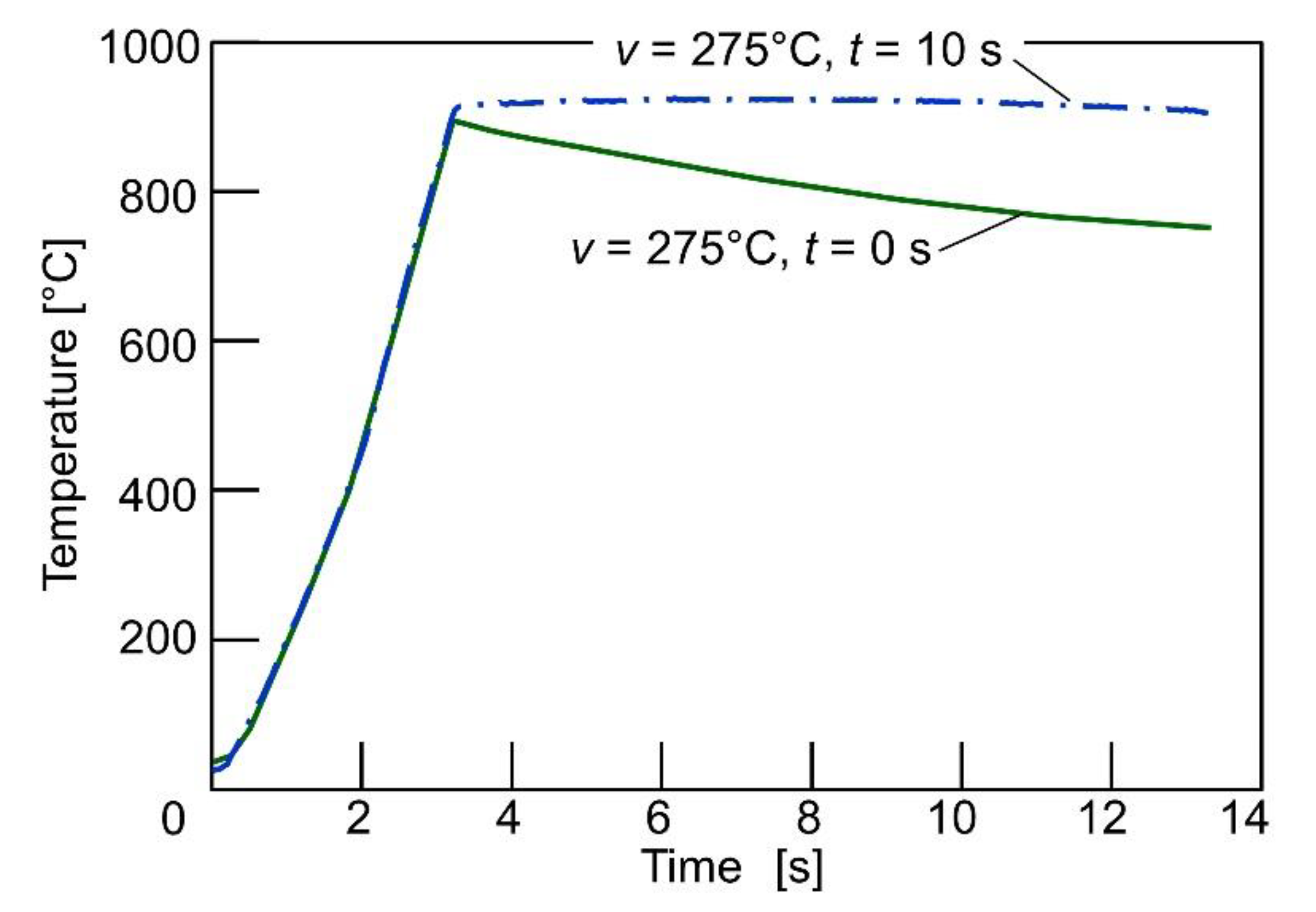 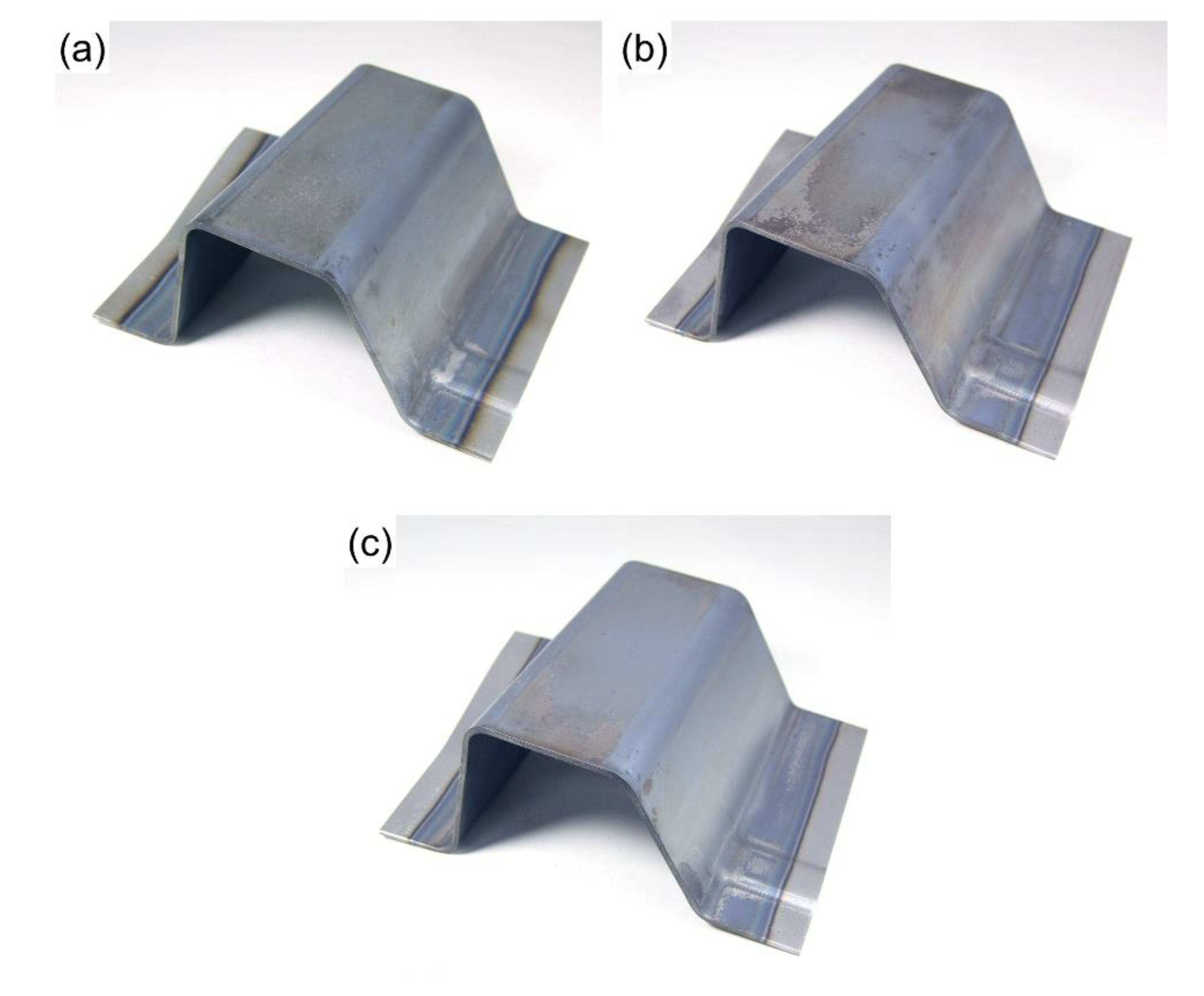 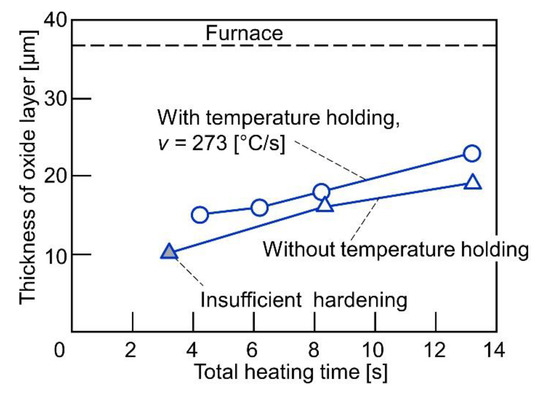