Fatal, Fulminant and Invasive Non-Typeable Haemophilus influenzae Infection in a Preterm Infant: A Re-Emerging Cause of Neonatal Sepsis
Next Article in Special Issue

From Colonial Research Spirit to Global Commitment: Bayer and African Sleeping Sickness in the Mirror of History
Previous Article in Journal / Special Issue

The twentieth century ended with human African trypanosomiasis (HAT) epidemics raging across many parts of Africa. Resistance to existing drugs was emerging, and many programs aiming to contain the disease had ground to a halt, given previous success against HAT and the competing priorities associated with other medical crises ravaging the continent. A series of dedicated interventions and the introduction of innovative routes to develop drugs, involving Product Development Partnerships, has led to a dramatic turnaround in the fight against HAT caused by Trypanosoma brucei gambiense. The World Health Organization have been able to optimize the use of existing tools to monitor and intervene in the disease. A promising new oral medication for stage 1 HAT, pafuramidine maleate, ultimately failed due to unforeseen toxicity issues. However, the clinical trials for this compound demonstrated the possibility of conducting such trials in the resource-poor settings of rural Africa. The Drugs for Neglected Disease initiative (DNDi), founded in 2003, has developed the first all oral therapy for both stage 1 and stage 2 HAT in fexinidazole. DNDi has also brought forward another oral therapy, acoziborole, potentially capable of curing both stage 1 and stage 2 disease in a single dosing. In this review article, we describe the remarkable successes in combating HAT through the twenty first century, bringing the prospect of the elimination of this disease into sight. View Full-Text
Keywords: human African trypanosomiasis; sleeping sickness; elimination; chemotherapy; fexinidazole; pafuramidine; acoziborole human African trypanosomiasis; sleeping sickness; elimination; chemotherapy; fexinidazole; pafuramidine; acoziborole
►▼ Show Figures 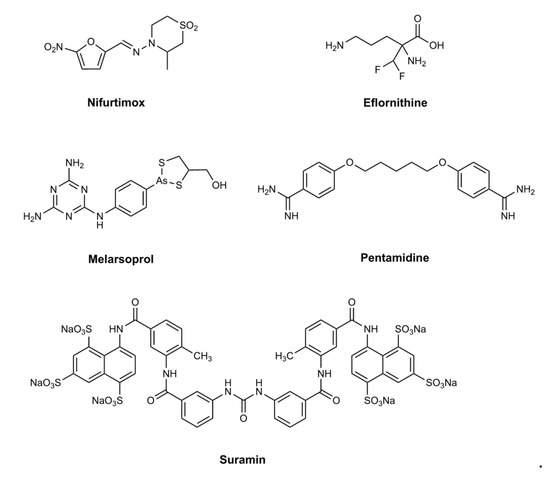