Spatial Heterogeneity and Temporal Trends in Malaria on the Thai–Myanmar Border (2012–2017): A Retrospective Observational Study

Malaria infections remain an important public health problem for the Thai–Myanmar border population, despite a plan for the elimination by the end of 2026 (Thailand) and 2030 (Myanmar). This study aimed to explore spatiotemporal patterns in Plasmodium falciparum and Plasmodium vivax incidence along the Thai–Myanmar border. Malaria cases among Thai citizens in 161 sub-districts in Thailand’s Kanchanaburi and Tak Provinces (2012–2017) were analyzed to assess the cluster areas and temporal trends. Based on reported incidence, 65.22% and 40.99% of the areas studied were seen to be at elimination levels for P. falciparum and P. vivax already, respectively. There were two clear clusters of malaria in the region: One in the northern part (Cluster I), and the other in the central part (Cluster II). In Cluster I, the malaria season exhibited two peaks, while there was only one peak seen for Cluster II. Malaria incidence decreased at a faster rate in Cluster I, with 5% and 4% reductions compared with 4% and 3% reductions in P. falciparum and P. vivax incidence per month, respectively, in Cluster II. The decreasing trends reflect the achievements of malaria control efforts on both sides of the Thai–Myanmar border. However, these clusters could act as reservoirs. Perhaps one of the main challenges facing elimination programs in this low transmission setting is maintaining a strong system for early diagnosis and treatment, even when malaria cases are very close to zero, whilst preventing re-importation of cases. View Full-Text
Keywords: spatial patterns; temporal trends; Plasmodium falciparum; Plasmodium vivax; Thai–Myanmar border spatial patterns; temporal trends; Plasmodium falciparum; Plasmodium vivax; Thai–Myanmar border
►▼ Show Figures 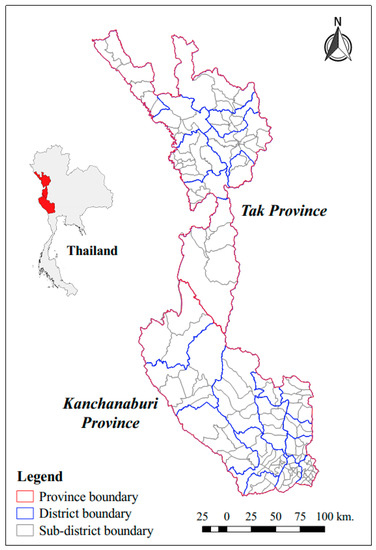