Cost of Caregivers for Treating Hospitalized Diarrheal Patients in Bangladesh

Introduction: Diarrheal diseases are a global public health problem and one of the leading causes of mortality, morbidity and economic loss. The objective of the study is to estimate the economic cost of caregivers and cost distribution per diarrheal episodes in Bangladesh. Methods: This was a cross-sectional hospital-based study conducted in public hospitals in Bangladesh. A total of 801 diarrheal patients were randomly selected and interviewed during January to December 2015. Simple descriptive statistics including frequencies, percentage, mean with 95% CI and median are presented. Results: The overall average cost of caregivers was BDT 2243 (US$ 28.58) while only BDT 259 (US$ 3.29) was spent as out of pocket payments. Caregivers mostly spent money (US$ 1.63) for food, lodging, utility bills, and other lump sum costs followed by the transportation costs (US$ 1.57). The caregivers spent more (US$ 44.45) when they accompanied the patients who were admitted in inpatients care and almost 3.6 times higher than for out-patients care (US$ 12.42). Conclusions: The study delivers an empirical evidence to the health-care programmers and policy makers about the economic cost of caregivers during diarrheal treatment care, which should be accounted for in designing future diarrheal prevention programme. View Full-Text
Keywords: caregiver; diarrheal disease; indirect cost; out of pocket payment; Bangladesh caregiver; diarrheal disease; indirect cost; out of pocket payment; Bangladesh
►▼ Show Figures 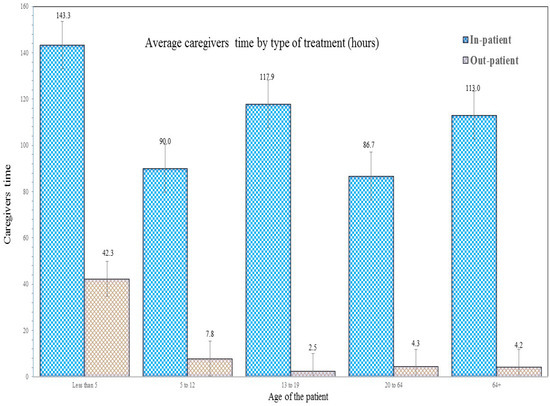