Paediatric Strongyloidiasis in Central Australia
Next Article in Special Issue

Spotted Fever Rickettsiosis in a Wildlife Researcher in Sabah, Malaysia: A Case Study

Scrub typhus threatens one billion people in the Asia-Pacific area and cases have emerged outside this region. It is caused by infection with any of the multitude of strains of the bacterium Orientia tsutsugamushi. A vaccine that affords heterologous protection and a commercially-available molecular diagnostic assay are lacking. Herein, we determined that the nucleotide and translated amino acid sequences of outer membrane protein A (OmpA) are highly conserved among 51 O. tsutsugamushi isolates. Molecular modeling revealed the predicted tertiary structure of O. tsutsugamushi OmpA to be very similar to that of the phylogenetically-related pathogen, Anaplasma phagocytophilum, including the location of a helix that contains residues functionally essential for A. phagocytophilum infection. PCR primers were developed that amplified ompA DNA from all O. tsutsugamushi strains, but not from negative control bacteria. Using these primers in quantitative PCR enabled sensitive detection and quantitation of O. tsutsugamushi ompA DNA from organs and blood of mice that had been experimentally infected with the Karp or Gilliam strains. The high degree of OmpA conservation among O. tsutsugamushi strains evidences its potential to serve as a molecular diagnostic target and justifies its consideration as a candidate for developing a broadly-protective scrub typhus vaccine. View Full-Text
Keywords: scrub typhus; Orientia tsutsugamushi; Rickettsia; Rickettsiales; outer membrane protein A; Anaplasma scrub typhus; Orientia tsutsugamushi; Rickettsia; Rickettsiales; outer membrane protein A; Anaplasma
►▼ Show Figures 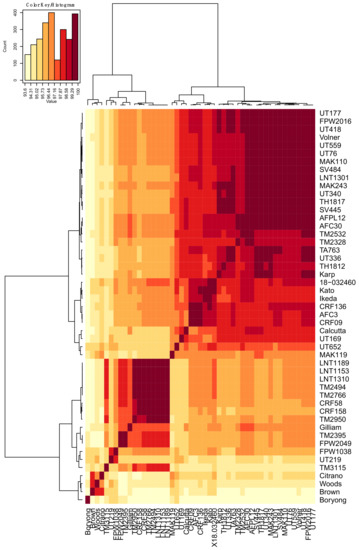