The Effect of Multiplayer Video Games on Incidental and Intentional L2 Vocabulary Learning: The Case of Among Us

Vocabulary learning has been traditionally considered central to second language learning. It may take place either intentionally, by means of deliberate attempts to commit factual information to memory, or incidentally, as a consequence of other cognitive processes involving comprehension. Video games, which have been extensively employed in educational contexts to understand lexical development in foreign languages, foster both exposure to and the production of authentic and meaning-focused vocabulary. An empirical study was conducted to explore the effect of playing an online multiplayer social deduction game (i.e., a game in which players attempt to uncover each other’s hidden role) on incidental and intentional second language (L2) vocabulary learning. Secondary school pre-intermediate English as a Foreign Language (EFL) students (n = 54) took a vocabulary pre-test that identified eight unknown words likely to appear in the video game Among Us. Then, students were randomly assigned to different groups of players and to different learning conditions—within each group, half of the players were given a list of phrases containing such target words, which they were encouraged to meaningfully use in the game by means of written interaction. In doing so, students learnt some target words intentionally and provided contextualized incidental exposure to other players. They took a vocabulary test after two sessions of practice with the game to explore intentional and incidental L2 vocabulary learning gains. The pre- and post-tests suggested, among other results, that players using new L2 words in the game Among Us would retain more vocabulary than players only encountering them, that vocabulary intentionally input helped other users trigger incidental vocabulary learning, and that repetition had a positive effect on L2 vocabulary learning. View Full-Text
Keywords: vocabulary learning; L2; foreign languages; video games; digital game-based learning vocabulary learning; L2; foreign languages; video games; digital game-based learning
►▼ Show Figures 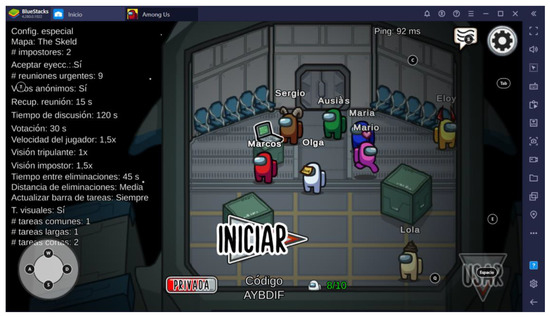 
Calvo-Ferrer JR, Belda-Medina J. The Effect of Multiplayer Video Games on Incidental and Intentional L2 Vocabulary Learning: The Case of Among Us. Multimodal Technologies and Interaction. 2021; 5(12):80. https://doi.org/10.3390/mti5120080


Calvo-Ferrer, José Ramón, and Jose Belda-Medina. 2021. "The Effect of Multiplayer Video Games on Incidental and Intentional L2 Vocabulary Learning: The Case of Among Us" Multimodal Technologies and Interaction 5, no. 12: 80. https://doi.org/10.3390/mti5120080