Over the last few years, Augmented Reality (AR) technology has quickly evolved and today there is commercial software and hardware that allow the creation of AR experiences. However, it might still be cumbersome to create rich AR experiences without a deep knowledge of the technology. Artists have collaborated with IT experts during the last few years in order to enhance artistic pieces embedding AR technology, leading to the emergence of interesting collaborations between artists and engineers, computer scientists, architects, etc. The resulting works can be referred as AR Art. However, the interdisciplinary work behind these collaborations is usually not addressed. The aim of this paper is to review some of the reported AR Art work since the AR term was first coined in 1990, focusing on collaborations between different disciplines, especially during the early years, where art and technology became one. Additionally, the author reports her own experience in contributing to AR Art from an interdisciplinary perspective.
Keywords: augmented reality; art; interdisciplinary; collaboration augmented reality; art; interdisciplinary; collaboration

The relationship between science and art has fluctuated over the course of the history, with moments of proximity and moments of distance. Although they are currently usually understood as two different cultures, interdisciplinary situations of collaboration and interchange occur, often via a nexus of digital culture and the use of computers. According to [1], since the appearance of computers, scientists and artists have found a common space of work and understanding. Therefore, within the use of new technologies, the distance that separates both disciplines is becoming shorter. Today, multiple examples can be found where artists make use of new technologies in their artistic pieces (e.g., interactive videos, virtual worlds, and robots), and the Augmented Reality (AR) technology is no exception.
The term “Augmented Reality” was first coined by Caudell and Mizell in 1990 in order to describe a special kind of display used by electricians for aircraft repair and maintenance that was able to show virtual information on top of real images [2]. While early definitions of AR restricted the technology to systems that used Head Mounted Displays (HMDs), aiming at an exclusively visual space, later definitions extended the concept of AR to other devices and multimedia contents not necessarily visual. Today the definition given by Azuma [3] is widely accepted, who defines augmented reality as those systems that simultaneously contain the three characteristics: mixing of real and virtual, interactivity in real-time, and three-dimensional registration.
The idea of showing synthetic data related to a real environment is not new, nor did it start with AR technology. For example, there are books in which images of the real world are mixed with drawings. This effect was also used in some films prior to the 1990s, where real characters and cartoons are mixed, such as in Mary Poppins (1964), Bedknobs & Broomsticks (1971), and Who Framed Roger Rabbit? (1988); In the exhibition A Reflected World (1966) by M. Pistoletto [4], the artist mixed photographs of people with real people by using mirrors. In this sense, it can be said that augmented reality is a discipline that, although technologically novel, conceptually it is not. However, AR requires interaction in real-time, a characteristic that is missing from the previous examples.
Since the technology was invented, at the research level a lot of collaborations between artists and other experts have arisen. Thus, AR has been used as a means to create artistic pieces, which is referred as AR Art. Today, there are a variety of APIs at the consumer level that makes it possible to create AR experiences, most of them making use of mobile technologies such as smartphones or tablets. For instance, recently Apple has launched ARKit [5] that allows building AR environments with very little knowledge about the technology behind it. Another good example is the Vuforia developer library for Unity [6], which provides users with very good examples to build their own AR experiences. However, the poor maturity of this technology during the first few years since it was born made it inaccessible for the majority of prospective end-users, including artists, which looked for collaborations with engineers and computer scientists in order to materialize their artistic pieces. To date, there are many reported works focusing on research aspects, but little attention has been paid to the added value emerging from the interdisciplinary aspect behind these works.
It is the aim of this paper to offer a new perspective on AR applications related to art, by pointing out the importance of the interdisciplinary work behind them. To that end, a review is done on some artistic-related AR applications, paying special attention to works completed during the first few years of the AR technology development, where the poor maturity of the technology itself required computer scientists and other IT experts to work in collaboration with artists, while also influencing the final result of the artistic pieces. In these papers, however, the interdisciplinary nature of the work is not properly addressed, with very few exceptions. Therefore, the author reports her own experience in order to further delve into the added value emerging from the interdisciplinary work, essential to achieve results not possible with the involved disciplines working in an isolated fashion.

AR is a transversal technology, meaning that it can be applied in many areas, such as training, maintenance, entertainment, mental health, engineering, science, and many others. Art is not an exception. Since very early on, AR has been used as a means for artists to create. Maybe because of the complexity of the technology during the first years, there have been interesting works of AR Art emerging from the collaboration of diverse disciplines, disciplines that traditionally have been considered distant. In my case, it meant collaboration between artists and an engineer in surveying and geo-information, something very rarely seen. From my own experience, the works here presented wouldn’t have be the same without a co-creation process, where a mutual understanding between the researcher and the artist was the key.
However, nowadays many artists are experts in multimedia technologies, including AR. Therefore, a question arises: are these interesting collaborations still needed? Today, it is the moment for artists and other audiences to really exploit AR, making profit of all the developments and advancements that the research community has made during the last almost 30 years. This does not mean that interdisciplinary work is not required any more, but it is expected that the final applications be not so much conditioned by the restrictions of the technology itself. In fact, due to the huge amount of (multimodal) sensors and displays, APIs, positioning strategies, realms (mixed reality), types of interaction (e.g., gestures) and many other factors, it is expected that experts in technology (e.g., multimedia engineers) will play an important role in developing applications involving AR, including for the artistic sector. Collaborations are not always easy, as different disciplines have different ways of working and different expectations, among other differences. In this sense, a new figure referred to as a “proxy” turns out to be relevant, a role needed to build bridges between disciplines in order to really bring added value from interdisciplinary work. Approaching the technology from a holistic view expands the possibilities in building richer AR experiences: a bunch of new worlds are possible with AR and interdisciplinary work. 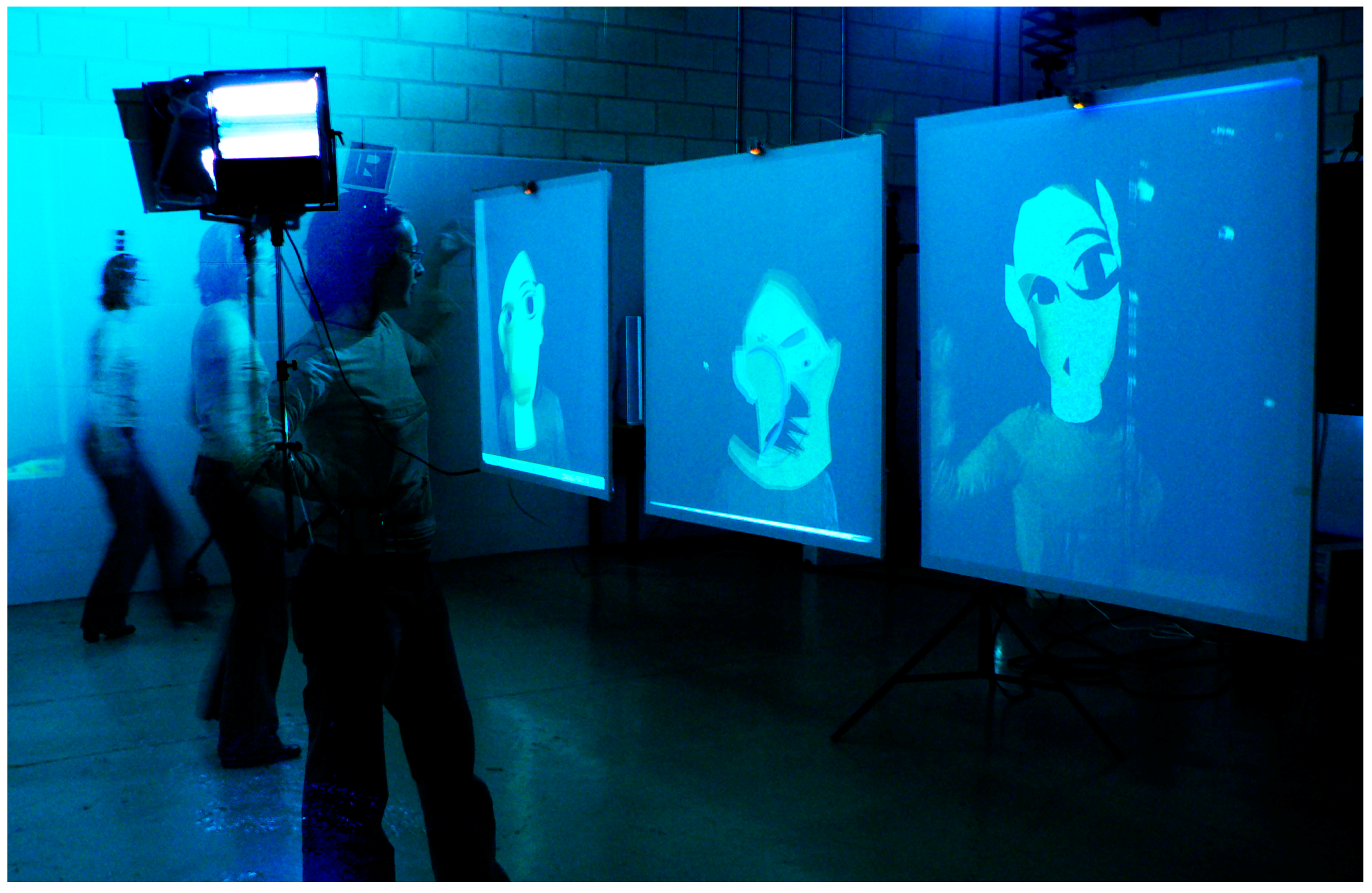