Currently, more than half of the world’s population lives in cities. Out of these more than four billion people, almost one quarter live in slums or informal settlements. In order to improve living conditions and provide possible solutions for the major problems in slums (e.g., insufficient infrastructure), it is important to understand the current situation of this form of settlement and its development. There are many different models that attempt to simulate the development of slums. In this paper, we present data mining models that correlate information about the temporal development of slums with other economic, ecologic, and demographic factors in order to identify dependencies. Different learning algorithms, such as decision rules and decision trees, are used to learn descriptive models for slum development from data, and the results are evaluated with commonly used attribute evaluation methods known from data mining. The results confirm various previously made statements about slum development in a quantitative way, such as the fact that slum development is very strongly linked to the demographic development of a country. Applying the introduced classification models to the most recent data for different regions, it can be shown that the slum development in Africa is expected to be above average. View Full-Text
Keywords: slums; informal settlements; data mining; slum development slums; informal settlements; data mining; slum development
►▼ Show Figures 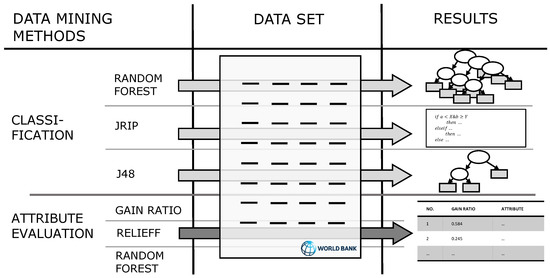