Urban Soundscapes: Characterization of a Pedestrian Tourist Route in Sorrento (Italy)
Next Article in Special Issue

Estimation of Particulate Matter Impact on Human Health within the Urban Environment of Athens City, Greece
Previous Article in Journal

Research by Design: Proposition for a Methodological Approach

Heat waves are projected to become more frequent, longer-lasting, and intense. At the same time, urban areas are confronted with the urban heat island (UHI) phenomenon, which adds to the thermal stress experienced during hot spells. Focusing on the Paris area during the hot summer of 2003, we investigated the influence of heat waves on UHI intensity, i.e., the urban-rural temperature contrast. In a first step, this was done based on observed temperatures from an urban and a rural site, showing that per C increase in the daytime temperature, the nighttime UHI intensity increased by 0.086 C. Recognizing the limited spatial representativeness of the urban experimental site, located in a park, we then performed simulations with an urban climate model, covering the wider Paris area for the summer of 2003. First, a validation was done using the aforementioned temperature measurements to do so. Subsequently, we estimated the sensitivity of the nighttime UHI intensity with respect to the daytime temperature, this time using simulated temperatures of the densely built-up areas in the center of Paris, yielding an increase of UHI intensity of 0.19 C per C increase in the daytime temperature. While these results only apply to the domain and period studied, they do confirm recent reports that the UHI intensity increases during heat waves. The results also show that for the cooler parts of the urban fabric (e.g., parks), the UHI intensification during heat waves is around half of that of the dense urban fabric, thus providing some insights into possible mitigation strategies for the future. View Full-Text
Keywords: urban heat island; urban climate modeling; heat wave episode urban heat island; urban climate modeling; heat wave episode
►▼ Show Figures 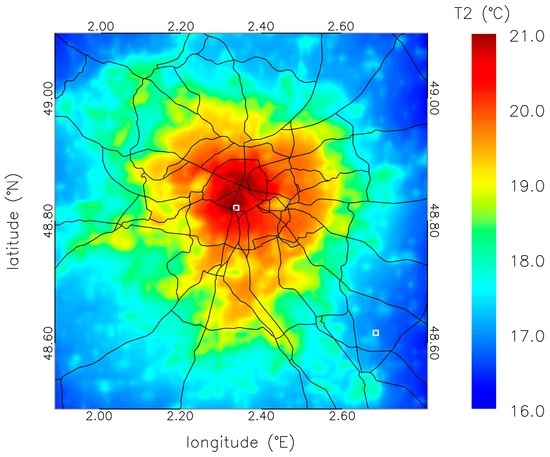