Ancient numismatics, that is, the study of ancient currencies (predominantly coins), is an interesting domain for the application of computer vision and machine learning, and has been receiving an increasing amount of attention in recent years. Notwithstanding the number of articles published on the topic, the variety of different methodological approaches described, and the mounting realisation that the relevant problems in the field are most challenging indeed, all research to date has entirely ignored one specific, readily accessible modality: colour. Invariably, colour is discarded and images of coins treated as being greyscale. The present article is the first one to question this decision (and indeed, it is a decision). We discuss the reasons behind the said choice, present a case why it ought to be reexamined, and in turn investigate the issue for the first time in the published literature. Specifically, we propose two new colour-based representations specifically designed with the aim of being applied to ancient coin analysis, and argue why it is sensible to employ them in the first stages of the classification process as a means of drastically reducing the initially enormous number of classes involved in type matching ancient coins (tens of thousands, just for Ancient Roman Imperial coins). Furthermore, we introduce a new data set collected with the specific aim of denomination-based categorisation of ancient coins, where we hypothesised colour could be of potential use, and evaluate the proposed representations. Lastly, we report surprisingly successful performances which goes further than confirming our hypothesis—rather, they convincingly demonstrate a much higher relevant information content carried by colour than even we expected. Thus we trust that our findings will be noted by others in the field and that more attention and further research will be devoted to the use of colour in automatic ancient coin analysis. View Full-Text
Keywords: colour words; hue histogram; colour representation; machine learning; computer vision colour words; hue histogram; colour representation; machine learning; computer vision
►▼ Show Figures 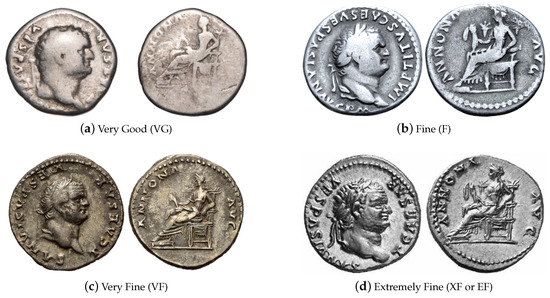