In some situations, it is necessary to strengthen or rehabilitate a structure in the short term, but before doing so, a critical analysis of the underlying causes is required to find the best technique to solve the problem. The structural strengthening is used to increase an element’s ability to resist a stress when it no longer meets the original conditions or new necessities of use due to faults, deterioration, thermal variations, and lack of maintenance. The present article aims to evaluate the strengthening of reinforced concrete beams with 0.75 mm thick SAE 1020 steel plates bonded with epoxy-based structural adhesive. The steel plates were attached to the sheared area before and after the beams were taken to the breaking point load. According to the results, it was possible to conclude the effectiveness of the strengthening applied to healthy beams that had its bearing capacity increased up to 50%. The beam that was strengthened after the shear, with a fissure that was restored with epoxy-based structural adhesive, had its load bearing capacity increased by 49.2%. The beams with fissures that were filled with mortar had their bearing capacity decreased by 58.70% if compared with the reference beams, and thus they presented an unsatisfactory performance. View Full-Text
Keywords: concrete; shear; strengthening; steel plates concrete; shear; strengthening; steel plates
►▼ Show Figures 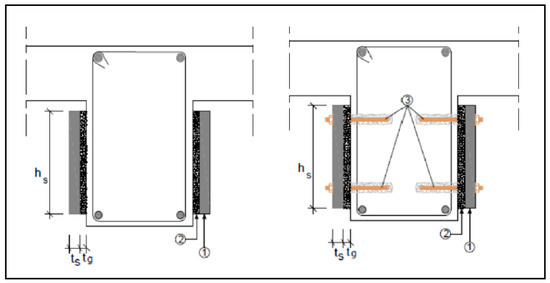