Acknowledgement to Reviewers of Inventions in 2016

Airborne remote sensing, whether performed from conventional aerial survey platforms such as light aircraft or the more recent Remotely Piloted Airborne Systems (RPAS) has the ability to compliment mapping generated using earth-orbiting satellites, particularly for areas that may experience prolonged cloud cover. Traditional aerial platforms are costly but capture spectral resolution imagery over large areas. RPAS are relatively low-cost, and provide very-high resolution imagery but this is limited to small areas. We believe that we are the first group to retrofit these new, low-cost, lightweight sensors in a traditional aircraft. Unlike RPAS surveys which have a limited payload, this is the first time that a method has been designed to operate four distinct RPAS sensors simultaneously—hyperspectral, thermal, hyper, RGB, video. This means that imagery covering a broad range of the spectrum captured during a single survey, through different imaging capture techniques (frame, pushbroom, video) can be applied to investigate different multiple aspects of the surrounding environment such as, soil moisture, vegetation vitality, topography or drainage, etc. In this paper, we present the initial results validating our innovative hybrid system adapting dedicated RPAS sensors for a light aircraft sensor pod, thereby providing the benefits of both methodologies. Simultaneous image capture with a Nikon D800E SLR and a series of dedicated RPAS sensors, including a FLIR thermal imager, a four-band multispectral camera and a 100-band hyperspectral imager was enabled by integration in a single sensor pod operating from a Cessna c172. However, to enable accurate sensor fusion for image analysis, each sensor must first be combined in a common vehicle coordinate system and a method for triggering, time-stamping and calculating the position/pose of each sensor at the time of image capture devised. Initial tests were carried out over agricultural regions with geometric tests designed to assess the spatial accuracy of the fused imagery in terms of its absolute and relative accuracy. The results demonstrate that by using our innovative system, images captured simultaneously by the four sensors could be geometrically corrected successfully and then co-registered and fused exhibiting a root-mean-square error (RMSE) of approximately 10m independent of inertial measurements and ground control. View Full-Text
Keywords: hyperspectral; multispectral; thermal; RGB; orthophoto; RPAS; UAV; sensor pod; image fusion; remote sensing; light aircraft hyperspectral; multispectral; thermal; RGB; orthophoto; RPAS; UAV; sensor pod; image fusion; remote sensing; light aircraft
►▼ Show Figures 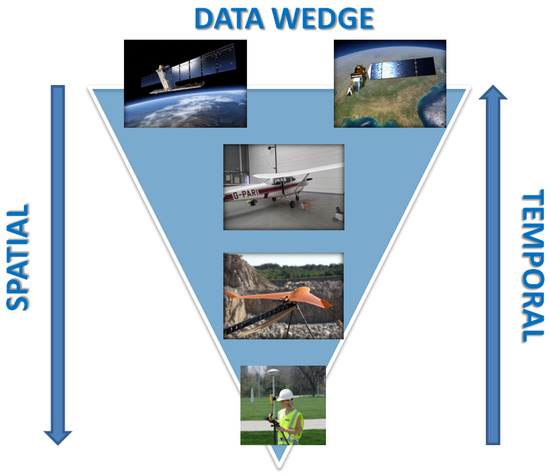