:
A low-cost medium-power carbon dioxide (CO2) laser system is designed, constructed, and characterized to produce coherent, monochromatic laser radiation in the infrared region. The laser cavity is simulated and designed by using ZEMAX optic studio. A switch-mode high-tension pump source is designed and constructed using a flyback transformer and simulated using NI Multisim to study the voltage behavior at different node points. A prototype cooling system/chiller is designed and built using thermo-electric coolers (TEC) to remove the excess heat produced during laser action. Various parameters, such as pumping mechanism, chiller stability, efficiency, output power, and current at different applied voltages, are studied. The chiller efficiency at different output powers of the laser is analyzed, which clearly shows that the chiller’s cooling rate is good enough to compensate for the heat generated by the laser system. The center wavelength of the carbon dioxide laser is 10.6 μm with an FWHM of 1.2 nm simulated in the ZEMAX optic studio. The output beam penetration through salt rock (NaCl), wood, and acrylic sheet (PMMA) at various output powers is analyzed to measure the penetration depth rate of the CO2 laser.
Keywords:
optical design; thermoelectric coolers; irradiance; high tension pump source; penetration depth; pulse width modulation

The CO2 laser is one of the most stunning, efficient, and practical lasers discovered to date. The carbon dioxide laser operates in the infrared band and creates a significant quantity of heat, which is employed as a primary property in a variety of applications [1]. Super-pulsed carbon dioxide lasers have been widely employed in medical and aesthetic applications in recent years. Furthermore, carbon dioxide lasers are employed in industrial operations. A system’s higher efficiency and operational stability are essential for industrial applications. The most typical use is material cutting. Carbon dioxide laser cutting provides the advantages of excellent accuracy, low incision width, and a smooth surface. As carbon dioxide laser technology matures, it is being utilized in a variety of industries such as industry, health, and agriculture to enhance human spiritual and material civilizations, as well as to improve people’s everyday lives and raise mankind to a new level [2,3]. Kumar Patel [4] reported the first CW output of about 1 mW using molecular vibrational-rotational transitions of carbon dioxide (CO2) electronic ground state [5]. In 1969, Philip L. Hanst and John A. Morreal designed and tested a CO2 laser system with two gas absorption cells built into the cavity. High-powered pulsed operation at varying wavelengths ranging from 9.08 microns to 10.6 microns at repeat frequencies of up to 100 kHz has been accomplished by the correct range of absorbing gases [6]. A low-pressure continuous-wave CO2 laser for single-line application was planned and built in 1981. This laser works in a single axial mode with a frequency stabilization of greater than 100 kHz at the peak of the power profile. The peak power varies from 0.1 to 5 Watts [7]. In 1997, a high-power 24-channel radial array slab RF excited carbon dioxide laser referred to as the Zodiac geometry was built [8]. A transverse flow transversely excited (TFTE) CW CO2 with a maximum output power of about 15 kW has been developed by A.K. Nath and T. Reghu. The laser was operated up to 15 kW output power in four modes: continuous wave mode, periodic pulse mode, single-shot mode, and processing velocity-dependent power mode with 1.2 kHz modulation bandwidth [9]. A single CO2 laser beam may generate a record peak power of 15 TW. Using a master oscillator-power amplifier laser system up to 100 J of energy may be extracted in a train of 3 ps laser pulses separated by 18 ps [10]. A low-cost homemade prototype nitrogen laser [11] is designed and fabricated using the air as an active medium to generate a nano-second pulse laser, but the efficiency was low, with a similar approach reported in this article. With the passage of time, the efficiency of CO2 lasers increased, but commercially available lasers are quite expensive. Unfortunately, the cost of commercially available carbon dioxide lasers is prohibitive for many small industries and educational institutes. Our approach is straightforward in making the CO2 laser. We used a sealed tube and developed the high-tension pump source and non-conventional cooling system for the tube to fabricate a cost-effective and efficient medium-power CO2 laser system.
This paper mainly introduces the designing, constructing, and characterizing of a low-cost medium-power CO2 laser system with a switch-mode power supply and prototype cost-effective homemade chiller. A cost-effective prototype chiller is designed and fabricated using Thermoelectric coolers and small aluminum blocks. Furthermore, this research focuses on the carbon dioxide laser, covering its features, structure, and applications.

The laser cavity design is carried out using Zemax Optic Studio [12] software. When all the surfaces are defined for all relevant parameters involved in the design, the ZEMAX provides a 2D layout [13,14] and a shaded design model [15]. A reflecting mirror, focusing lens, and detector are used to detect and analyze the beam in the design. The incident flux on the surface is referred to as irradiance and is measured as power per unit area. When the applied voltage across the laser cavity increases, more photons are delivered inside the cavity and output power increases linearly.
Figure 1a shows the output power variation with the number of cycles within the cavity designed in the ZEMAX. It shows that with the increase in cycles that cause the stimulated emission in the laser cavity, the output power of the laser beam increases.
The output of the CO2 laser system lies in the IR region. Figure 1b shows the output beam spectrum of the laser cavity designed in the ZEMAX optic studio. For spectrum, a diffraction grating is placed at the output of the laser cavity. The output beam is resolved into its components, and a Gaussian shape spectrum at the output is obtained.
The simulated result shows the central wavelength at 10.6 µm with an FWHM of 1.2 nm, as shown in Figure 1b, which confirms the emission of the laser system in the IR region. This irradiance plot represents the top view of the Gaussian spectrum, and irradiance changes symmetrically on both sides from the center of the beam spot.

The high-tension pump source circuit is designed and simulated to understand the voltage behavior and its waveform. This circuit Figure 2a is implemented in designing and fabricating the high-tension pump source. NI Multisim electrical/electronic circuit simulation software tools were used for these simulations [16,17,18].
The graph Figure 2b shows a square wave generation simulation at the output of 555-timer-based pulse width modulation (PWM). The frequency of the square wave voltage can be changed by varying the capacitor or resistance values [11,19,20].
The waveform of the output pulses Figure 2c shows the behavior of the MOSFET IRFZ44 when a PMW’s square wave signal is applied to the gate. The gate’s voltage Figure 2a controls the drain to the source current [21]. The graph Figure 2d shows the output of 555-timer-based PWM (Blue) and flyback transformer (Red). When the peak of the square wave signal from the PWM approaches the gate of the MOSFET, the current starts flowing in the flyback transformer’s primary coil through the drain to the source; during this time, there is no voltage at the output of the flyback transformer. When the square wave signal’s lowest point reaches the MOSFET’s gate, no current flows through the primary of the flyback transformer. The magnetic field collapses in the core, very high voltage is induced in the secondary coil of the flyback transformer, and the current starts flowing through the load. This cycle is repeated repeatedly to produce high-voltage pulses [22,23].

4.1. Characterization of the Laser System

Design, construction, and characterization of a very low-cost sealed tube medium power (40 W) CO2 laser system is presented, consisting of a prototype chiller and flyback-based high voltage power supply. A high-tension pump source is designed to generate the required high voltage in the kilovolts range (8 kV to 30 kV) in the cavity, using the flyback transformer along with its flyback driver circuit. A prototype cooling system is designed and constructed using a thermoelectric cooler (TEC) to maintain the laser cavity temperature. The cooling system can cool down the water up to 8 °C with a cooling rate of 0.7 °C/min, which is enough to compensate for the heat generated by the tube and make it stable for an extended period of its operation. The performance and efficiency of the cooling system at the different laser output power are studied, which shows that the chiller is stable and maintains the cavity temperature during the laser’s long-time operation. Comparing power, current, and applied voltage indicates that the current flowing through the tube increases with an increase in the applied voltage so that laser output power increases. The laser beam’s penetration rate through the rock of pink salt, wood, and acrylic sheet (PMMA) at different output power is investigated, which shows that increasing the output power increases the penetration rate through the material. The laser penetration rate through the material decreases with increasing melting points because heat is produced when the laser falls on the material. Therefore, the laser penetration rate through the rock of pink salt is less than the acrylic sheet (PMMA) because of its high melting point.

The data supporting this study’s findings are available within the article.

On behalf of all authors, the corresponding author states that there is no conflict of interest. 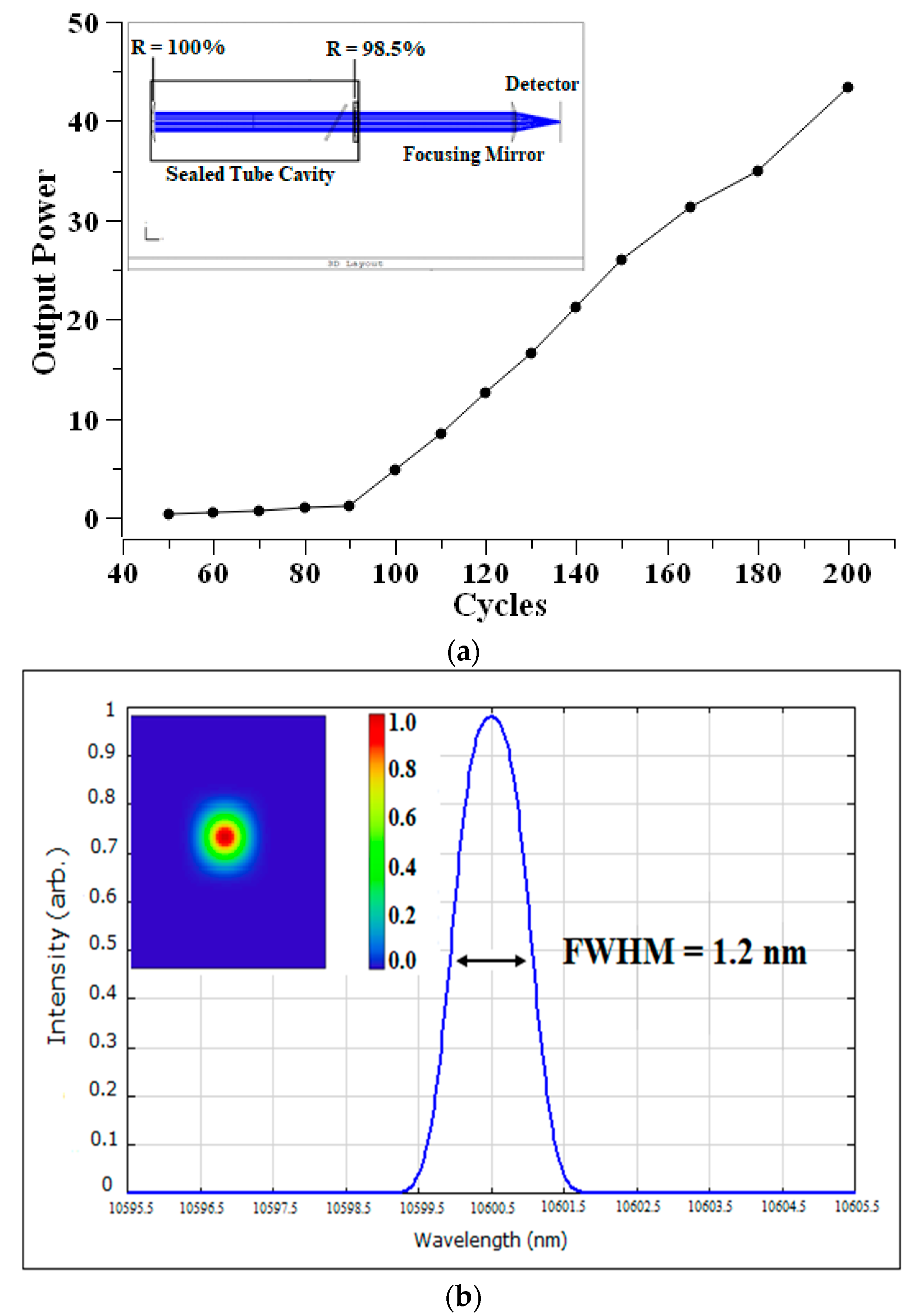