The laser plasma accelerator has shown a great promise where it uses plasma wakefields achieving gradients as high as GeV/cm. With such properties, one would be able to build much more compact accelerators, compared to the conventional RF ones, that could be used for a wide range of fundamental research and applied applications. However, the electron beam properties are quite different, in particular, the high divergence, leading to a significant growth of the emittance along the transport line. It is, thus, essential to mitigate it via a strong focusing of the electron beam to enable beam transport. High-gradient quadrupoles achieving a gradient greater than 100 T/m are key components for handling laser plasma accelerator beams. Permanent magnet technology can be used to build very compact quadrupoles capable of providing a very large gradient up to 500 T/m. We present different designs, modeled with a 3D magnetostatic code, of fixed and variable systems. We also review different quadrupoles that have already been built and one design is compared to measurements.
Keywords: quadrupoles; permanent magnets; laser plasma acceleration; free electron laser quadrupoles; permanent magnets; laser plasma acceleration; free electron laser

Quadrupoles consist mainly of four magnets with magnetization vectors directed as shown Figure 1, in which the dipole terms at the core of the system are canceled and the field magnitude increases with the radial distance, so particles that are farther from the center experience a larger force. In the scheme, the electron experiences an inward force towards the center in the horizontal plane and outwards in the vertical plane, Thus, a quadrupole focuses in one plane and defocuses in the other.

In the case of permanent magnets, the current density is zero, so starting with Maxwell equations: where B is the magnetic field. Considering that the field along the longitudinal direction is zero ( = 0) and does not vary ( = 0), and neglecting higher order multipoles for small transverse displacement: where is the field gradient along the horizontal axis x and vertical axis z. Equation (1) is represented in Figure 1 where the field increases for larger distance from the center.

The magnetic field of realistic quadrupoles, even though designed to generate only one multipolar order, contains higher order multipoles called harmonics resulting from the structure and magnetic or mechanical assembly imperfections. In case of an infinitely long magnet, the local field B inside a quadrupole can be expressed as: where n is the multipolar order, and the normal and skew multipolar coefficients respectively and r the radius for which multipolar coefficients are computed or measured. A perfect quadrupolar field consists only of term, as for the field generated by a ideal quadrupole contains systematic multipole terms (, , , …) due to the device geometry. Mechanical and magnetic impurities give rise to the non-systematic terms including the skew components.
The vertical field component is negative for 0, positive for 0, and null on the axis. This evolution is the same for the horizontal field along the z. In a 3D model, the following components and defined as and are introduced. The quadrupole field gradient (2D and 3D) can be expressed as:

A Halbach structure is an array of magnets with specific arrangements generating a concentrated strong magnetic field on one side whilst creating a weak stray field on the opposite side [37]. Different multipole systems can be build using such structure as displayed in Figure 2 where 12 segmented magnets are used to design a dipole, quadrupole and a sextupole.
Concerning the quadrupole, and considering a long magnetic length (L) the gradient can be expressed as follows [37]: where is the remanence field, M the number of segments, the inner radius and the outer radius. As M tends to infinity K = 1, implying that the quadrupole gradient is enhanced for larger number of segments, but the magnet gets more complicated and expensive to manufacture.
The quadrupoles are characterized using Radia magnetostatic code based on boundary integral method. magnets are most commonly used due to their high remanent field and coercivity at room temperature [38,39,40]. The materials and quadrupole parameters are presented in Table 1.
Figure 3 shows the Halbach rings for different number of segments designed by Radia. The magnetization vectors of the magnets depends on the number of segments of the Halbach structure: = ()6*/M, where i is an integer, for example the angle between the magnetization vectors of two consecutive magnets is 270° for M = 4, 135° for M = 8 and 90° for M = 12 etc.…
Figure 4a presents the computed gradient versus magnetic length where Equation (4) is valid for large values ~50 mm. The gradient is computed for different numbers of segments and are compared to Equation (4) (see Figure 4b), where the gradient increases for higher numbers of segments. Figure 4c,d presents the computed gradient for different , and shows good agreement with Equation (4).

This section presents different quadrupole designs following a Halbach structure with the addition of poles to enhance the gradient. Figure 5 shows three designs: Type (I) composed of four magnets and four poles, Type (II) composed of eight magnets and four half magnets half poles, Type (III) using 12 segmented structure in which four of them are half poles half magnets and the rest are magnets surrounded by pole ring shaped to divert the magnetic field lines back into the core of the system.
Figure 6 shows the gradient computed for the three designs of Figure 5 and are compared to the Halbach rings. Type (I) achieves a gradient higher by a factor of ~2 compared to the four segmented Halbach ring. Indeed, the addition of poles achieve a higher gradient and a less costly system. Type (II) design has the same gradient as the 8 segments Halbach ring with a slight 2% increase. The gradient achieved with the 12 segmented Halbach ring is quite remarkable as compared to type (III) with a much more complex design to generate a similar gradient.

Various original designs were proposed and developed for the permanent magnet quadrupole to provide a variable gradient:

The QUAPEVAs are characterized using the stretched wire measurement, in which the multipoles are determined at a radius of 4 mm that corresponds to the good field region. The stretched-wire bench [56] has been used for magnetic field integral measurements.
Table 2 presents the maximum gradient for the seven systems (QUAPEVAs) measured with the stretched wire. The difference with respect to the simulations reduces for longer magnetic length due to an insufficient number of mesh in the longitudinal axis that is time consuming.
Table 3 compares the measured and simulated multipoles for the QUAPEVA of magnetic length 100 mm. The dipolar term (b) in the simulation is not equal to zero due to computational errors, and the one measured is probably due to a slight orientation of one of the cylindrical magnets or the precision of the bench. The discrepancy with respect to simulations increases for multipoles with weaker signal.

The models presented previously are summarized in Table 4 with their acheivable gradient and tunability. Other characterizations of a quadrupole are the systematic multipoles (b, b, b, …) that derive from the structure geometry and the non-systematic multipoles that emerge from magnets/poles impurities or mechanical errors. The beam quality can quickly deteriorate if these terms are not kept low; however their effect highly depends on the beam size in the quadrupole aperture and the gradient homogeneity also known as good field region. In the case of the LPA, the specifications in terms of multipoles are less stringent than a recirculating acclerator, typically by one order of magnitude. On the other hand, the gradient tuneability should be larger.
Table 5 presents a summary of the PMQs already built that are presented in the previous section.

A permanent magnet-based quadrupole is quite a compact device achieving a very high gradient of the orders of hundreds of T/m making it essential for future compact linear accelerators including laser plasma accelerators. Conventional electromagnet technology, with copper conductors wrapped around soft iron poles, enables to tune the gradient by simply changing the current but with significant continuous power consumption to maintain the magnetic field. Furthermore, superconducting magnets produce very large magnetic field but requires an expensive Helium infrastructure to keep the magnets in superconducting state. Thus, with zero power consumption, permanent magnet-based systems pave the way towards a green society and with new innovative designs. Also the challenges of wide tunability and high field homogeneity are presentely mitigated with the various examples of built systems.
So far, PMQs are intalled and commissioned for storage rings, LPA and collider applications, but the high multipole contents set a drawback for some applications like diffraction limited light sources. A proposed design to cross that barrier is to design hyperbolic-shaped magnets and poles to reduce the multipole contents in compromising on the gradient variability.

The article is written by A.G. and M.-E.C.; D.O. contributed to the Active Plasma Lens part. The modeling is done by A.G. under the supervision of C.K., F.M. and M.V.; the measurements are done by C.K. and A.G.

The authors would like to thank J. L. Lancelot and his team (O. Cosson, F. Forest, P. Jidkov) at Sigmaphi for the joint development of the QUAPEVA magnets, the SOLEIL group GMI and C. Vallerand from LAL. 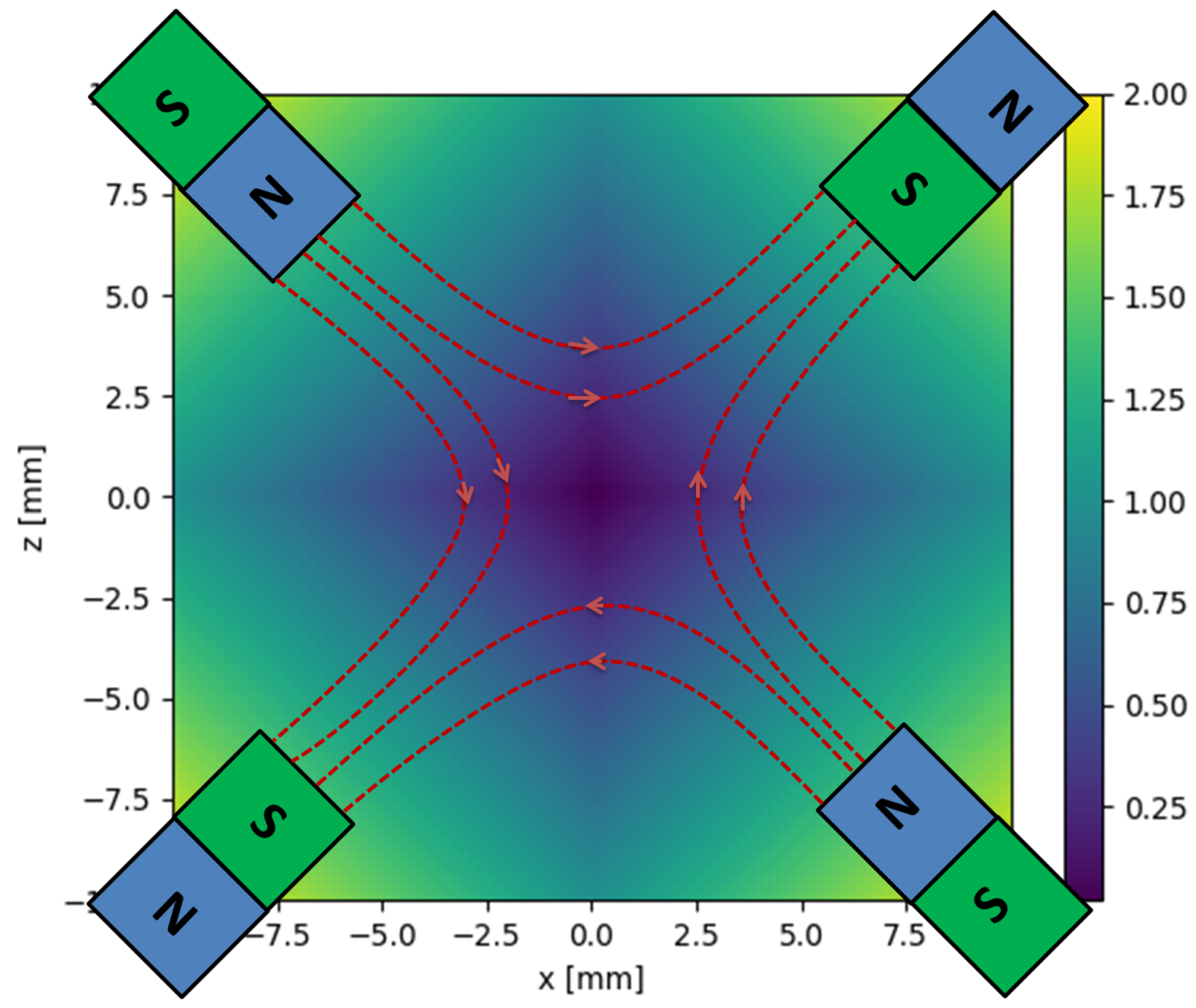 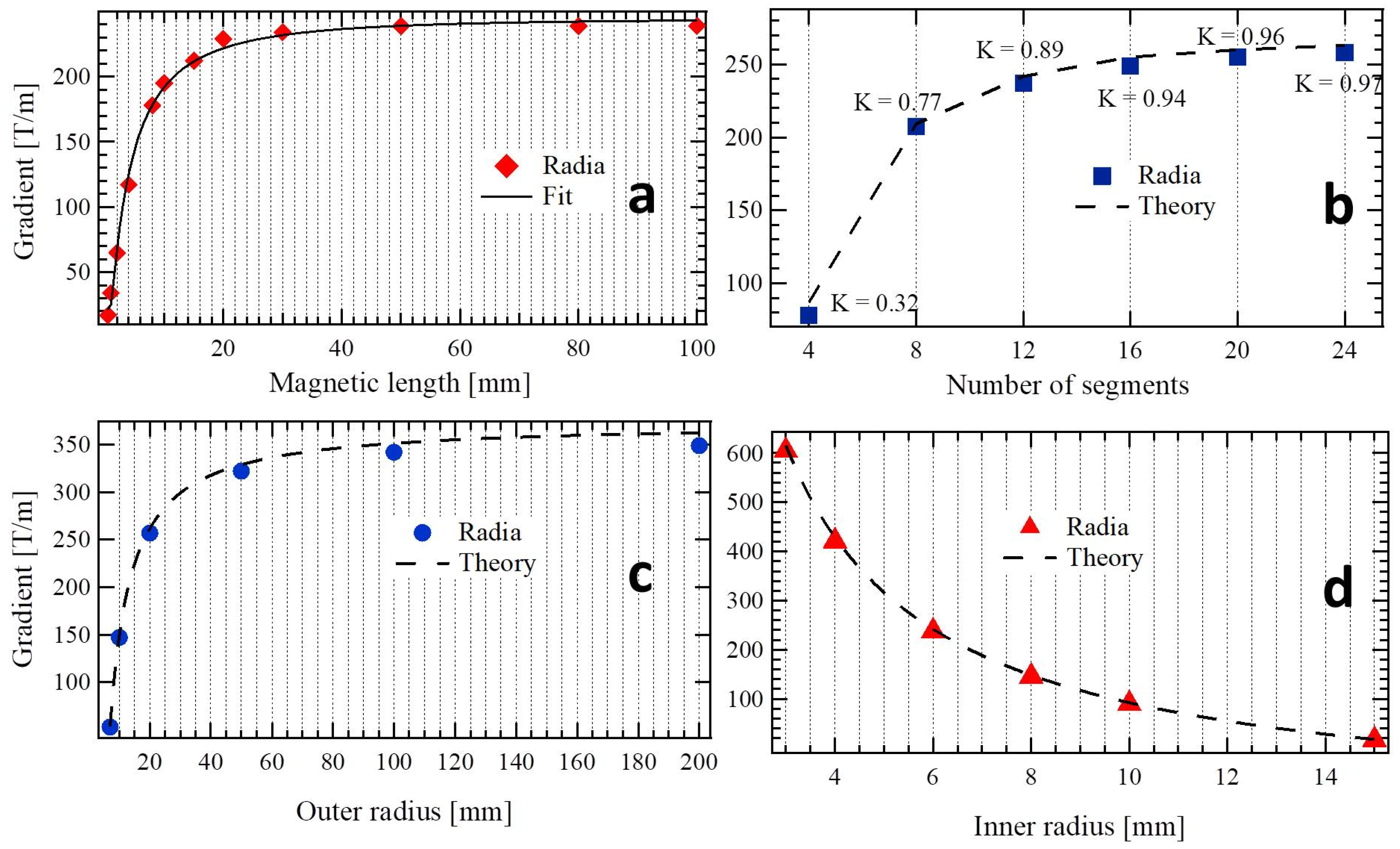 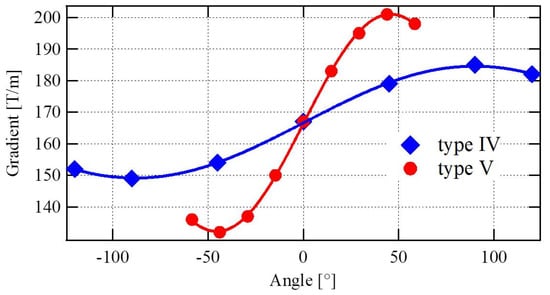 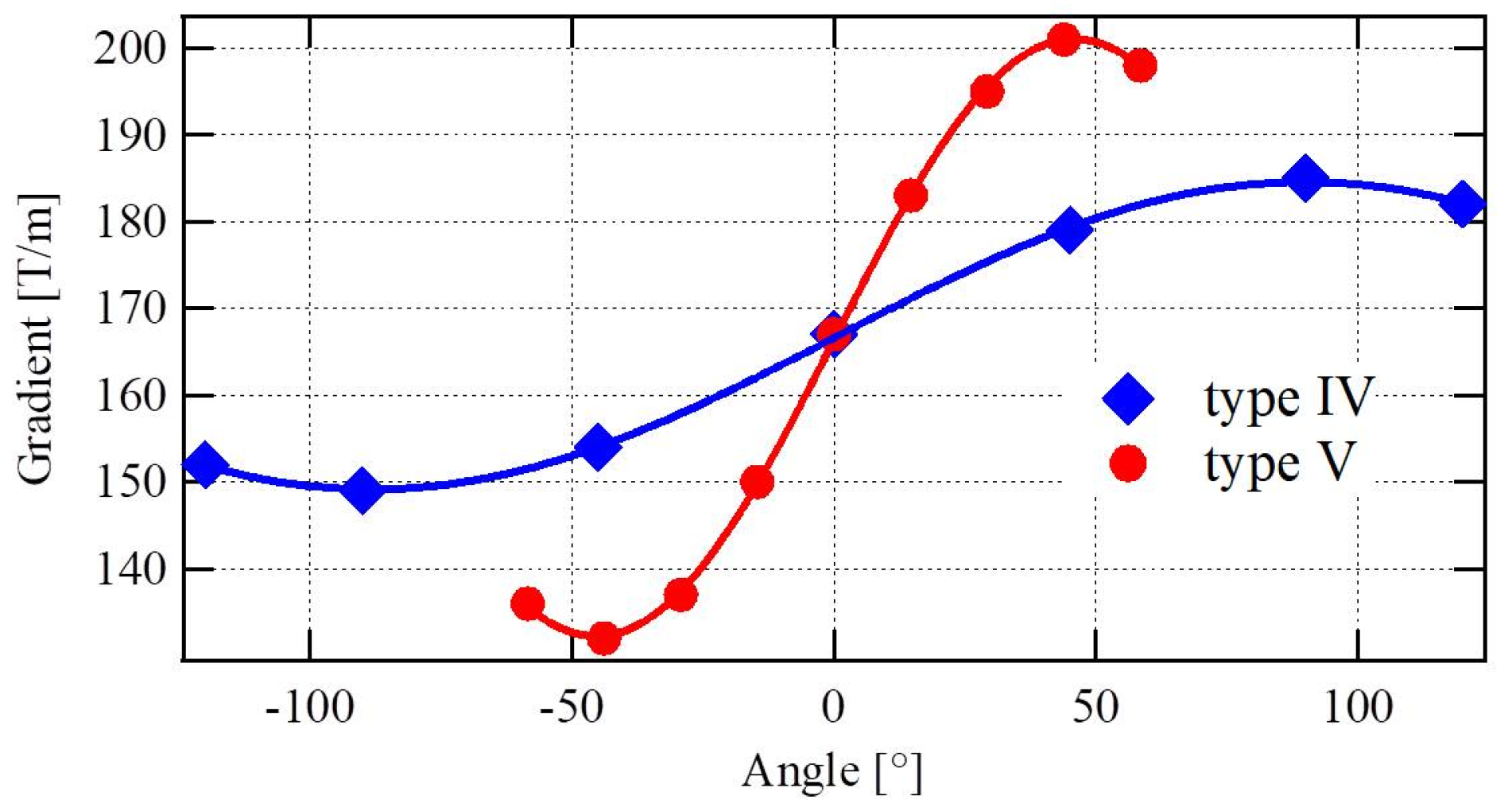 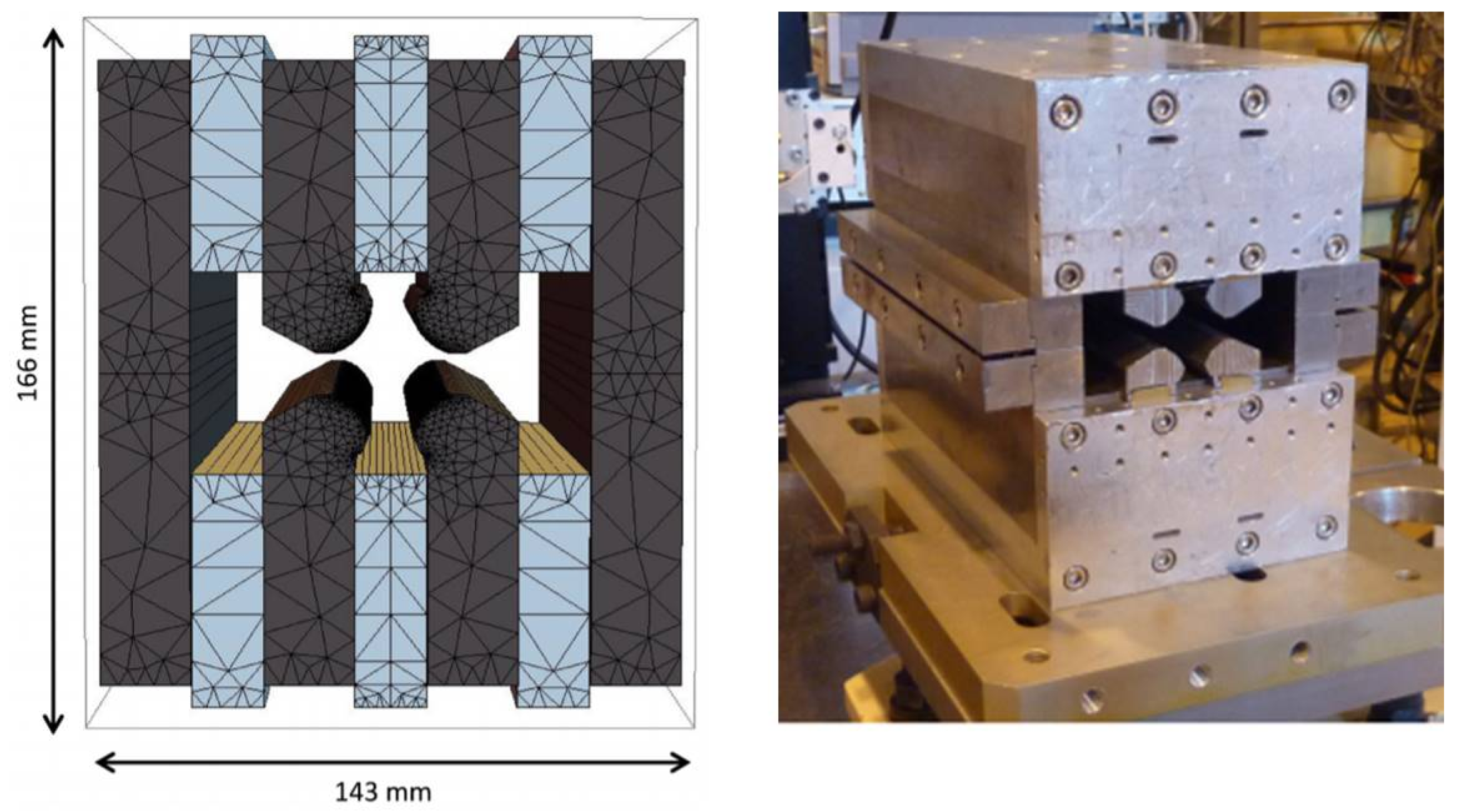