On Theoretical Incomprehensibility
Next Article in Special Issue

Gadamer, Levinas, and the Hermeneutic Ontology of Ethics
Previous Article in Special Issue

Time Is/Time Was/Time Is Not: David Mitchell and the Resonant Interval

Within this paper, I explore the look and feel of the subjective point-of-view (POV) shot in narrative cinema and how it presents an awkward and uncomfortable space for the viewer to inhabit. It considers what David Bordwell has called the surrogate body: the concept in which viewers step into the role of an offscreen protagonist. In numerous films, this style invites the spectator to see and feel through the eyes and movement of a particular type of surrogate character, which as I argue, predominantly consists of killers, victims or socially inept characters. The term I give for this particular trait in cinema is hap-tech narration, which is inspired by Laura Marks’ concept of haptic cinema. Unlike Marks’ understanding of haptic which focuses upon sensual beauty, hap-tech narration considers phenomenological uncomfortableness which is considered through Don Ihde’s philosophy of technology. This paper incorporates Ihde’s framework of postphenomenology, which considers how experientiality is changed and filtered through technological devices (which in this analysis will be the technology of the camera and the frame of the screen). Using Ihde’s postphenomenological understanding of human–technology relationships (which this work explores in detail), I consider a range of narrative films that utilise POV camerawork, including: Delmer Daves’ Dark Passage (1947), Michael Powell’s Peeping Tom (1960) and Julian Schnabel’s Le Scaphandre et le Papillon (The Diving Bell and Butterfly, 2007). Each of these titles present events through the subjective gaze of a killer, victim or socially damaged character. This paper offers a rationale as to why this is the case by addressing POV through the philosophy of Ihde, enabling an understanding of hap-tech narration to be unpacked, in which viewers are placed into corrupted and damaged corporeality through the technological power of the camera. View Full-Text
Keywords: subjective cinema; media; POV; narrative; body; postphenomenology and Ihde subjective cinema; media; POV; narrative; body; postphenomenology and Ihde
►▼ Show Figures 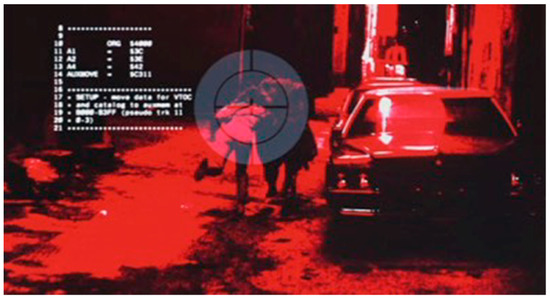