The Interpretation of Probability: Still an Open Issue? 1
Previous Article in Journal

An Ontological Solution to the Mind-Body Problem

Entrance Fees and a Bayesian Approach to the St. Petersburg Paradox

:
In An Introduction to Probability Theory and its Applications, W. Feller established a way of ending the St. Petersburg paradox by the introduction of an entrance fee, and provided it for the case in which the game is played with a fair coin. A natural generalization of his method is to establish the entrance fee for the case in which the probability of heads is . The deduction of those fees is the main result of Section 2. We then propose a Bayesian approach to the problem. When the probability of heads is the expected gain of the St. Petersburg game is finite, therefore there is no paradox. However, if one takes as a random variable assuming values in the paradox may hold, which is counter-intuitive. In Section 3 we determine necessary conditions for the absence of paradox in the Bayesian approach and in Section 4 we establish the entrance fee for the case in which is uniformly distributed in , for in this case there is a paradox.
Keywords:
St. Petersburg paradox; entrance fees; Bayesian analysis
MSC:
60F05

A way of ending the paradox, i.e., making the game fair in the sense discussed by [8], is to define an entrance fee that should be paid by a player so he can play n trials of the St. Petersburg game. This solution differs from the solutions given above in the fact that it does not take into account the utility function of a player, although it is rather theoretical, for it determines the cost of the game based on the convergence in probability of a convenient random variable. Furthermore, Feller’s solution is given for the scenario in which the player pays to play n trials of the game, i.e., he pays a quantity to play n trials of the game described above and his gain is the sum of the gains at each trial. In Feller’s definition, the entrance fee will be fair if tends to 1 in probability, in which is the gain at the kth trial of the game and . If the coin is fair, it was proved by [9] that .
Note that, of course, . However, gives the rate in which the accumulated gain at the trials of the game increases, so that paying the entrance fee may be considered fair, for it will be as close to the accumulated gain in n trials of the game as desired with probability 1 as the number of trials diverges. Although classic and well-known in probability theory, Feller’s solution may still be generalized to the case in which the coin used at the game is not fair, in the following way.
As a generalization of the St. Petersburg game, one could toss a coin with probability of heads. If the paradox still holds, for:
However, if , so there is no paradox. Applying the same method used by [9], we have, for the game played with a coin with probability of heads, the entrance fee presented in the theorem below. This has remained an open problem for the last decades and is originally solved in this paper. Proofs for all results are presented in the Appendix A.
Theorem 1.
Let . If and then
Figure 1 shows the entrance fees for selected n and . It is important to note that the limit of , as defined in Theorem 1, as increases to , does not equal the entrance fee for the fair coin game. In fact, for all values of n. Therefore, the entrance fee has an interesting discontinuity property at . Furthermore, as the value of decreases, the entrance fee increases for each n. This behaviour is expected for as the value of decreases, it will take longer for the first heads to show up and the player can expect to gain more money.

These authors contributed equallly to this work. 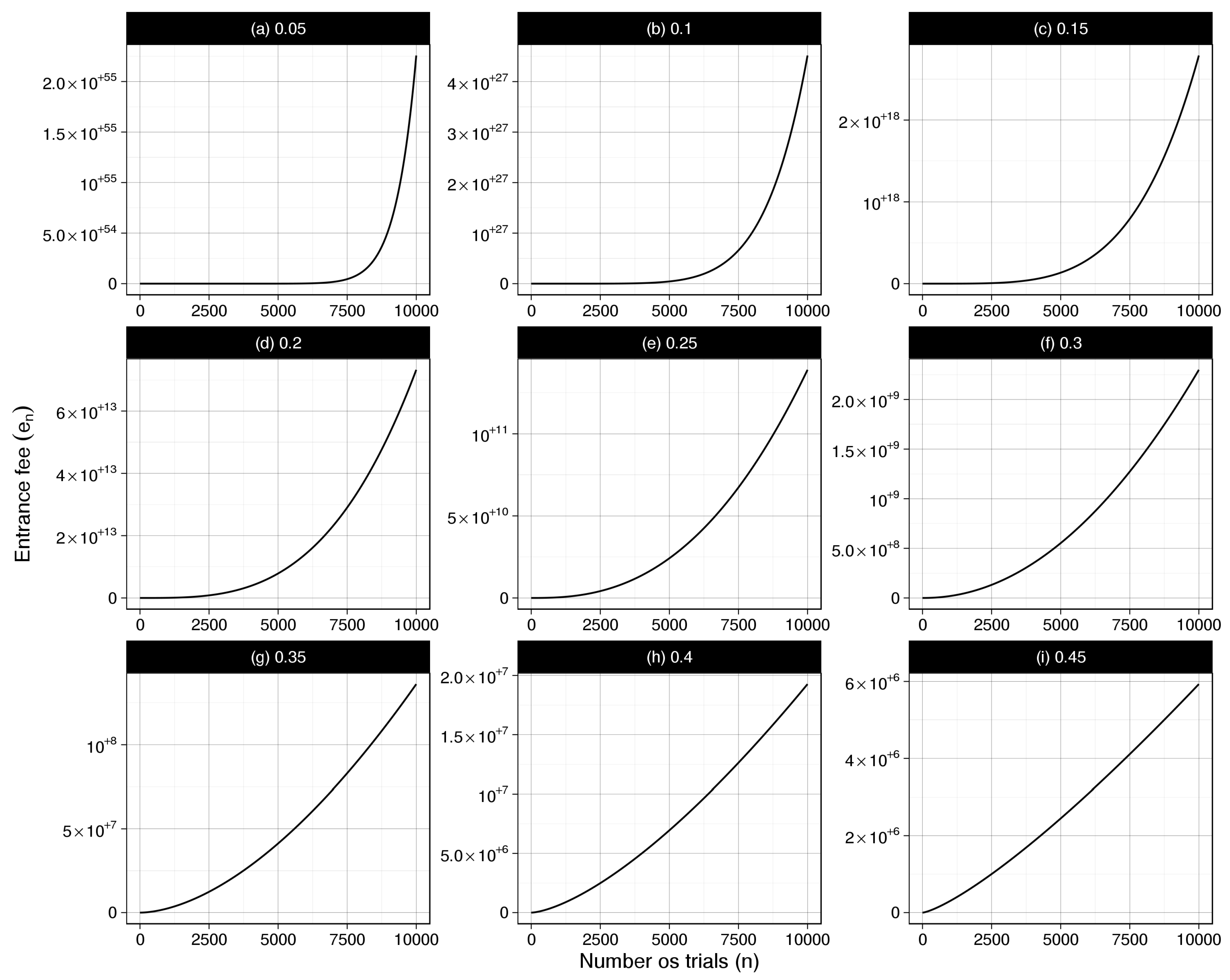 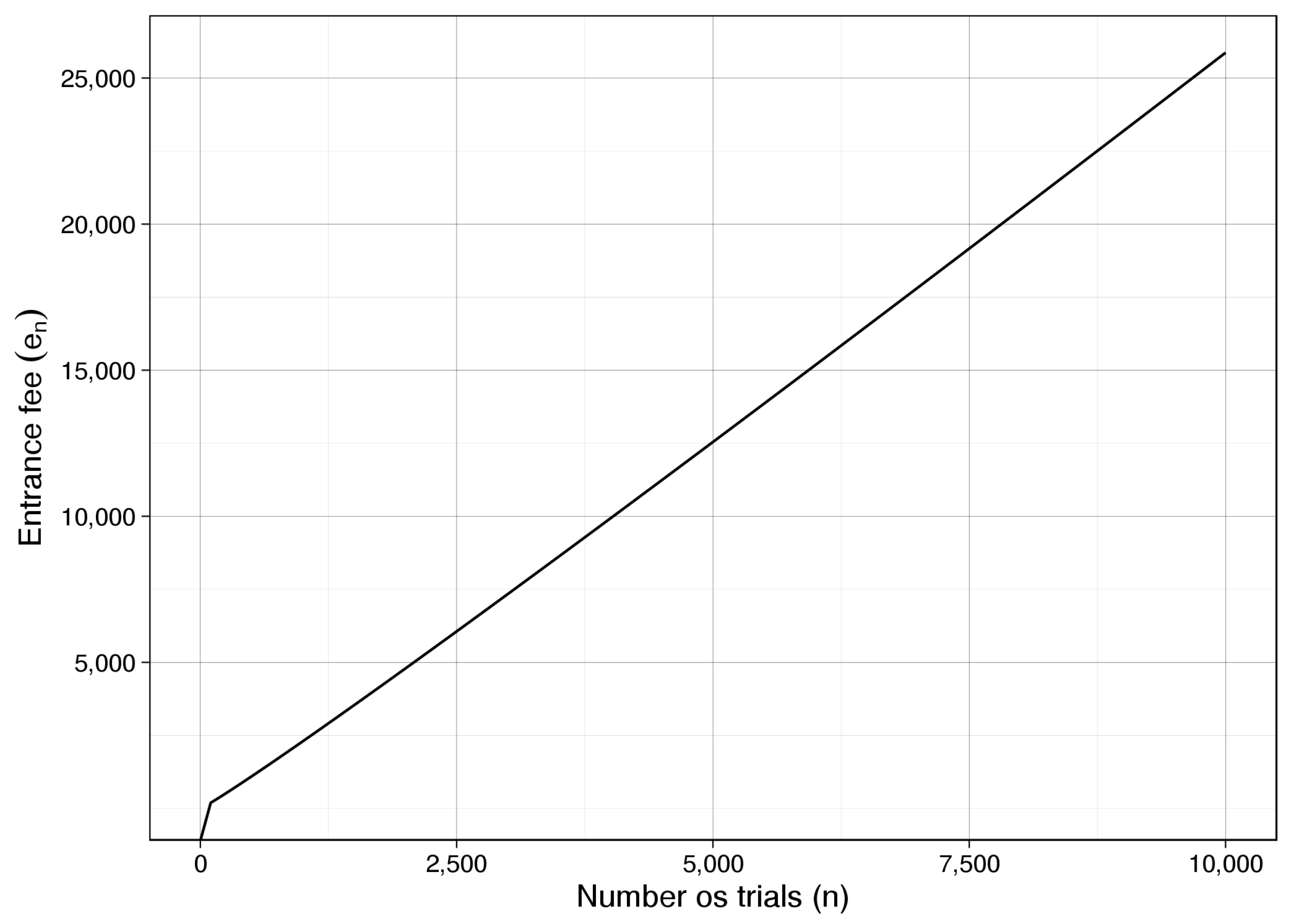