A Roadmap to Newborn Screening for Duchenne Muscular Dystrophy

Duchenne muscular dystrophy (DMD) is the most common childhood form of muscular dystrophy, with an estimated frequency of 1:5000 live births. The impact of the disease presents as early as infancy with significant developmental delays, and ultimately loss of ambulation and respiratory insufficiency. Glucocorticoids are the only pharmacological agents known to alter the natural progression of the disease by prolonging ambulation, reducing scoliosis, and assisted ventilation. Introduction of therapy at an early age may halt the muscle pathology in DMD. In anticipation of the potentially disease-modifying products that are reaching regulatory review, Parent Project Muscular Dystrophy (PPMD) formally initiated a national Duchenne Newborn Screening (DNBS) effort in December 2014 to build public health infrastructure for newborn screening (NBS) for Duchenne in the United States. The effort includes a formalized national Duchenne Newborn Screening Steering Committee, six related Working Groups, a Duchenne Screening Test Development Project led by PerkinElmer, a program with the American College of Medical Genetic and Genomics’ Newborn Screening Translation Research Network (NBSTRN), and collaborations with other Duchenne partners and federal agencies involved in NBS. We herein review the organization and effort of the U.S. DNBS program to develop the evidence supporting the implementation of NBS for DMD. View Full-Text
Keywords: Duchenne; newborn screening; gene therapy; muscular dystrophy Duchenne; newborn screening; gene therapy; muscular dystrophy
►▼ Show Figures 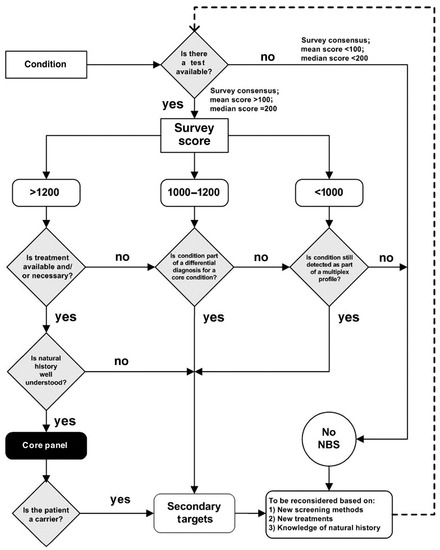