The Further Adventures of Newborn Screening for Biotinidase Deficiency: Where It Is at and What We Still Need to Know

Urea cycle disorders (UCDs) are common inborn errors of metabolism, with an incidence of one in 30,000 births. They are caused by deficiencies in any of six enzymes and two carrier proteins, the most common being Ornithine Transcarbamylase Deficiency (OTCD). OTCD results in impairment to excrete nitrogen, causing toxic buildup of ammonia with resultant encephalopathy. Hyperammonemia (HA) induces the conversion of glutamate to glutamine in the brain. Excess glutamine in the brain causes osmotic changes, cerebral edema, changes in astrocyte morphology, and cell death. Acute symptoms of HA include vomiting, hyperventilation, seizures, and irritability. Long-term neurological effects include deficits in working memory and executive function. To date, there are no predictors of prognosis of infants with neonatal onset OTCD outside of the plasma ammonia level at presentation and duration of a hyperammonemic coma. We provide a comprehensive analysis of a 16-year-old male with neonatal onset of OTCD as an example of how brain biomarkers may be useful to monitor disease course and outcome. This male presented at 8 days of life with plasma ammonia and glutamine of 677 and 4024 micromol/L respectively, and was found to have a missense mutation in Exon 4 (p. R129H). Treatment included protein restriction, sodium benzoate, and citrulline, arginine, and iron. Despite compliance, he suffered recurrent acute hyperammonemic episodes triggered by infections or catabolic stressors. We discuss the long-term effects of the hyperammonemic episodes by following MRI-based disease biomarkers. View Full-Text
Keywords: urea cycle disorder; ornithine transcarbamylase deficiency; magnetic resonance imaging; magnetic resonance spectroscopy urea cycle disorder; ornithine transcarbamylase deficiency; magnetic resonance imaging; magnetic resonance spectroscopy
►▼ Show Figures 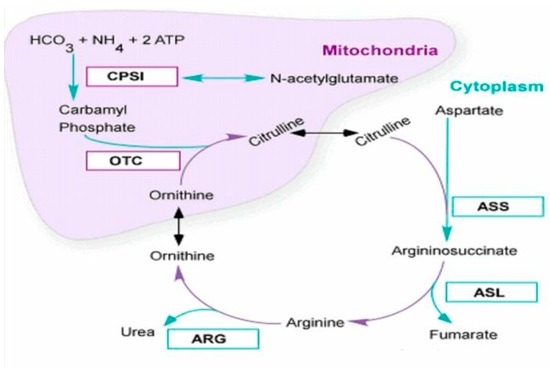