Assessment of the Retromolar Canal in Taiwan Subpopulation: A Cross-Sectional Cone-Beam Computed Tomography Study in a Medical Center

The retromolar fossa, in the form of a triangular depression, can be observed between the temporal crest medially and the anterior border of the ramus of the mandible laterally [1]. Clinically, this region is covered by elevated mucosa of variable size [2]. Clinicians should be aware of the regional anatomy and possible variations to avoid possible risks and complications in surgical procedures, such as impacted third molar extraction. The retromolar canal, an anatomical variation that occurs in the posterior mandible, is rarely mentioned in dentistry textbooks, and relevant studies have also highlighted numerous differences and uncertainties. The origin of the retromolar canal is explained by several hypotheses. First, Ossenberg et al. [3] discovered a high proportion of retromolar foramen (RMF) in adolescents’ mandible, and speculated that its appearance may be related to the sudden acceleration in physical development during adolescence and the adolescent growth spurt and eruption of the wisdom teeth that require more nerves and blood vessels. Ossenberg also argued that the appearance of the retromolar canal and the variability in RMF appear to be largely due to genetic differences. Chávez-Lomeli et al. [4] proposed that the mandibular canal is originally separated as at least three independent canals during the fetal period. At different stages of development, the three canals, each with their own independent foramens, connect to the incisors, primary molars, and permanent mandibular molars, respectively. When these canals are completely merged, a typical mandibular canal without any branches is formed. If these canals and their foramens do not undergo fusion and are retained, they may form a branched variation of the mandibular canal.
Several scholars have performed histopathologic investigations and verified that striated muscle fibers, myelinated nerve fibers, muscular arteries, and venules pass through the retromolar canal [5,6]. When a dentist is performing an operation, such as flap elevation with local anesthesia, osteotomy, insertion of dental implants, endodontic surgery, or surgical removal of roots or teeth and fails to notice the patient’s retromolar canal, injuring the anatomical structure may cause local anesthetic insufficiency or even hemorrhage during the operation [7]. Therefore, understanding the prevalence of the retromolar canal and its location is crucial [3,8,9,10,11,12].
The RMF is an opening at the retromolar canal located at the retromolar trigone behind the last mandibular molar [13,14,15,16]. Numerous approaches have been applied to determine the presence of RMF, such as the use of wires with a diameter of 0.5 mm to verify whether RMF is present on individuals’ dry mandible, panoramic radiograph, and measurement using cone-beam computed tomography (CBCT). The diverse research methods have resulted in a wide-ranging RMF prevalence rate (0–72%) [13]. Furthermore, because the retromolar canal and RMF are not present in all people, they are often overlooked. Relevant literature on the three-dimensional retromolar canal and two-dimensional RMF of the Asian population is rare. Thus, the objective of this study was to evaluate the prevalence of RMF in the Taiwanese population and the relative position of RMF, thereby providing a reference for dentists when performing anesthesia and treatments in the posterior mandible.

Dental CBCT images were obtained from 68 Taiwanese patients (30 men and 38 women) at China Medical University Hospital, Taiwan. The CBCT scans were performed using the Asahi AZ3000 (Asahi Roentgen Ind. Co., Kyoto, Japan) with the following technical parameters: 85 kV, 12.5 mA, 155 µm voxel resolution, and 70 mm field of view (FOV). All patients underwent CBCT scans as part of surgical assessments for dental implant insertion or endodontic treatment. Because of the small FOV, each dental CBCT only provided an image of one side of the mandible. Therefore, each dental CBCT only imaged the left or right mandible. Thus, 68 hemi-mandibles were evaluated in this study. Of the 68 CBCT images, 33 images (of 13 men and 20 women) and 35 images (of 17 men and 18 women) were of the left and right side of the mandible, respectively. This study was executed with the ethical approval of the Institutional Review Board of China Medical University Hospital (CMUH108-REC2-083).

2.2. Measurement of the Prevalence of the Retromolar Canal and its Spatial Position in the Mandible

The Shapiro–Wilk test was used to verify that all measurements conformed to a normal distribution. Therefore, the mean and standard deviation were calculated for all measurements. For the three parameters, the two-sample t-test was used to compare the differences between the left and right sides of the mandible and between men and women. All statistical analyses were conducted using SPSS version 19 (IBM Corporation, Armonk, NY, USA), and the significance level was set to p < 0.05.

The study was conducted according to the guidelines of the Declaration of Helsinki, and ap-proved by the Institutional Review Board of China Medical University Hospital (protocol code: CMUH108-REC2-083 and date of approval: 2019/07/03).

Patient consent was waived due to the retrospective nature of the study. 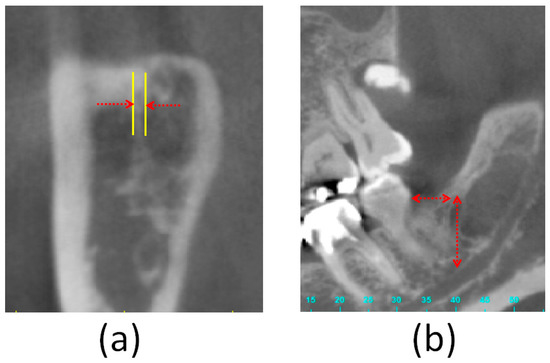 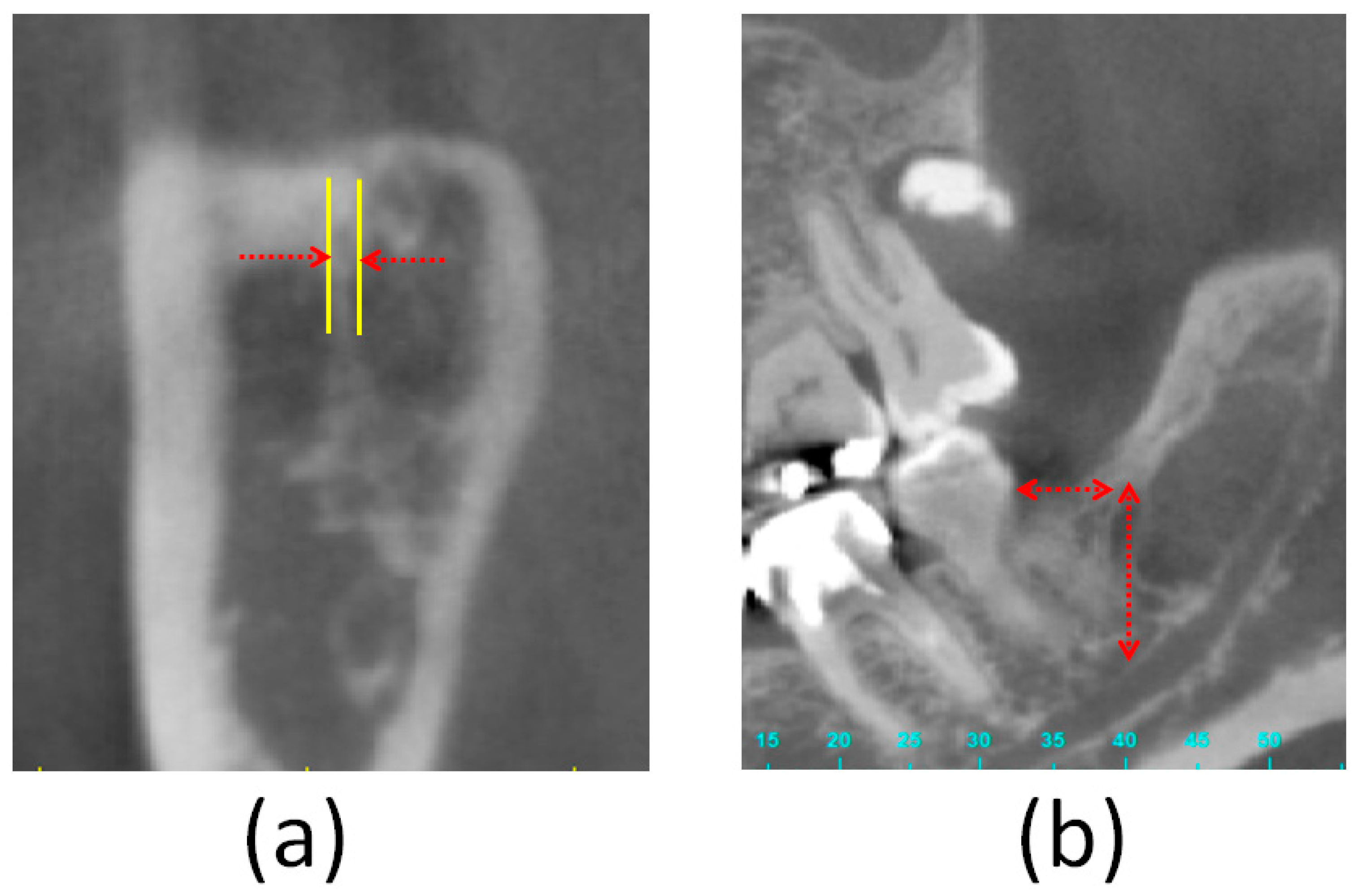