A Radiogenomics Ensemble to Predict EGFR and KRAS Mutations in NSCLC

Amyotrophic lateral sclerosis (ALS) is a neurodegenerative disease characterized by the progressive death of upper motor neurons (UMNs) of the primary motor cortex and corticospinal tract (CST), in conjunction with lower motor neurons (LMNs) associated with the anterior horns. Despite the recognition of UMN and LMN involvement as a characteristic signature, the mean diagnostic delay among ALS patients is around 12 months, primarily due to patients being misdiagnosed with more common diseases that might mimic the early stages of ALS [1]. The long diagnostic delay underscores the dearth of robust and sensitive clinical biomarkers in ALS. Clinical indicators of disease status, such as Revised ALS Functional Rating Scale (ALSFRS-R), electromyography (EMG), and muscle strength tests, may be confounded by inter-rater variability and/or low sensitivity to ALS; these factors are further compounded by the clinical heterogeneity of disease onset and progression. The efficacy of ALSFRS-R as a measure of clinical outcome can also be affected by the underreporting of functional impairment severity [2]. Hence, there is an urgent need to establish robust, non-invasive, and quantitative biomarkers that can serve as early and specific diagnostic and prognostic indicators of disease.
Although current literature on motor neuron dysfunction in ALS is extensive, there is a continuing debate about whether motor neuron death is of a forward (UMN spreading to LMN) or backward (LMN spreading to UMN) nature [3]. Irrespective of the progression pathway, neuromuscular junction degeneration leads to skeletal muscle denervation and is known to accompany clinical symptom onset. Symptomatically, around 75% of ALS patients present limb muscle weakness, while others present a bulbar onset [4,5].
To date, the clinical role of magnetic resonance imaging (MRI) in ALS has primarily been limited to exclusion of other neurodegenerative diseases that present similar symptoms to ALS [6]. Advanced quantitative imaging methods, while promising, have predominantly focused on evaluating singular pathologic characteristics, such as the disrupted fiber tracks of UMNs [7,8]. Clinically, LMN dysfunction is primarily assessed using electromyography [9], electrical impedance myography [10,11], muscle ultrasonography [12] or muscle biopsies [13]. Previous imaging studies have employed semi-quantitative or quantitative approaches to characterize the LMN pathways of ALS disease progression [10,11,12]. One of the earliest studies of ALS muscle demonstrated that while edema regions exhibit relative T1 and T2 signal increases, fatty infiltration causes relative T1 to decrease and relative T2 to increase [11]. Another study used the relative T2 signal approach, wherein the authors additionally implemented a whole-body imaging protocol for their study [14]. They demonstrated that for ALS patients with bulbar, upper extremity, or lower extremity onset, the affected muscle regions exhibited increased relative T2 signal when compared with healthy muscle. More recently, diffusion-weighted imaging (DWI) has been added to this whole-body approach [14] and used to longitudinally evaluate patients over 12 months. The authors concluded that relative T2 signal, in comparison with DWI, was most effective at detecting longitudinal changes in leg muscle groups. A more quantitative approach was implemented when evaluating skeletal muscle differences in spinal and bulbar muscular atrophy (SBMA) and ALS patient populations when compared with healthy controls [15]. Fatty infiltration due to atrophy occurring from muscle denervation was quantified using m-Dixon-based fat fraction measures, and a semi-quantitative short tau inversion recovery (STIR) imaging approach was employed to evaluate edema arising from denervation in thigh, calf and tongue muscles. The fat fraction measures were more sensitive to differentiating SBMA muscle from healthy muscle, while ALS muscles were better identified using the STIR-based approach.
While longitudinal studies have established the potential for muscle imaging to interrogate motor neuron disease progression using relative signal changes and quantitative measures of fatty infiltration [16], there remains a need for robust, quantitative, and sensitive imaging biomarkers to characterize LMN dysfunction, and in particular, ones that interrogate ALS-associated myofiber pathology. Biomarkers that are sensitive to myofiber architecture could enable more robust detection of disease progression and therapy response, as compared with downstream and indirect surrogates of disease status, such as edema. Contrast-enhanced MRI techniques have been successfully used to characterize tissue pathophysiology. We recently showed that, by simultaneously quantifying T1 and T2* changes associated with the dynamic contrast agent passage, a unique parameter that reflects cellular microstructure can be quantified—a technique previously termed relaxivity contrast imaging (RCI) [17]. In particular, the contrast agent’s transverse relaxivity at tracer equilibrium, or TRATE, is an RCI parameter that is shown to be predominantly sensitive to cellular microstructure [18]. Given the microstructural changes in muscle myofibers that accompany, and potentially precede, muscle degeneration and atrophy, the purpose of this study is to provide the first evaluation of TRATE as a quantitative, noninvasive muscle imaging biomarker for ALS characterization and progression.

This study was approved by our institutional review board with informed consent obtained from each participant. The study group consisted of healthy control (12 participants, mean age: 51 ± 18 years, 8 female, 4 male) and ALS patient (14 participants, mean age: 65 ± 8 years, 7 female, 7 male) cohorts. All ALS patients included were diagnosed based on the modified El Escorial criteria [19], with time since diagnosis less than 24 months. All study participants underwent an MRI exam of the lower extremities. A subset of the ALS patient group (6 participants, mean age: 68 ± 6 years) underwent a second MRI exam after an average duration of 6 months to record longitudinal changes. In addition, in the ALS patients, reference clinical measures, namely hand-held dynamometry (HHD) of the hip flexors, knee flexors, knee extensors and ankle dorsiflexors and the ALSFRS-R, were performed before each imaging time point. Global function and lower-limb function were assessed from the ALSFRS-R scores. The ALSFRS-Rtotal score was obtained by adding the individual score responses in the questionnaire. The ALSFRS-RLL was obtained by adding the individual score responses to lower-limb function in the questionnaire. Quantitative strength testing primarily assays the peripheral motor component of ALS and was measured using HHD as outlined in previous literature [20]. The lower limb HHD scores (HHDtotal-left and HHDtotal-right) were obtained as the sum of HHD scores for left and right hip-flexion, knee-flexion, knee-extension, and ankle dorsiflexion.

All study participants underwent MRI on a 3T Ingenia (Philips, The Netherlands) scanner using both the FlexCoverage anterior and posterior body coils (Philips, The Netherlands) across both lower extremities (left and right calf muscle region). The participants were scanned feet first in a supine manner.
The study protocol consisted of an anatomical T1-weighted sequence, a multi-point mDixon Quant scan to obtain measures of fat fraction in the calf muscle, a multishot turbo spin echo (TSE) sequence to obtain T2 maps, a variable flip angle (VFA) approach to measure baseline T1 maps, and a multi-echo gradient echo (GRE) sequence to obtain the pre- and post-contrast measures of the transverse relaxation rate (R2*). In addition, a dual gradient echo dynamic scan was performed during the injection of a gadolinium-based contrast agent (Gadavist; 0.1 mmol/kg) to collect RCI data, enabling the quantification of contrast agent concentration and contrast agent T2* relaxivity. The contrast agent was injected at the rate of 2 mL/s after acquiring 90 s of baseline data using a power injector followed by a saline flush. The scan parameters are provided in Table 1. The total scan time was approximately 32 min per participant.

Image analysis was performed using an in-house developed code in MATLAB (MathWorks Inc., Natick, MA, USA). All data were registered to the T1-weighted anatomical data using FLIRT (FSL) [21] with 12 degrees of freedom. Muscle groups from the anterior (Tibialis Anterior (TA), and Peroneus Longus (PL)) and posterior (Tibialis Posterior (TP), Lateral Gastrocnemius (LG), and Medial Gastrocnemius (MG)) regions of the calf were manually identified for postprocessing and analysis, on a slice-by-slice basis, by a scientific researcher (SR) with 6 years of MRI experience. TRATE [18] values were computed as the ratio of at contrast agent equilibrium (last 10 time points in the dynamic series), where Ct is the contrast agent concentration, computed as . maps were calculated from the dual echo dynamic data as previously described [22]. Pre-contrast T1 maps were obtained using the variable flip angle approach [23]. TRATE estimates in the 5 muscle ROIs were compared with fat fraction (generated on scanner host by Philips post-processing) and T2 values (generated on scanner host by Philips post-processing) between ALS patients and healthy controls. Longitudinal TRATE estimates were also compared with ALSFRS-R (total and lower limb) and HHD (lower limb) scores among the ALS population.

All statistical analysis was performed in MATLAB (MathWorks Inc., Natick, MA, USA). TRATE, fat fraction and T2 estimates were compared between ALS-affected muscle and healthy control muscle using a paired t-test for each muscle group. The normality of the ROI-based population data was determined using the Lilliefors and Anderson-Darling tests. p values less than 0.05 were considered significant (two-tailed). Statistical analysis was not performed on the longitudinal data due to the limited number of available datasets (N = 4).

The study was conducted according to the guidelines of the Declaration of Helsinki, and approved by the Institutional Review Board (or Ethics Committee) of BARROW NEUROLOGICAL INSTITUTE (protocol code: BNI-ALS-002 and ALSA-BIO3).

The authors would like to acknowledge Jessie Duncan, Clinical Research Specialist and Nicole Turcotte, Research Program Manager at the Gregory W. Fulton ALS and Neuromuscular Disease Center for their contributions towards study participant recruitment and administering clinical measures. 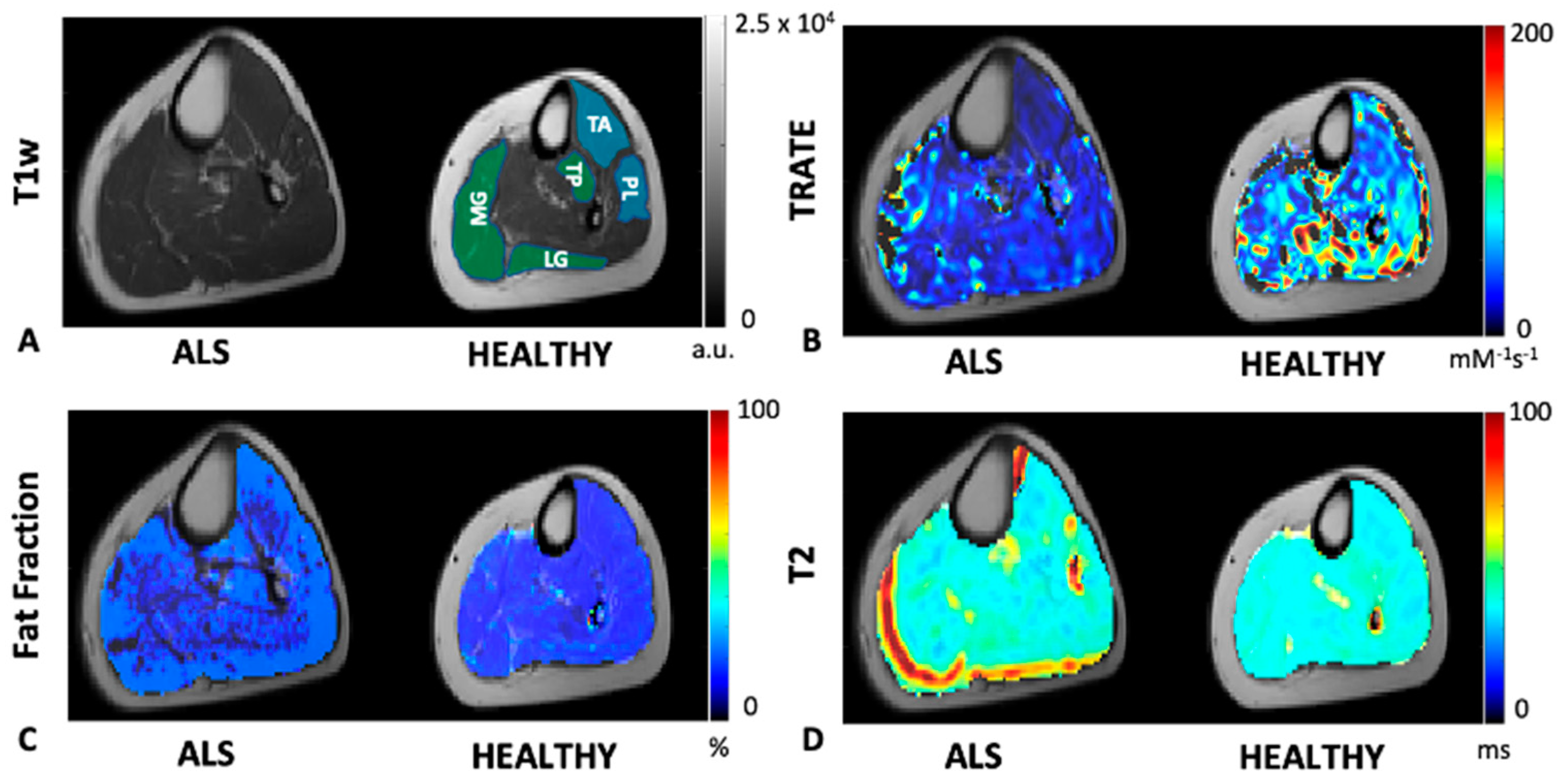 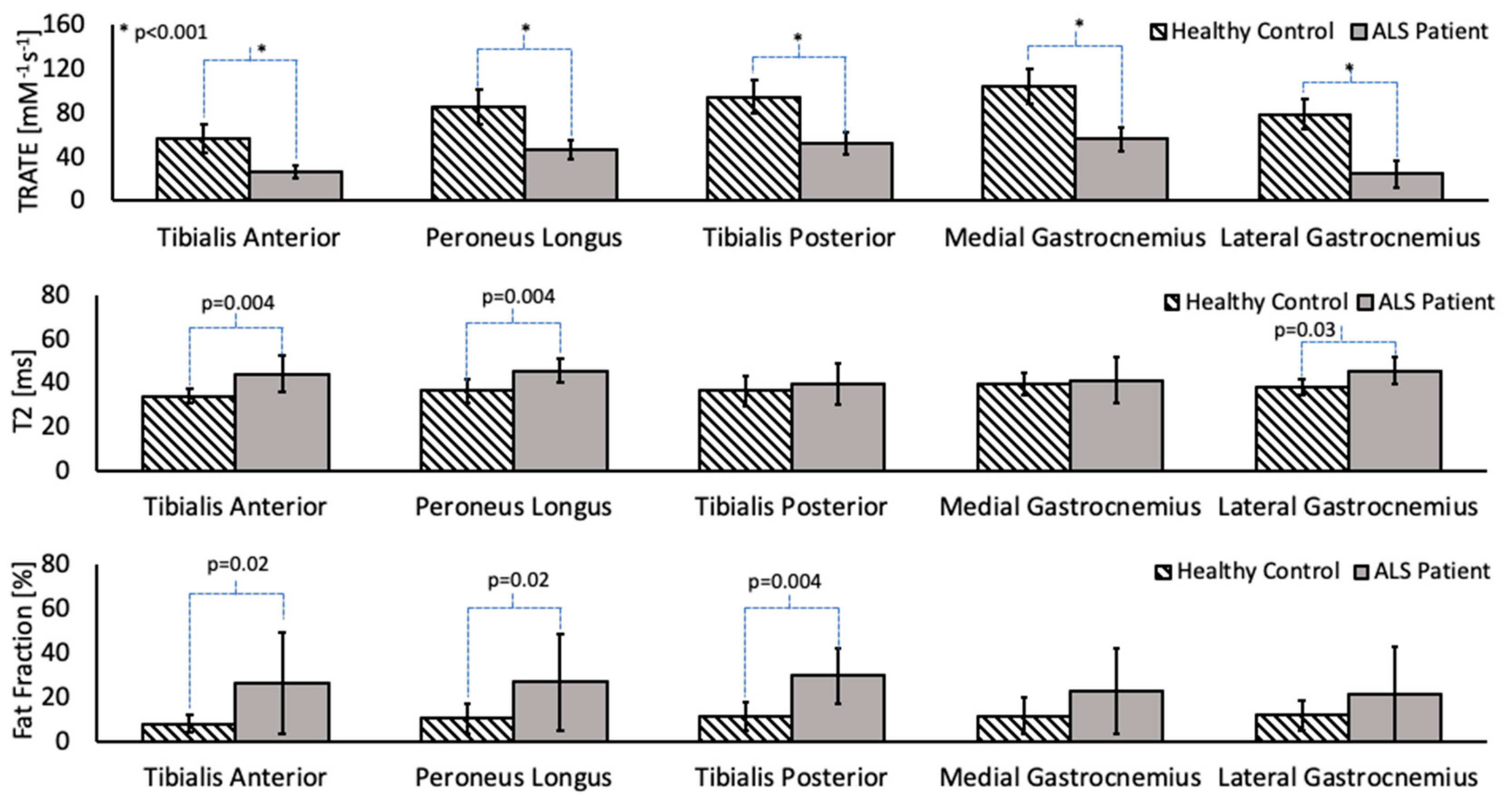