3D visualization methods of human bone and organs were applied to diagnosis as long as 100 years ago [1]. Normally, 3D medical imaging system aims to provide both quantitative and qualitative information for diagnosis. 3D visualization system can be divided into 4 operations: (1) preprocessing that deals with the volume of interest and features extraction; (2) visualization processes generate 3D object from 2D images; (3) manipulation explains the geometry of object that can be distorted and deformed; (4) analysis that deals with methods of quantify 3D object [2]. For medical volumetric rendering where 2D binary images (CT-volume) are feed to construct 3D object, collision detection algorithm is used to manipulate the intersecting fragments and generate triangulated mesh models (see Figure 1a). The doctor can take this advantage of training by observing the demonstration of context of 3D manipulation of bone fragments and the resulting CT images [3]. More works of 3D visualization such as texture mapping and semi-automatic image segmentation. Texture mapping technique constructs 3D object by interpreting the spatial relationships of 2D binary images and generates 3D visualization of perspective-mapped from each image layer [4]. Whereas, semi-automatic image segmentation allows the doctor to make the segmentation of subject by the area of interest [5]. Therefore, the major drawback of these methods is the computational cost of real time resampling for making texture in 3D object reconstruction process [4], and infeasibility for each individual segmentation [5] (see Figure 1b,c). The alternative choice for 3D volumetric rendering is marching cubes. The marching cubes method keeps the coordinates conveyed by traversing the outline of 2D binary shape and marches them to construct 3D object [6,7,8,9,10]. The algorithm is based on the configuration of 15 fundamental cubes (see Section 2). Figure 2 shows 3D human head model constructed by marching cubes method; the method used 150 slides of 2D image as input source.
It seems like the marching cubes can reduce the computational time used for resampling in 3D reconstruction, but the problem still remains in observing the qualitative information of 3D surface constructed using marching cubes. One major problem of marching cubes is the unused voxels which can be generated during parsing the coordinates and the intensity values of 2D images, these unused voxels affect for the smoothness of 3D surface (the detail of the surface smoothness will be explained in Section 4 and Section 6). To overcome this drawback, this paper introduces histogram pyramids with marching cubes method for 3D medical volumetric rendering. The histogram pyramids organize the image entries to form the voxel related to the index values, the traversal of histogram pyramids is used to construct the point list that will be later used for generating the voxel. The organization of paper consists of (1) Introduction, (2) The brief concept of marching cubes method, (3) Reading the intensity value of CT images for 3D rendering, (4) Histogram pyramids, (5) Implementation, (6) Results, and (7) Conclusion and future works.

Original marching cubes algorithm was developed by [6], later works applied this algorithm for 3D rendering using 2D medical images (CT: Computed Tomography Scan, MRI: Magnetic Resonance Imaging, and SPECT: Single-Photon Emission Computed Tomography) sequence as an input. The marching cubes algorithm will be explained later in this section. More works of volume rendering techniques such as [7] used sampled scalar functions for displaying 3D surfaces, [8] presented the extended version of volume rendering that used to handle images with mixtures properties (color and texture). To deal with the boundary value problems which are the main task for detecting the outline of 2D binary shape, [9] applied the shortest path analysis to the speed function and used it to solve an unknown in the surface function. [10] used the endoscope images for 3D surface reconstruction; the sophisticated equipment was used as the fine-tuned measurement of object together with 3D grid that would be fit for the specific endoscope image.
As mentioned earlier, marching cubes algorithm is based on the configuration of 15 fundamental cubes [6]. 2D medical images (slides) contained the scalar value of gray scale will be used to construct the cubes based on their indexes correspond to the configuration of 15 fundamental cubes as shown in Figure 3. Based on [13,14], a cube consists of eight vertices that can contain two values of 0 and 1; note that the value of 0 implies that there is no information conveyed in the vertex (the vertex will not be used to form the next cube for 3D object rendering), whereas the value of 1 implies that the vertex contains the information and will be used to configure the next cube as the connecting vertex.
The first step of vertex configuration to form the cube begins with connecting the upper slice; the first four vertices locate in lower slice and the second four vertices will be in the upper one as illustrated in Figure 4. Next, the algorithm will determine the inner cut within the cube by using these criterions:
Therefore, they will have 28 = 256 combinations per one cube (2 = two values of 0, 1; 8 = number of vertices in 1 cube).
The third step of marching cubes is the creating of index; the index will be used to match the configuration of 15 fundamental cubes in Figure 3. Figure 5a shows the configuration of index and Figure 5b shows the example of index that contains the value = 01000001, this index matches the cube no. 4 in Figure 3. It means that the cube will be sheared off at edge no. 1, 4, 9 (e1, e4, e9) and edge no. 6, 7, 12 (e6, e7, e12), respectively. In the last step of marching cubes, the algorithm will determine the direction of the cut using normal vector (see Figure 6).

3. Reading the Intensity Value of CT Images for 3D Rendering

The first step for obtaining the intensity value of medical images begins with reading the coordinates and values then store them in the data structure of the system, e.g., the binary image with dimension of 256 × 256 will be read and kept in the array. The input array will be manipulated for marching cubes and histogram pyramids. Figure 7 shows the binary image and grid structure used for dividing image into 128 × 128 segments.
The marching cubes algorithm will generate 3D visualization of 2D binary images by manipulating in form of width x height of image; e.g., in MRI, the resolution is determined by the number of pixels in a specified FOV (Field-of-view), for FOV = 320, the input image with dimension of 320 × 320 will obtain the amount of data = (320 + 1) × (320 + 1) = 103,041; these data will be stored in the array [0, …, 103,040]. The data that will be kept in the array is the intensity value of input image; in the gray-scale image, the range of gray-scale values are varying from 0 to 255 (256 intensity values). The rendering process will be computed starting from the first slide until the last slide of images (k, …, k + 1) as illustrated previously in Figure 4. Figure 8 shows the CT images sequence.

The CT/MRI of 32/64/128 slides must be provided to use as input images. Figure 11 shows the MRI slides of human knee.
Two important parameters will be read: the coordinates and the intensity values; the point list of histogram pyramids will be computed for marching cubes process. The user interface of the program is shown in Figure 12, the program may prompt to the user for rotate the result 3D object and toggle to the wireframe mode. The screen captured of the program is also shown in Figure 12.

This research was funded by the King Mongkut’s University of Technology North Bangkok. Contract no. KMUTNB-GOV-60-53. 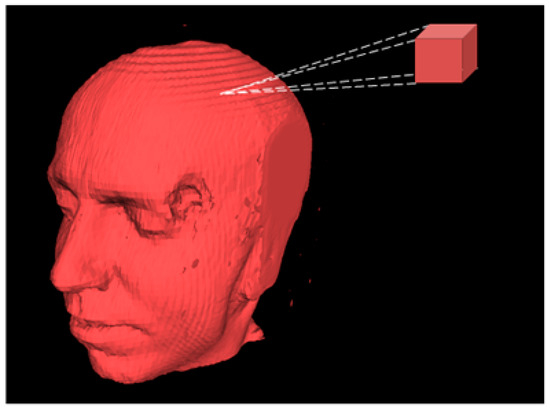 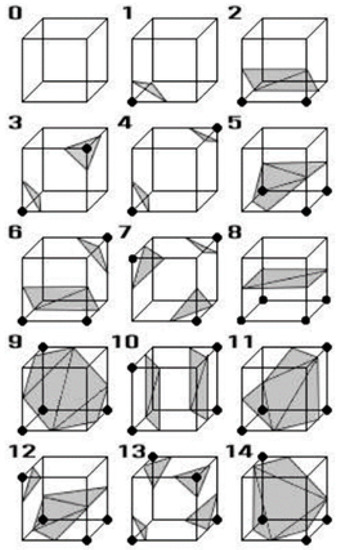 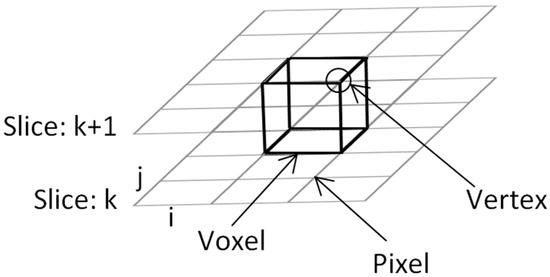 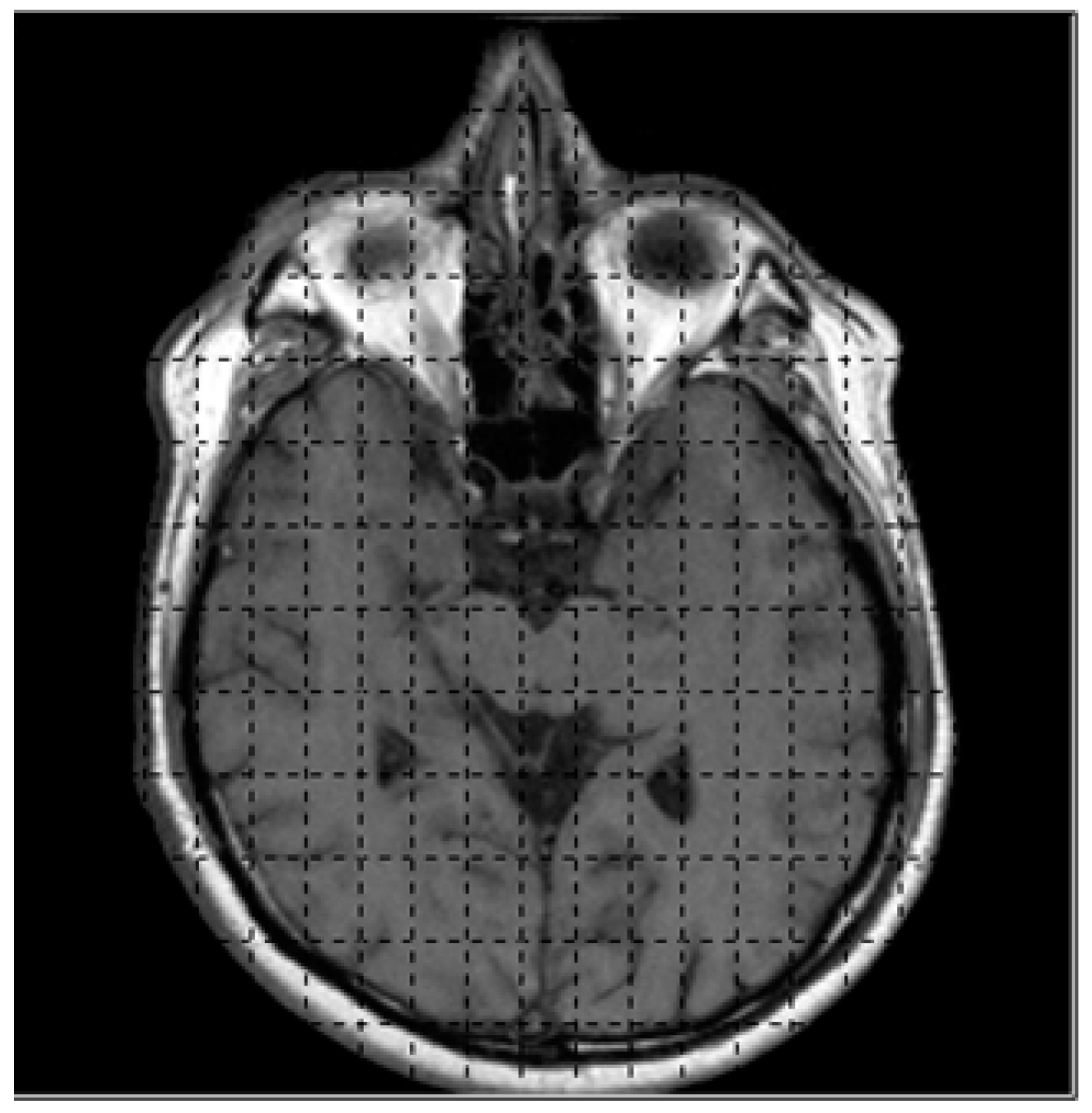 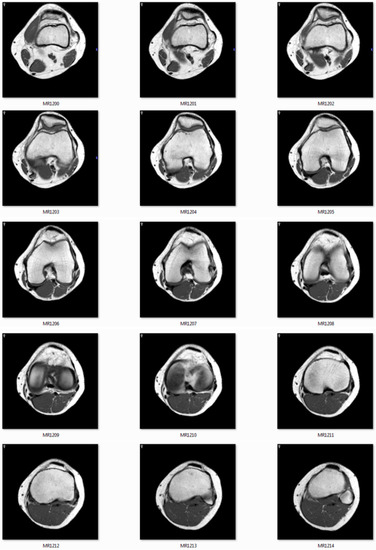 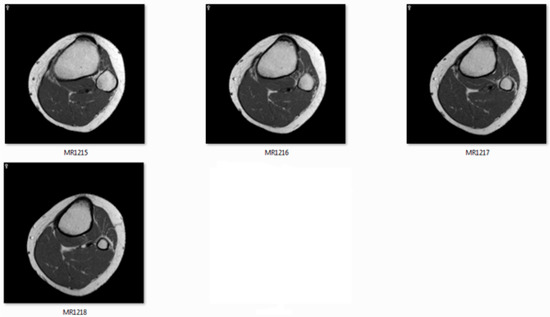 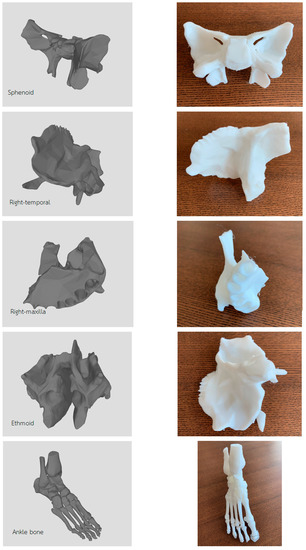 Table 1. The experimental results.
Table 1. The experimental results.
© 2020 by the author. Licensee MDPI, Basel, Switzerland. This article is an open access article distributed under the terms and conditions of the Creative Commons Attribution (CC BY) license (http://creativecommons.org/licenses/by/4.0/).
We use cookies on our website to ensure you get the best experience. Read more about our cookies here.
Accept
We have just recently launched a new version of our website. Help us to further improve by taking part in this short 5 minute survey here. here.
Never show this again