The Energy and Carbon Footprint of an Urban Waste Collection Fleet: A Case Study in Central Italy
Previous Article in Journal

On the Production of Potassium Carbonate from Cocoa Pod Husks

Minimizing Organic Waste Generated by Pineapple Crown: A Simple Process to Obtain Cellulose for the Preparation of Recyclable Containers

In this study, cellulose was obtained from the residues of pineapple crown by means of simple acid pretreatment and subsequent alkaline treatment. The pretreatment consisted of washing, drying, and chopping with high shear at pH = 5 under heating. The content of cellulose, hemicellulose, and lignin in the pineapple crown was determined by chemical methods. The cellulose obtained was compared with commercial cellulose by Fourier-transform infrared (FTIR) spectroscopy, thermogravimetric analysis, and X-ray diffraction (XDR). Thus, from the obtained fiber cellulose, a food container was prepared, and its physical-mechanical properties were determined. Then, after alkali treatment, the purity of cellulose was 84.7% from the pineapple crown (56.0%) and was compared with commercial cellulose (95%). FTIR results confirmed the removal of the non-cellulosic compounds after alkali treatment. The maximum pyrolysis temperature increased to 356 °C, higher than the original fiber (322 °C), indicating greater thermal stability after chemical treatment. Furthermore, the crystallinity increased to 68% with respect to the original fiber (27%). The physical properties of the container showed a decrease in the parameters in wet 95% RH, as expected, thus facilitating its reuse. These results indicate that the pineapple crown cellulose can be obtained with significant purity, from a single chemical treatment. In addition, this polymorphous cellulose can be used to make ecofriendly reusable food containers. View Full-Text
Keywords: pineapple crown; cellulose fiber; high-shear homogenization; food container pineapple crown; cellulose fiber; high-shear homogenization; food container
►▼ Show Figures 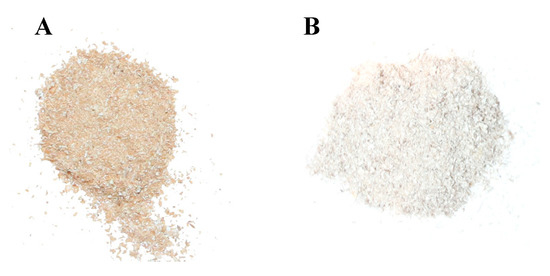