Explorations of Magnetic Properties of Noble Gases: The Past, Present, and Future
Next Article in Special Issue

In a semi-review paper, we show that the hidden Jahn–Teller effect (JTE) and pseudo-JTE (PJTE) in molecular systems and solids, under certain conditions lead to the formation of two coexisting stable space configurations with different magnetic and dielectric properties, switchable by external perturbations. One of the stable configurations has a high space symmetry and a non-zero or higher spin (HS) (non-zero magnetic moment), the other being distorted, but with zero or lower spin (LS). The number of systems with hidden JTE or PJTE is innumerable; we demonstrate this on the (no exhaustible, too) group of systems with half-filed closed-shell degenerate electronic (orbital or band) configurations e2 and t3. The spin-crossover-change from the high symmetry HS arrangement to the low-symmetry LS geometry is accompanied by (driven by the PJTE) orbital disproportionation, in which the system prefers spins-paired states with two electrons on the same orbital (and lower symmetry charge distribution) over the Hund’s spin-parallel arrangement involving several orbitals. Ab initio calculations previously carried out on a series of molecular systems and clusters in crystals, including CuF3, Si3, Si4, Ge4, C4H4, Na4−, C603−, CuO6 (in two crystal environments, LiCuO2 and NaCuO2), etc., confirmed the general theory and allowed for estimates of the parameter values including relaxation times. The hidden JTE and PJTE are thus general tools for search and studies of polyatomic systems with bistabilities. View Full-Text
Keywords: magnetic-dielectric bistability; spin crossover; Hidden Jahn-Teller effect; Hidden pseudo-Jahn-Teller effect; orbital disproportionation magnetic-dielectric bistability; spin crossover; Hidden Jahn-Teller effect; Hidden pseudo-Jahn-Teller effect; orbital disproportionation
►▼ Show Figures 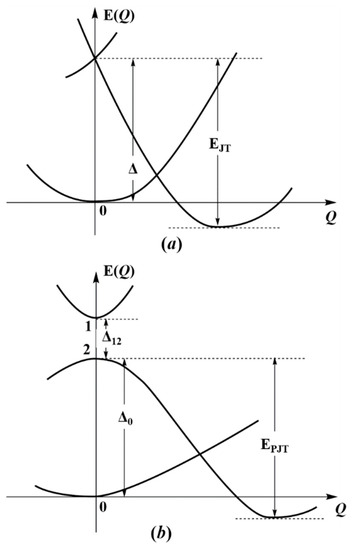